Acoustic Anarchy, is the first solo exhibition of Mr. and Mrs. Sabtotage (SBTG), also known as Mark Ong and Sue-Anne Lim. This showcase celebrates their decade of true originality, grit and individuality.

Acoustic Anarchy, is the first solo exhibition of Mr. and Mrs. Sabtotage (SBTG), also known as Mark Ong and Sue-Anne Lim. Under their parent company “Royalefam". Tthey are well-known to a wide audience of fans for a decade of handcrafted custom sneakers and street wear. This showcase celebrates their decade of true originality, grit and individuality. 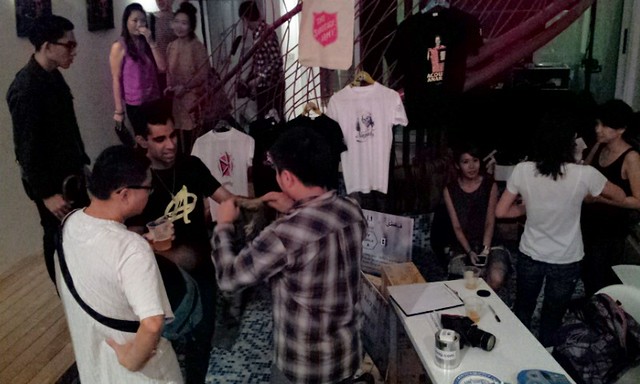 I, Weiteck, had the chance to meet up with Mr. and Mrs. SBTG; and asked them some questions bout their inspirations and, what will be their plans for the next decade and beyond.

This exhibition is a well presented showcase of their 10 years journey with archival materias and insight to the formative inspirations of Mr. and Mrs SBTG. I am looking forward to see what kind of journey will SBTG sail through in the next decade. 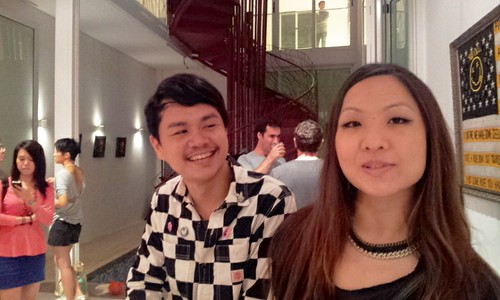 Weiteck: You have been thru a fruitful decade, what is your secret to your branding and how does the two of you stay relevant and in touch with your fans?

Mrs. SBTG: Well, the past couple of years we have chat with our supporters via Facebook daily. Guess that helps… (Put down the bottled water she been holding and turned to her Husband.)

Mr. SBTG: First of all, we know who are our target audience. That makes it easier to focus. Staying relevant is not an actual concern for us. We have always tried to express ourselves truthfully. We were never out to impress anybody. Need to focus on true expression. But we actually met up with some of our supporters on Facebook for Makan ( a meal ) session when we are in their city. (Turned to his wife.)

Mrs. SBTG: Ya, meet for Makan~

Mr. SBTG: …Sometimes we meet people that we feel we are able to connect with privately.

Weiteck: I can see that there are plenty of message that SBTG tries to present in the products.
Which is your favorite and which one have hidden meaning to you personally, which most fans are not aware of?

Mr. SBTG: I personally love the set at the front (of the gallery), when you walk into this space. That series of works that kind of reflect memories of my childhood, with my family. 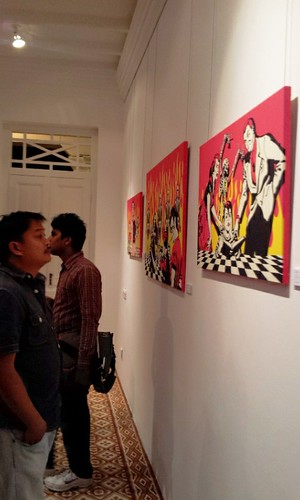 Mrs. SBTG: I love the wooden wine boxes which we converted into Colourful Light Box! 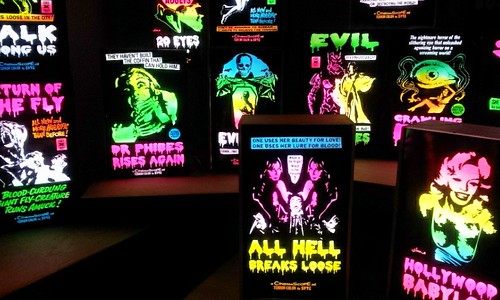 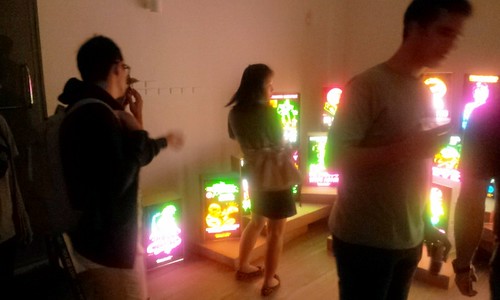 Weiteck: Yes, those at Level Three. I love those too. Tastefully done. 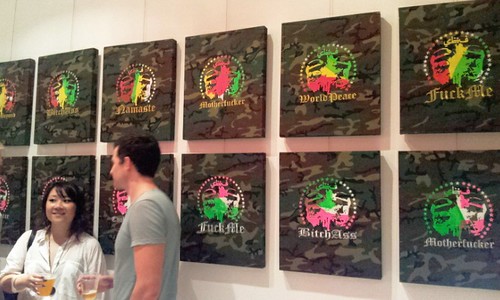 Weiteck: SBTG have done a number of collaborations with vary brands of vary items; such as shoes with Nike and Camera straps with Canon. What is the challenge in working with established commercial brand identity?

Mr. SBTG: OK Leh…think have to manage each others’ expectations loh.

Mrs. SBTG: Ya, we are used to doing our own things. For collaboration with brands, we have to work with KPI (Key Performance Indicators) and other marketing lingo!!!

Weiteck: So what will be the outlook for the next 10years? For SBTG and the creative scene in Asia in general.

Weiteck: By the way, the video on level two that is showing the both of you at work is a good intimate insight into your creative process. I heard from Jeff, it was done by your brother.

Mr. SBTG: Yes, my brother is a director. So he is able to connect personally to how we go about our creative process. 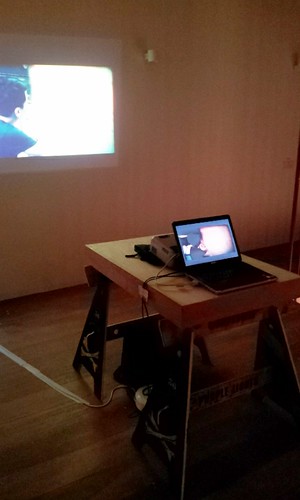 Personally, I would recommend our readers to take a look at this video that show the behind the screen footage of the items on display in this exhibition, being created.

This is the not the first time, Mr Jeffrey Koh and his FLABSLAB team invited me to this location that borders the edge of Singapore’s red light district. 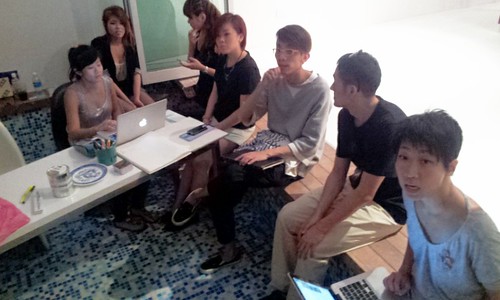 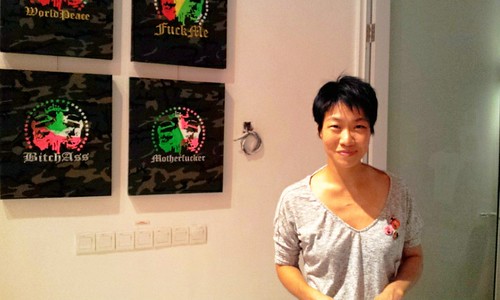 Karen Tan: We love Mark’s gutsy attitude and passion for his work. He’s always been about pushing the boundaries and it is befitting to house his first solo show on the edgy fringe that is Lorong 24A, situated in the underbelly of Singapore that is Geylang. Mark’s energy and passion for his work have seen him bravely marching off the beaten path, and having wandered off that path ourselves, we are only too proud to house the crazy world of Mr and Mrs SBTG.

Weiteck: Karen, are you able to enlighten us on how you managed to convince the investors to such project, also the reason you embark on this project.

Karen Tan: The outlook is to draw people here, by breaking the stereotype.

Weiteck: Yes, people were asking me why I am going to Geylang for this evening. For Food or…

Karen Tan: Red Light District, yes…but we have no problem with them. We are able to co-exist. We realized that this area have a lot of old buildings with beautiful façade and heritage. We want to preserve these old buildings and raise awareness. Not mainstream development; not just KTV or restaurants. There is already lot of them here.

Weiteck: I look forward to your future project!

I went to look for Jeffery of Flabslab, organiser of this exhibition, to thank him and his team for being such a good host and for putting this together this wonderful showcase.

Weiteck: Jeff, so what’s next after all the shophouses here are occupied? 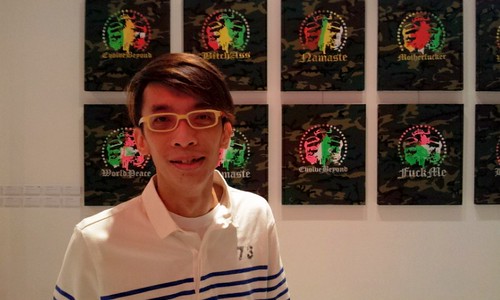 Jeffrey Koh: We will find some other space, when the chance comes; we prefer to use different space for different showcase. If we have a fixed gallery space, I feel kind of confined to that parameter. By the way Eddie (Sung) is here, he has done a collaboration with Mark (Mr. SBTG) – a collage of Eddie’s photos. (*Show on Level 2 of this exhibition.) 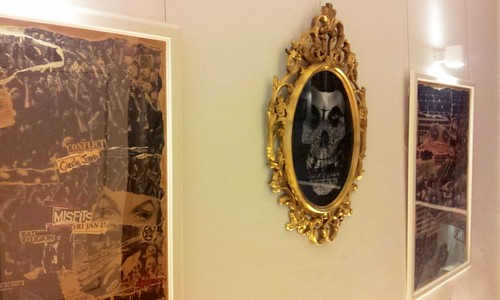 As I walked towards the bar counter (Yes, there is a bar in this shophouse that will be occupied by a business as an office space…) and spot Mr Eddie Sung with his second beer of the night, I decide to ask him a few questios.

Weiteck: Sir, so what do you think of the collage of your photos, that Mark has created?

Eddie Sung: Love it! Honoured to be asked by Mark (for this). He done justice to the images I created. 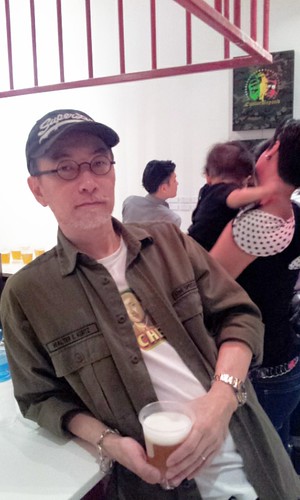 With such endorsement by someone who have shot music legends such as Eric Clapton and Lady Gaga (with his camera, not gun…) , you should drop by and take a look at the exhibition.

Acoustic Anarchy will be held at Lorong 24A Geylang, Unit 13
31August 2012 till 9 Sept 2012
From 3-8pm on weekdays and 12-6pm on weekends
For more information, please go to www.facebook.com/flabslab.