This year’s Art Stage is packed full of juicy artworks that make you want to stroke them, pick them up and take them home.

This year’s Art Stage is packed full of juicy artworks that make you want to stroke them, pick them up and take them home. 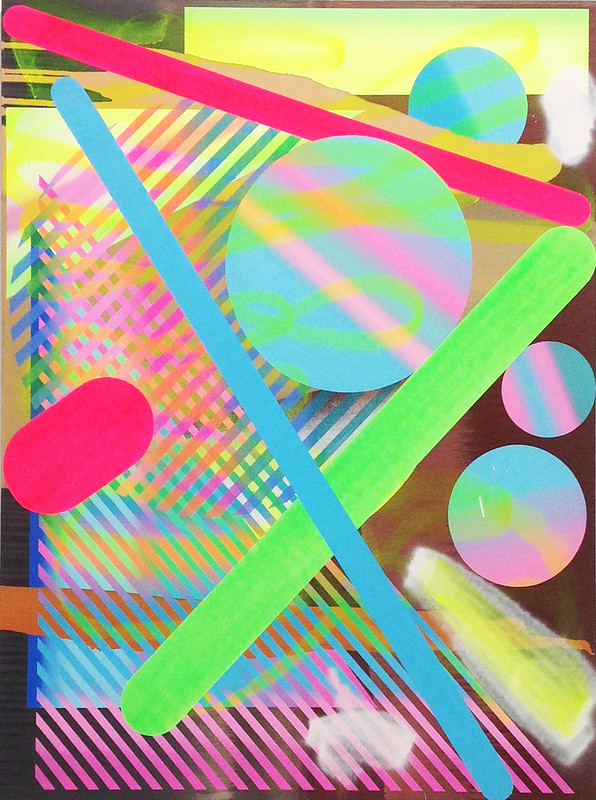 At the opening preview yesterday I picked a few of my favourites to share with you below. This year, like a moth to a flame, I found myself attracted to the artworks that employed the use of light, and a few that appeared to come alive through their inbuilt kinetic ability. 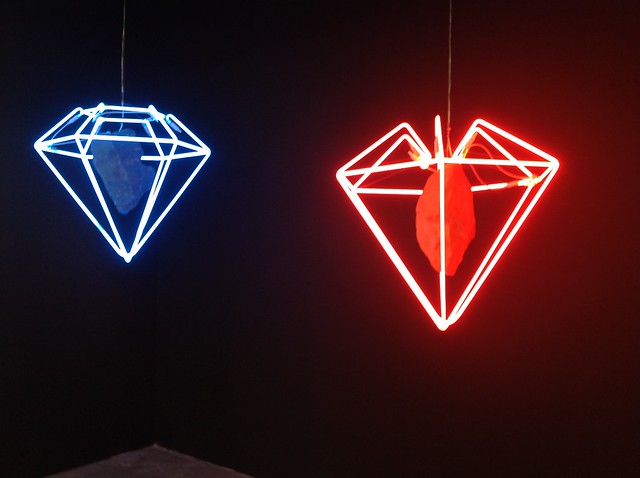 Diamond Dreams (above) was one of the first artworks to catch my eye at De Sarthe Gallery near the entrance – striking although not entirely unlike other pieces I have seen. However, turning the corner I saw a work by the same artist that I recognised – a beautiful pair of angel wings fashioned from the feathery badminton shuttlecocks that we are all so familiar with. I couldn’t help but think of the delicateness of the feathers and the forced arc of the shuttlecock flying up to heaven and falling down again to the rough asphalt. 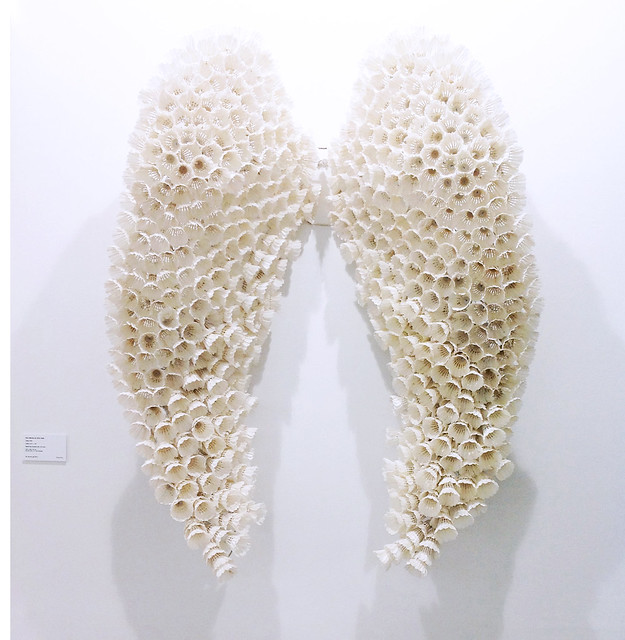 This next sculpture was a beautiful, presence-heavy kinetic artwork by Choe U-Ram at Hyundai Gallery. All the little mechanical sections slowly rotated and unwound, with a sense of solid, meditative, calmness – as if this machine is actually a great metal-feathered, bird-like creature who mesmerises all who focus on it. Also at Hyundai you can witness her suspended sculptures in the same vein — chandeliers of metal bird wings or insect parts that seem to open and close as you watch. 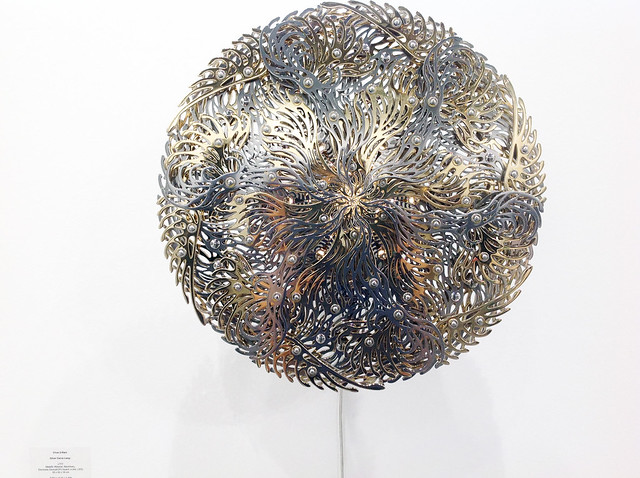 The regional platforms were the show stealers, and I do not have time here to write about all of them so I will focus on my two favourites — Japan and South East Asia.

Part of the South East Asia Platform, Jane Lee wowed with her new works on show at Sundaram Tagore who represent this renowned Singaporean artist. Best known for her inventive techniques and innovative use of materials, she explores the very nature of the way paintings are constructed by treating the components of a painting -— stretcher, canvas, and the paint itself —- in new ways. In the process, she is re-examining the significance of painting and the relevance of contemporary art practice.

Donna Ong, represented by Primo Marella Gallery, presented some of her trademark style work, including And We Were Like Those Who Dream (below). Using hand-cut pictures from antique books layered onto plexiglass, she nostalgically places the chosen images within vintage furniture, and some new treasure-box-like forms. 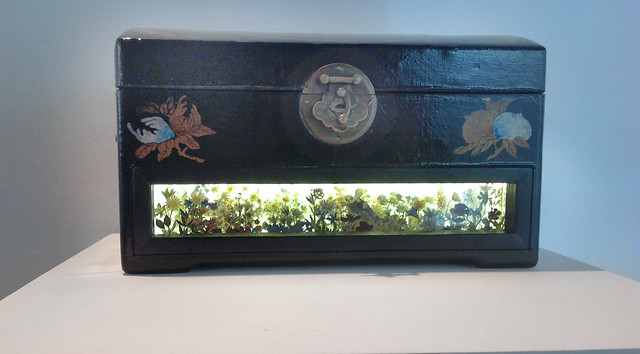 Bounpaul Phothyzan was represented by M Gallery, and his artwork Controlled Desire (below) seeks to bring awareness to Lao’s social and environmental concerns, and ultimately to the human desire to manipulate nature for self-satisfaction. His work is made of suspended fruit which are unnaturally human shaped, hovering towards a light. 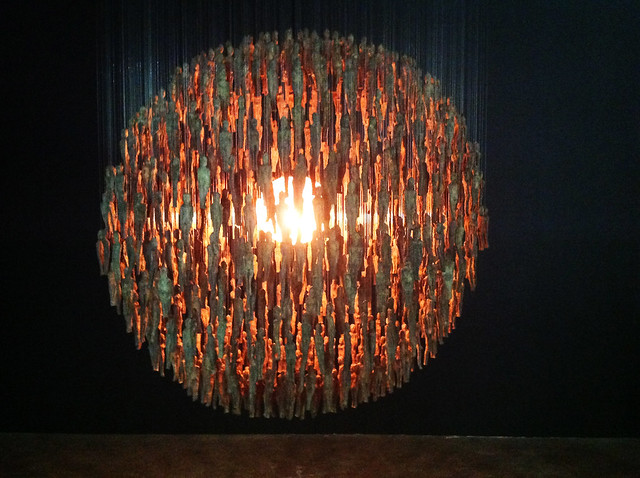 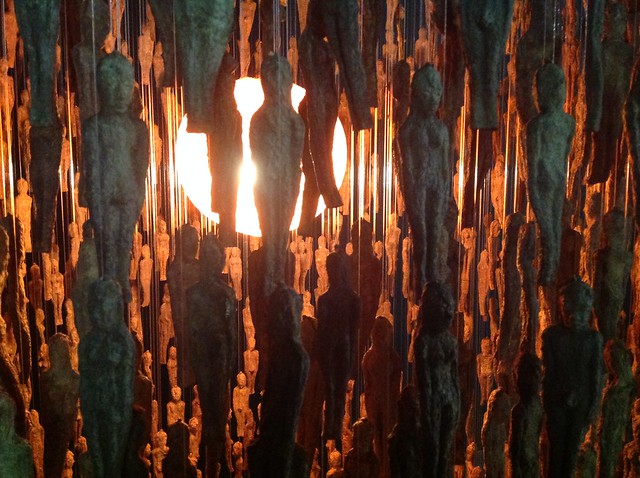 Nikki Luna from Equator Art Projects shows Survival of the Prettiest, a light box installation of deer antlers made of fabric and resin. 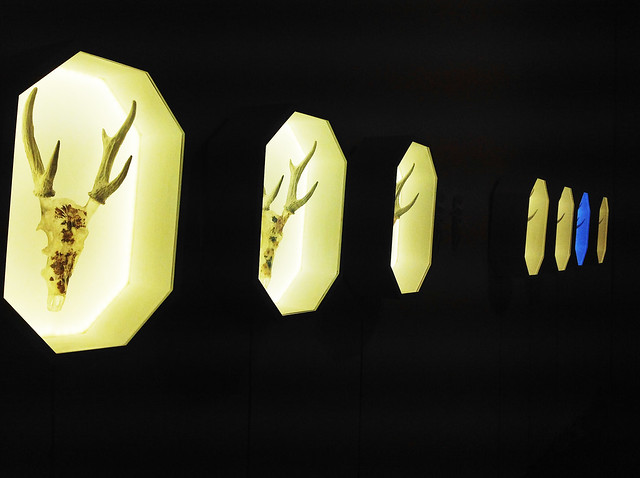 Survival of the Prettiest, by Nikki Luna

An infinitely reflective mirrored artwork by Mark Justiniani was shown by The Drawing Room Gallery. His works present a kind of surreal magical realm in which infinity is palpable. He examines the idea of Superposition, where even though our ability to perceive is limited, one thing may exist in several places at the same time, or a multitude occupies one position. 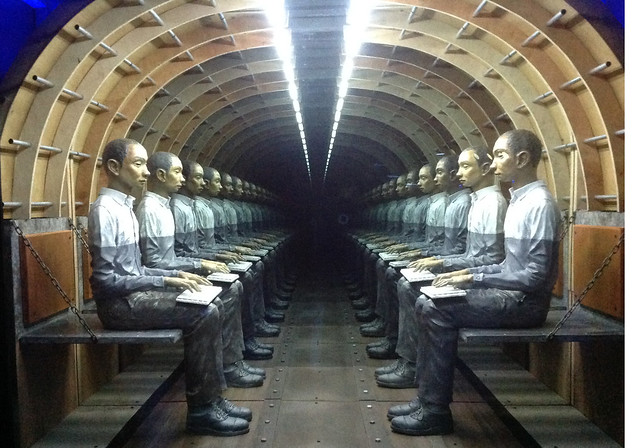 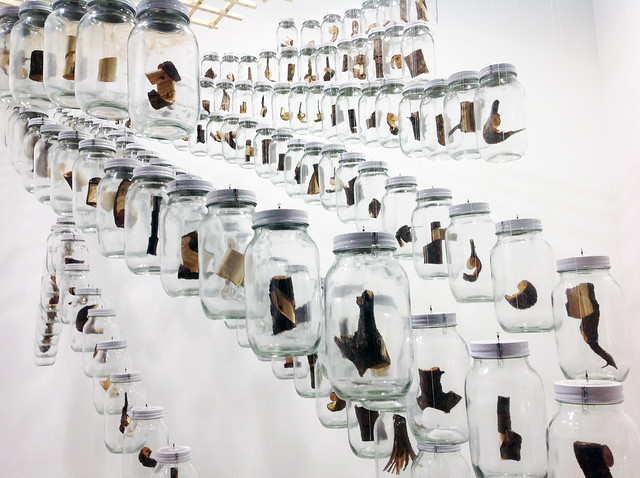 FX Harsono’s The Raining Bed shows one of his own poems flashed across a bed, inside which raindrops of water trickle down to create a satisfying element of sound and movement. The words read: “In my sleep I entangled the past, at the tip of the pen history is predicted, at the tip of the gun history is deceived, at the end of the fountain history washed away”. 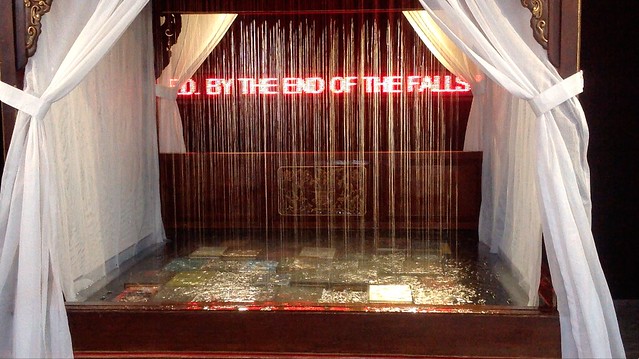 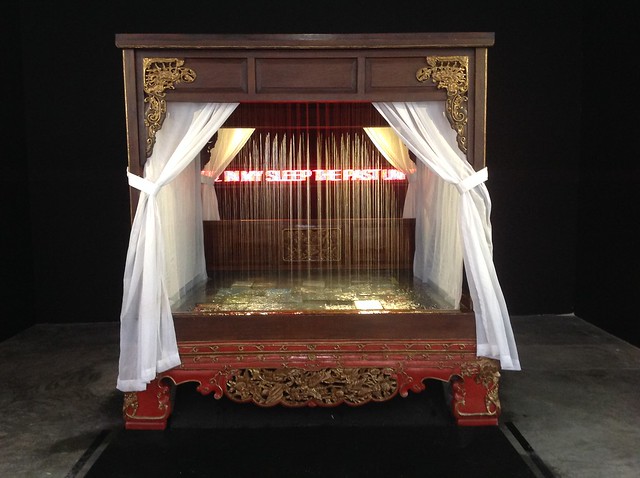 The Raining Bed, by FX Harsono

The Japan Platform also had some sparkling pieces: Satoshi Hirose, with Beans Cosmos, (Tomio Koyama Gallery), and Tatsuo Miyajima with his light-emitting diodes which refer to a collaboration with an artificial life expert, (Lisson Gallery). 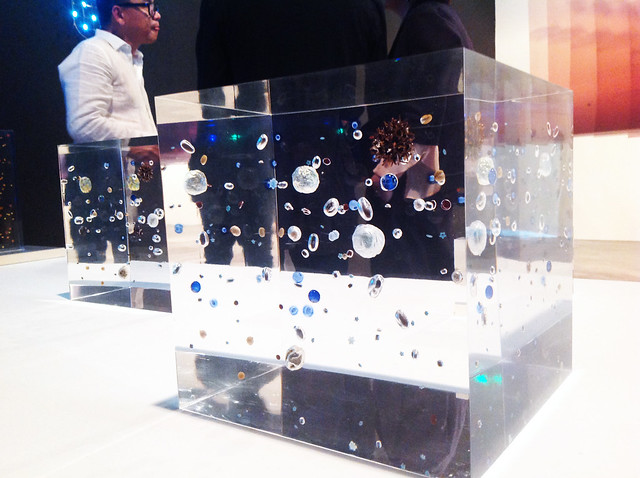 Another Japanese gallery to make an impact was Ikkan, who showcased works by Teamlab, complementing the two other exhibitions they have on at the Helutrans Artspace in Singapore currently. Teamlab showed Universe of water particles, a digital representation of a flowing, magical waterfall. The artwork felt to me both traditional and contemporary – sparks of digital technology merge to create the soft, calming form of a waterfall that is familiar to us from traditional Japanese ink drawings. 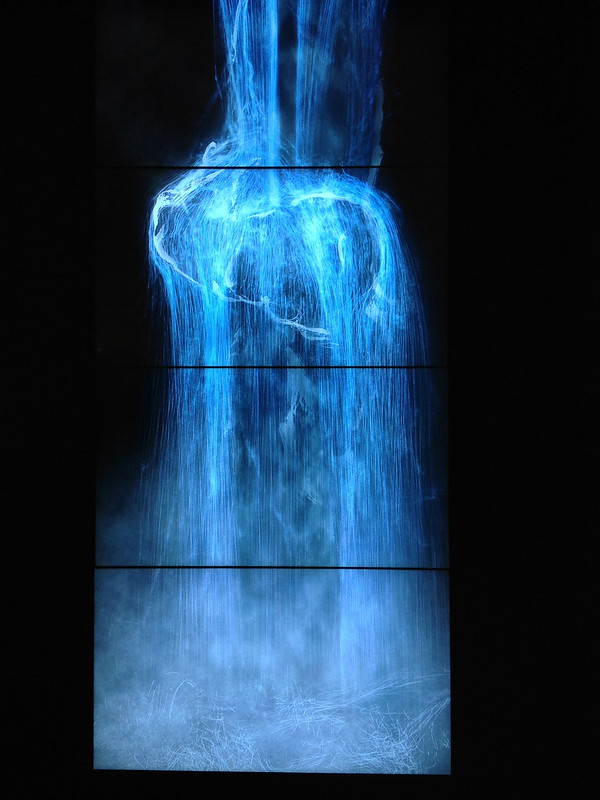 Universe of Water Particles, by Teamlab

Meanwhile Teamlab also showcased an untitled work, a long panel of a digitalised inky brushstroke, which has been rendered as a 3D structure that rotates and changes colour whilst birds land on it. I love Teamlab’s work — I am not a big fan of moving image or video-based art, but this is a whole other category. Their canvas has somehow evolved to become digitalised and time-based. 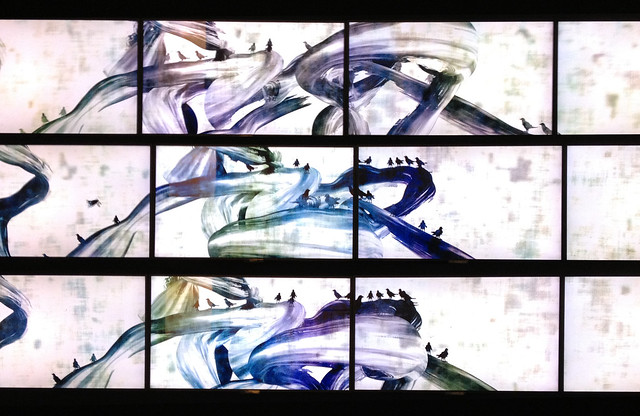 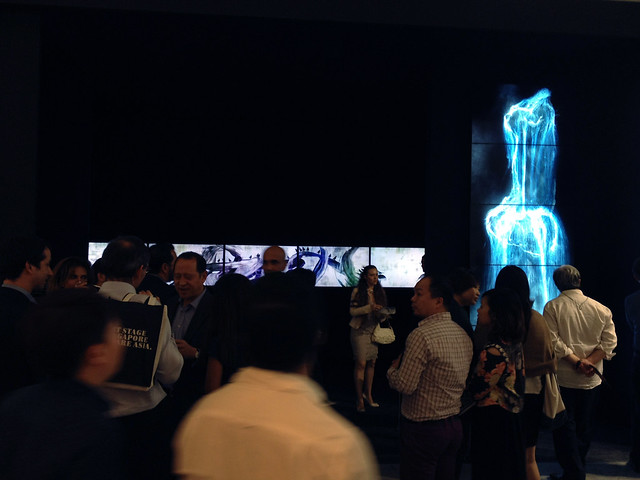 Elsewhere at Art Stage, new work was shown by Milenko Prvacki at iPRECIATION Gallery, and I was lucky enough to catch a book signing by the artist and the editor Charles Merewether, who told visitors of the nature of memory and remembering, documenting, representing and forgetting. 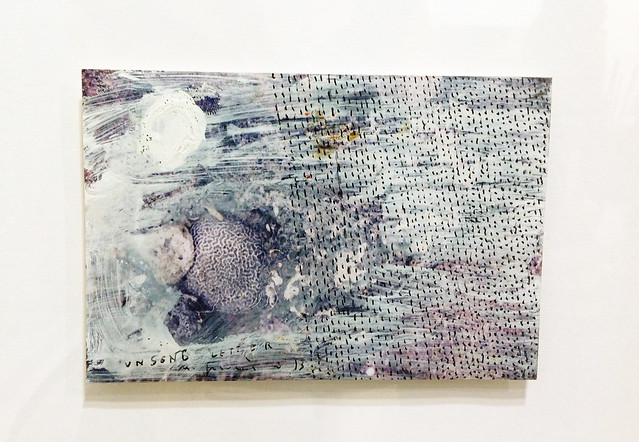 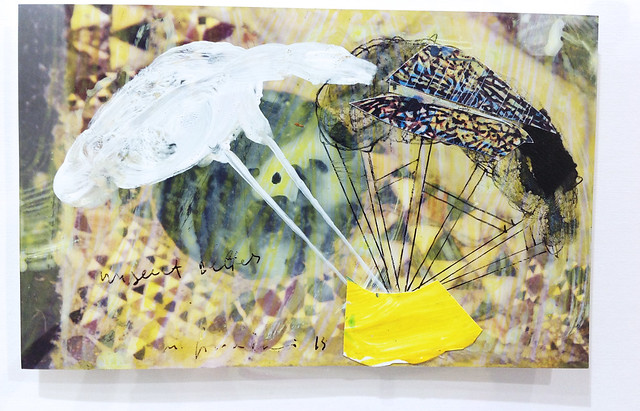 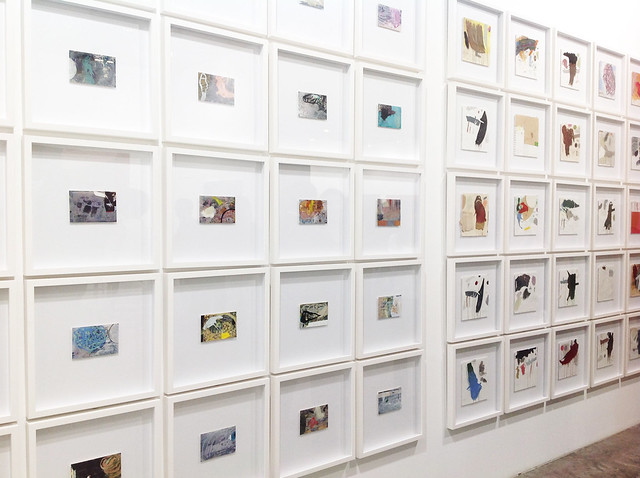 Kristin McIver is an Australian artist, shown at James Makin Gallery, who has appropriated snippets of text from her personal and public social media profiles, conversations and journals to create the installation below. Something about the piece was quite striking, and referenced works by some of the world’s greats (Tracey Emin and her intimate neons, Carl Andre and his offensive pile of bricks). The artist has achieved this in a way that felt to me like she was honouring the body of contemporary art rather than recycling past ideas. I was refreshed by this as I have to admit, there are a lot of ‘re-cycled’ ideas on view at the fair that experienced art viewers will know are not original thoughts or open references. 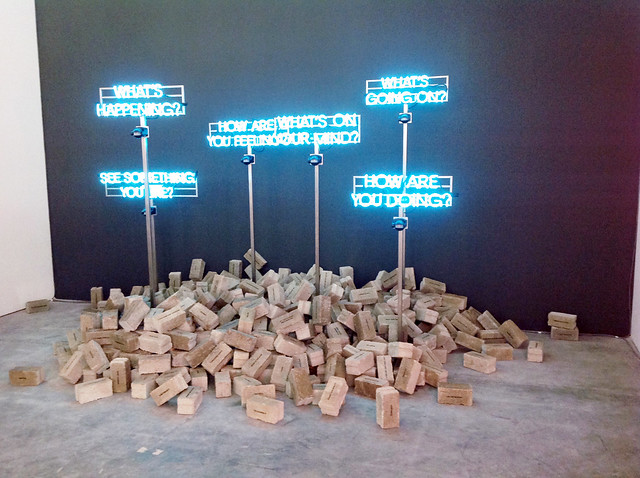 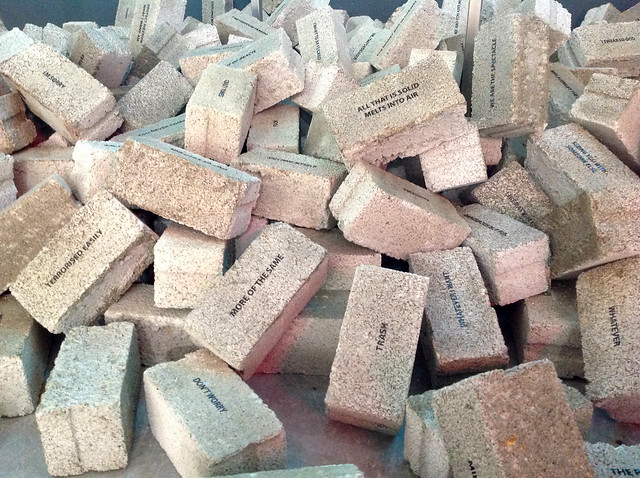 One of my last but favourite gallery stops was Mizuma Gallery, where I was impressed by the knowledgeable team who told me more about Mizuma branching out to include Indonesian and international art alongside their portfolio of established and emerging Japanese artists. Swooping back around to my ‘moth to a flame’ analogy, it seemed fitting that one artwork in particular by Albert Yonathan Setyawan caught my eye at Mizuma – this beautiful installation of delicate, ceramic moths. 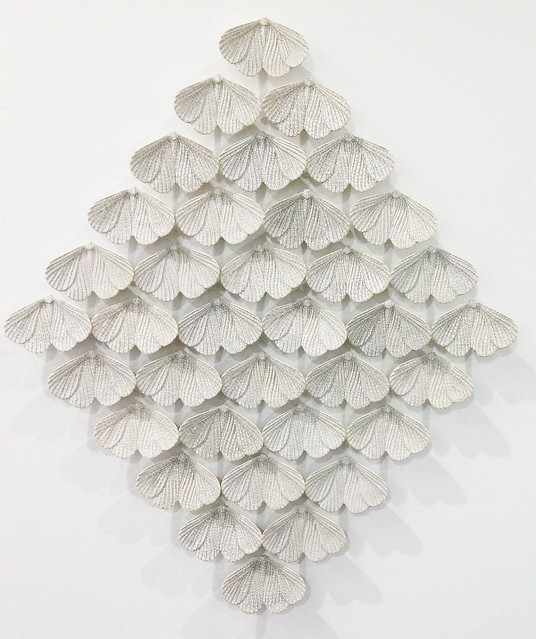 Words and Images by Nicola Anthony

Images courtesy of the artists and galleries