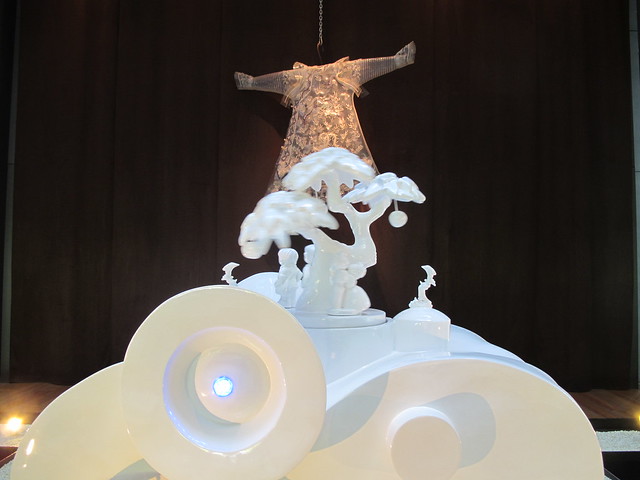 I love the contemporary twist and play on the Chinese language with these then ubiquitous Chinese vehicles now making way for the over 2000 new cars on the road in Beijing every week. Laurens Tan’s current toy-like works have an impartial innocence and sense of play,

which become a voice for his close and constructive observation of China’s cultural drift in the evolution of globalisation. His compelling analysis of language is the basis for his sculptures, installations, industrial design constructions, his 3D animations and digital media. 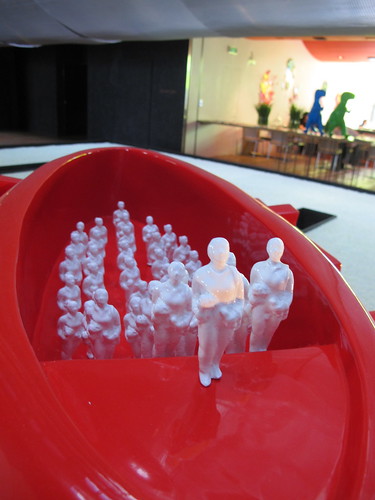 The three life size rickshaws from Red Gate Gallery are on display at The Opposite House atrium are made of fiberglass, steel, plastic and baked enamel. Happy Toy comes with LEDs and a rotating sculpture of a tree bearing fruits with people under it. Alluding to the Chinese Happy Toy, perceived as too garish and in bad taste for the discerning home-maker, their kitsch cheapness gives the toy its fascination and idiosyncrasy. The AA battery operated colourfully–lit toy plays corny Chinglish love songs. Like the rickshaw itself, the Happy Toy may also face extinction to make way for more modern tastes. 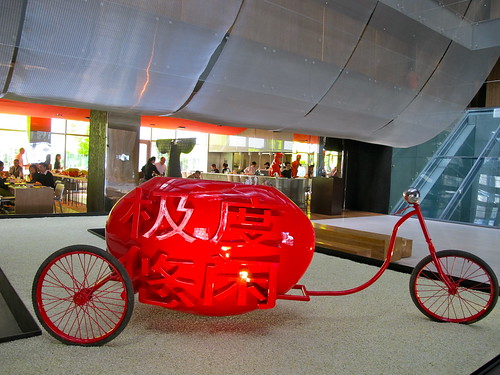 Inspired by a trash collecting rickshaw at Xidan, the white rickshaw bears the Chinese characters of “logic” and “intuition” juxtaposed on each side of the object. LaJi 垃圾 (rubbish) is here phonetically linked to LuoJi 逻辑 (logic) while ZhiJue 直觉 (intuition) is mirrored on the opposite side. The coinage of LuoJi 逻辑 indicates that there is no existing Chinese word for logic.

“Birth” is the title given to the red rickshaw with a carriage home to an army of little figurines. Part of the “Depth of Ease Series” women workers arise from the red ‘egg’ transported on a rickshaw frame. The rickshaw is iconic on Beijing roads as a home-made people carrier, illegal and unsafe, but demonstrates the ingenuity of people’s natural improvisational skills. The Chinese Text: Ji Du You Xian, a close translation of the ‘Depth of Ease’ is a commentary on Chinese contemporary society and a reflection on China’s cultural and economic current trajectory. It’s also an expression of the structural beauty of the Chinese character. 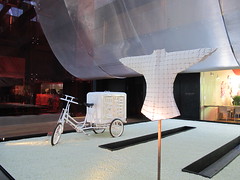 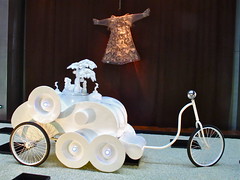 The Holland-born Chinese artist’s studies in Chinese language are constantly interrupted by his inquisitive and interrogative nature – never able to accept meanings and contexts at face value. In search of a blueprint for identity, he uses language to uncover customs, changes in attitudes and values otherwise obscured from view.

Exhibition is open through to December 31 2010

Venue:
The Opposite House
No.11 Sanlitun Road
The Village Building 1
Chaoyang District Beijing