Chinese artist, Feng Lumin’s critically-acclaimed childhood series is featured among an extensive collection of 50 of his oil paintings currently on display at the newly-opened Art Retreat and Wu Guang Zhong Museum (Olivin Gallery) until 31 March.

The eminent late artist Pablo Picasso once said: “It takes a very long time to become young.” Those words could certainly strike a sensitive chord among many a youth robbed by jaded pragmatism, reminding us that perhaps one of our toughest challenges in life may not necessarily be so much about “growing up” as it is about recovering raw innocence and erstwhile idealism.

This is apropos to Feng Lumin’s journey as an artist. Although enamoured by the arts, music, and culture in his youth, he enrolled at Chengdu Polytechnic in 1987 to study nuclear science as per his father’s wishes, and went on to become a successful geological engineer. At age 36, he abandoned his stable career to pursue the precarious life of an artist, entering the Central Academy of Fine Arts in 2000 and specializing in oil painting.

Despite being older and coming in without formal training, Feng impressed contemporaries and superiors alike with his artistic talent and soon began exhibiting in Beijing, Hong Kong, Paris, and now, for the first time, in Singapore. His critically-acclaimed childhood series is featured among an extensive collection of 50 of his oil paintings currently on display at the newly-opened Art Retreat and Wu Guang Zhong Museum (Olivin Gallery) until 31 March 2014. 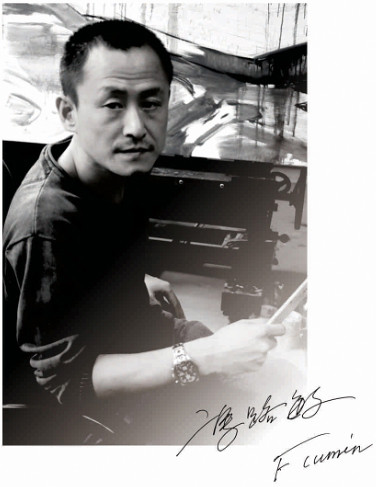 China’s economic miracle was borne out of heavy industrialization beginning in the 1990s. The artist himself was born at Liaoning province in northeast China, located between Beijing and the North Korean border, and one of China’s most important industrial bases, particularly in mining, metal refining, and petroleum and chemical industries. All too often, the posturing façades of progress obscure the unnerving reality of what happens on the ground: the destruction of environmental landscapes, air and water pollution, and harsh labour conditions, oftentimes involving even child labour.

If Feng had at all any intention to comment about these harsh realities, he avoided harping on overtly about the harrowing effects of China’s economic ascent. His childhood series portrays children in the rural areas—riding bicycles, some of them smiling excitedly, others with ghoulish-grey expressions, while some boys display early hints of manly bravado. In a subtle act of volte-face, his oil paintings manage to speak about modernity and progress not by confronting it, but rather by allowing optimism to shine through via the impish smiles of rural children who seem to represent both a shining hope for the future and a yearning for a time long gone. 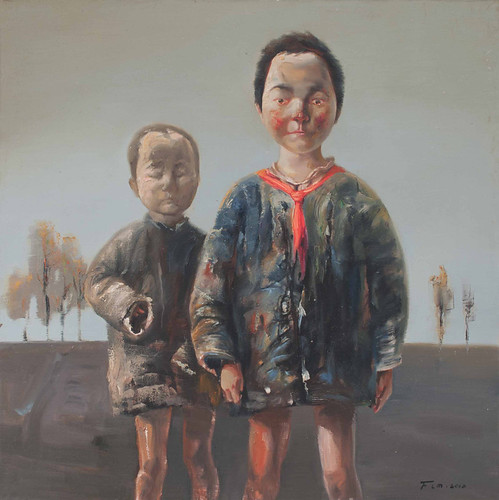 Though reminiscent of nineteenth-century Britain’s reaction to child labour and idealisation of the English countryside vis-à-vis industrialisation, this approach is also characteristic of the artist’s own thematic interest. In 2006, Feng painted a series of coxcomb flowers that he himself planted, harvested, and dried under the sun—all wilted, but depicted in a “fresh burst of sensual stimulus…akin to a soulful performance of jazz music”. 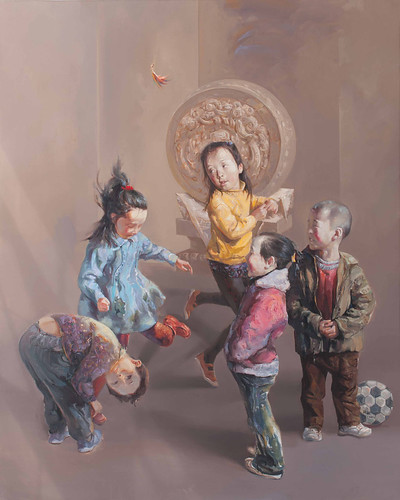 The artist’s penchant for capturing the impermanence of youth and existence is evident in The Autumn Rain is Coming, in which a group of children and a dog are seen posing for the artist. They are smiling against the bleak grey and smoggy backdrop, a lone child looking on behind the rest while another wears a protective screen on her head. Although they have to weather the autumn rains that bring with it the impending gloom and misery of winter, the artist faithfully harvests these children’s smiles and curious countenances and illuminate the promises of a brighter future within them for when the spring rains finally come. 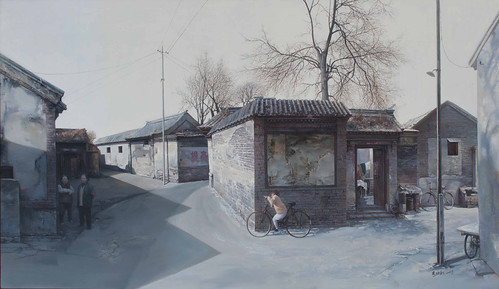 Riya de los Reyes is a freelance writer on contemporary Asian art and culture. She currently works at a publishing house and was an alumni of the Curating Lab Programme (2012).