Ian Davenport: Between the Lines now running at Art Plural Gallery is the British artist’s inaugural solo exhibition in Singapore and features new paintings that the artist has specifically created for this exhibition 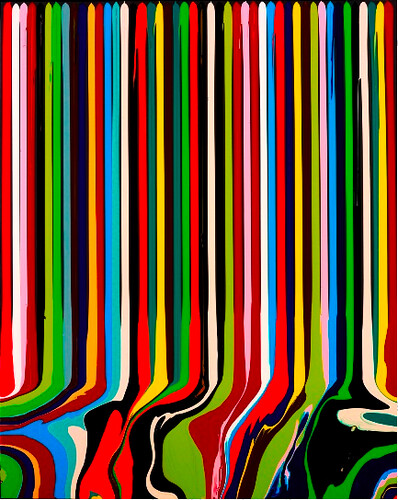 A large part of why I love Ian Davenport’s work is because of his process. This process involves physically manipulating the material qualities of the paint, from pouring it with watering cans, flicking it from little pinheads to blowing strands of it with fans, both large and small. Once, when his studio used to be on a film set, he hired an industrial wind machine and tried to use that. He watched in horror as his studio moved from one end to the other.

Ian Davenport: Between the Lines now running at Art Plural Gallery is the British artist’s inaugural solo exhibition in Singapore and features new paintings that the artist has specifically created for this exhibition. In this series of works, Davenport applies paint with an industrial syringe, which is an incredibly precise instrument for controlling liquid, on to prepared canvases, boards and aluminium panels, tilted so that gravity and the consistency of the paint determine the final composition. The lines of colour flow and pool into saturated puddles at the base of the paintings. The dichotomy between the poised, controlled lines and the resulting ‘puddling’ as Davenport calls it is extremely arresting.

This process has allowed him to concentrate on colour and the sequence of colours rather than focusing all his attention on the paint and how it flows. Many different things inform his choice of colours. Sometimes it is purely intuitive, putting colours together and seeing how they look. At other times he might lift a palette from an old painting; Puddle Painting: Green (After Holbein), 2010 for instance is based on a fixed frame of reference; that of the original painting itself – Hans Holbein the Younger’s The Ambassadors, 1533, which Davenport frequently visits at the National Gallery. He starts by scanning the painting surface, often with the aid of high-resolution computer imagery to select various colours as he moves from left to right across the surface of the painting. The resulting work oozes a familiarity to Holbein simply through the composition of colour with the puddling at the bottom bearing more than a passing resemblance to the anarmorphic skull at the base of Holbein’s original.

In an interview with The Guardian in 2009, Davenport said, “I feel like I have discovered a language that I can now play around with. I never set out to create this style of work though. And that’s the great thing about art – you’re never too sure where you’re going to end up. It really is a personal journey.”

Indeed, a language that I am more than willing to learn.

About Ian Davenport:
Ian Davenport was born in Kent in 1966. He graduated from Goldsmiths College of Art in 1988 and as one of the generation of Young British Artists, he participated in the seminal 1988 exhibition Freeze. In 1991 he was shortlisted for the Turner Prize and since then has exhibited extensively across the world, and undertaken several large-scale site-specific murals, including the 50m long mural under the bridge on Southwark Street, London. In 1999 he was a prizewinner in the John Moores Exhibition. Davenport’s work is held in numerous public collections including the Arts Council Collection in London, the Dallas Museum of Art, the Tate gallery in London, Weltkunst Collection in Zurich and the FNAC Fonds National d’Art contemporain in Paris.

Exhibition Details:
Ian Davenport: Between the Lines
11 May to 7 July 2012