When author Joan Didion lost her husband to a sudden heart attack on December 30, 2003, she turned to writing to alleviate her pain and grief. Her remarkable book, The Year of Magical Thinking, was borne from that cathartic exercise. More unconventionally, musicians Jack White and Karen Elson decided to celebrate their divorce by throwing a party, complete with invitations and dancing and promising “a positive swing bang hum dinger”. Whether it is the passing of a loved one or the end of a (slightly off-kilter) marriage, we deal with loss in many unpredictable ways. Living Rooms, comprising three original plays presented by the ambitious Take Off Productions, examined these varied coping mechanisms. The plays were staged at Play Den at The Arts House on 4 – 5 August. 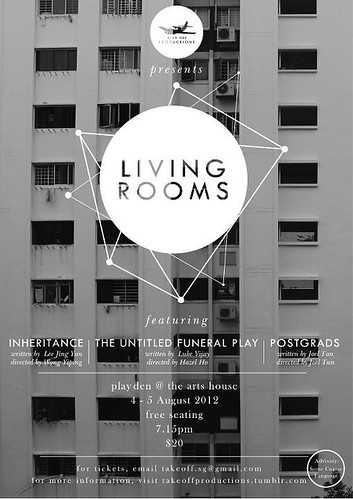 The living room, typically a place of congregation, conversation and recreation in a home, was instead proposed as a disconcerting liminal space. Tension was particularly high in the opening play, Inheritance, about a brother-sister duo, Ben and Eliza, who share twisted childhood memories that have spilled over into their present. The play opened with Ben abruptly re-entering Eliza’s life, his sudden arrival highlighting the transience and impermanence of his place in the family’s abode.

Anonymity prevailed during the play, with the prevalent use of personal pronouns (“he”, “she”, “they”). Murky references to the siblings’ past (“You don’t have to tell me why you did what you did”) also set the audience on a guessing game: What happened? Who did what? Why are Ben and Eliza so unnerved? The siblings walked on eggshells around each other, their interaction stultified, contrived. Playwright Lee Jing Yan, who also played Ben, was jittery, anxious, constantly fidgeting, while Olga Bessarab, Eliza, was ambivalent and clinical in her delivery. Both performances allowed the audience to feel the siblings’ discomfort in their futile efforts to efface their dark past and idealize the present, culminating in Ben’s equally sudden departure. In an attempt to foster an unsettling atmosphere, perhaps too little was revealed, leaving the audience aloof and thwarting their sympathetic response to the siblings’ plight. All we were left with was Eliza’s cryptic admission of depravity: “I am the monster”. 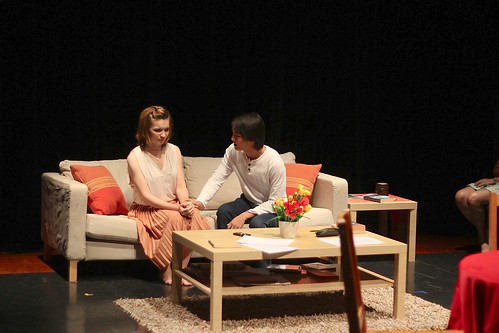 Unresolved troubles lurk in the siblings’ past

The highlight of the production had to be “The Untitled Funeral Play”, centered on a hysterically dysfunctional family and their attempt at funeral preparations for a family member’s passing. Sensitively tackling race and religion and examining the conventional nuclear family structure, this is a play I wish I could watch again and again. Credit has to be given to playwright Luke Vijay and director Hazel Ho for the witty dialogue, orchestration of perfect timing and the comedic play of entrances and exits. 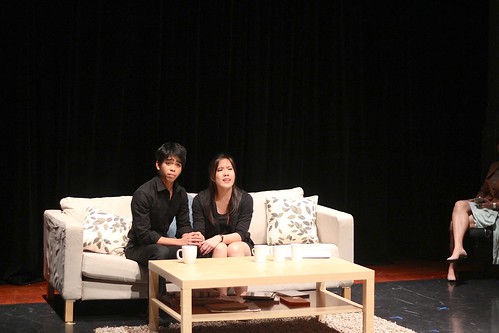 At the start of the play, the grief-stricken couple’s comical attempt to expunge all anguish with a rapid-fire string of eulogies

When Rajan Rajaratnam dies, his son Arthur and his Chinese wife, Emily, decide to give him a proper Christian funeral, and arrange for the Undertaker to come collect the body. While waiting, Karan, Arthur’s uncle, arrives at the family home to convince Arthur that his brother deserves a Hindu funeral. To complicate matters, Emily’s mother, Florence, pays a surprise visit, much to the chagrin of the young couple (and the delight of the audience). Amanda Aw Yong, who played Florence, delivered a stellar performance of the overprotective, smothering mother-in-law, drawing laugh after hysterical laugh from the audience with Florence’s superstitious Buddhist practices. Another crowd favourite was Vinesh Nagrani’s Karan, a brassy man’s man, who turned out to have a lovingly sensitive side as well. That said, every actor played his part well, making this play the star of the evening. 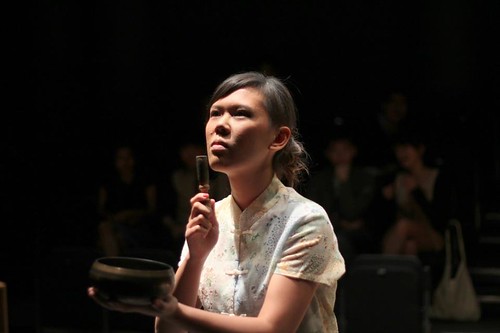 Here, Florence, played by Amanda Aw, is seen performing a ritual to purge the living room of a non-existent spirit

Even though there was a resulting conflation of three religious beliefs under one roof, the play never got too serious or pensive. Humour was cleverly used as a device to allude to deeper concerns like the family’s preoccupation with secular practices – household cleanliness, buffet spreads and funeral fads – and the Undertaker’s emotional incompetency in the face of a human death. Played by Daryl Yam, the creative director of Take Off Productions, the Undertaker was bureaucratic and excessively formal in spite of the gravity of the situation. His insistence on formal salutations, following the “SOP”, and his awkward repetitions of “I’m so sorry for your loss” failed to comfort the family and provide much-needed commiseration. He is “so logical it makes my brain hurt” as Karan irascibly recapitulates. While we all got a good laugh from his antics, these practices are disturbingly common in our locality, where we are so concerned with being efficiently emotionless that we often fail to be sympathetic and understanding.

Like the Rajaratnams, the four obnoxiously erudite PhD students in the final play, “Postgrads”, eventually reconcile their oddities, but not without some uncharacteristic childish banter and harsh words for Hui, who decided to quit the programme and move out, leaving his friends in the lurch.

Resembling a scholarly version of Friends, this play most clearly presents characters that embody our different social responses to loss: the spiteful, immature Kevin, the rational, objective but emotionally pained Ming, and the abrasive, sarcastic Sarah. A special mention should be accorded to Yap Yi Kai, who takes brilliant turns as Emily, the high-strung housewife in “The Untitled Funeral Play” and the nonchalantly vulgar Sarah. On the one hand, being laughably irreverent and on the other, detached, hostile and emotionally challenged, Yap successfully traversed the emotional spectrum and delivered superlative back-to-back performances. 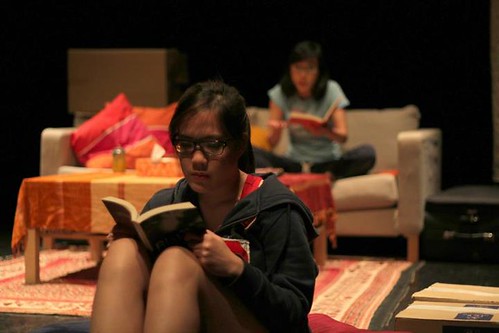 Yap Yi Kai as the belligerent Sarah, in the foreground

In A Thousand Plateaus, Deleuze and Guattari propose “another way of traveling and moving: proceeding from the middle, through the middle, coming and going rather than starting and finishing”, suggesting transience and disruption, and stressing liminality as an intermediate, insecure, ambiguous state, much like the one Hui was in, especially with his reiterations of “I’m stuck”. Grieving the loss of a person, entity or ideal necessarily puts us in that uncomfortable intermediate state. Living Rooms thoughtfully presented empathetic responses we can employ to assuage the pain of loss in such edgy, uneasy periods. The plays were a sagacious reminder that loss is but a transitional state, from which we can grieve, memorialize and move on.

Take Off Productions is a non-profit drama group of Singaporean theatre enthusiasts in their 20s connected by a passion to create independent theatre, with a focus on local themes, issues, and characters that nonetheless strike a universal chord. The production team is committed to independently producing uniquely themed multiple bills, staged once every two years. Each multiple bill production will feature original plays written by emerging local playwrights, starring new and promising local talent. Please visit takeoffproductions.tumblr.com for more information.

Currently, the team at Take Off Productions is extending an open call to youths interested in working in any aspects of theatre (whether artistic or technical) in an independent amateur theatre production. Please e-mail [email protected] if you are interested. The team is also keen to hear about other youth-led theatre initiatives as they are happy to support in whatever way they can.

Editor’s note: All photos courtesy of Choy Siew Fong and Take Off Productions