They make quite a pair Mr Brown and Mr Curator.  Mr Brown is none other than Singapore’s very own social commenter and blogger; Mr Curator is Low Sze Wee, the National Gallery’s curator of ‘Artist and Empire’ which is a temporary exhibition ending 26 March, 2017.

I’ve never met Mr Brown personally nor had heard of him until recently.  However, through Singaporean friends, I’ve come to know Mr Brown after watching recommended YouTube videos of his skits.  He has a blog “documenting the dysfunctional side of Singapore life since 1997”.  The man is Funny!  I roared with laughter at his quips and his grammatically correct English sentences infused with smatterings of Singlish adding a very Singaporean flavour to his voice.

The tour began with Mr Brown acknowledging that he is a side-kick to Mr Curator and bashfully admitting that he had to do a lot of homework before putting on his museum guide hat.  He loves art and he is a self-professed ‘gallery junkie’ which is helpful in terms of talking about the artworks he likes.  The tour takes the audience through 15 key highlights in the exhibition with narratives provided by both Mr Brown and Mr Low.

The National Gallery’s collaboration with Mr Brown is an attempt by the art institution to engage artfully with the public through humour and storytelling.  In theatre, humour is a device that makes sensitive issues more palatable.  It cannot be denied that a topic like colonialism and its effects touches the raw nerves of people who are still reeling from memories of colonisation and instigates shame amongst the younger generations whose ancestors have been the victors of Empire.

’Artist and Empire: (En)countering Colonial Legacies’, with artworks loaned from Britain, Australia, India, Myanmar and Singapore, is a mirror to Tate Britain’s 2015 ‘Artist and Empire: Facing Britain’s Imperial Past’ but refracted to tell stories about Empire through Singapore’s lens.  The Tate exhibition met with some acerbic comments from art critics in England.  Mark Hudson of The Telegraph entitled his review of the Tate exhibition with the tagline “just not good enough”; Laura Cumming of The Guardian calls it ‘illustrations minus the narrative’.  By staging this exhibition, the NGS being a newly minted art institution, barely two years old since its inception, takes the lead by bringing a controversial exhibition to the shores of Southeast Asia.

It must be said that Singapore’s curation of the exhibition has been thoughtful about a sensitive issue.  How could it not be?  Singapore was, after all, part of Empire and many citizens in their golden years can still testify to having been a part of it.  Throughout the tour, there was a marked attempt to critique colonialism via the artworks.  I gather that this was not the curatorial intention but being critical of colonisation is the privilege of post-colonial citizens.  Besides, making fun of certain British habits like ‘the swag’ of Sir Frank Swattenham’s pose does bring on laughter.

Inviting a personality like Mr Brown who openly critiques Singapore in his blog is a political undertaking by the NGS, although it was not with this intention in mind that this collaboration has taken place.  This is an exercise to invite the local public into an art institution housed in two historical monuments for a fun-filled and easy-to-understand tour of its temporary exhibition which will end soon.  But when discussing colonisation and imperialism, the politics cannot be omitted.  How this topic is broached requires careful orchestration and insightful deliverance.  Take ‘General Gordon’s Last Stand’, by George William Joy, for example, where Mr Curator explained how this painting was used to glorify Empire.  This is an art historical fact; a political statement by an artist of Empire.  Low shared his profound knowledge in a matter of fact way which was both academically critical but engaging without intimidating his audience.  Historically, the event of Gordon’s massacre was really nothing to be boastful about.  The amok and rowdy soldiers who murdered the General was pointed out by Low who painted a picture of how the English viewed the Other: hostile, unruly and rowdy.  These Sudanese soldiers were painted piled up one on top of another in a frenzied endeavour to murder Gordon who remains proud and strong even at the hour of death.  Mr Brown performed The Last Stand by mimicking Gordon’s stance which left the audience in fits of giggles. 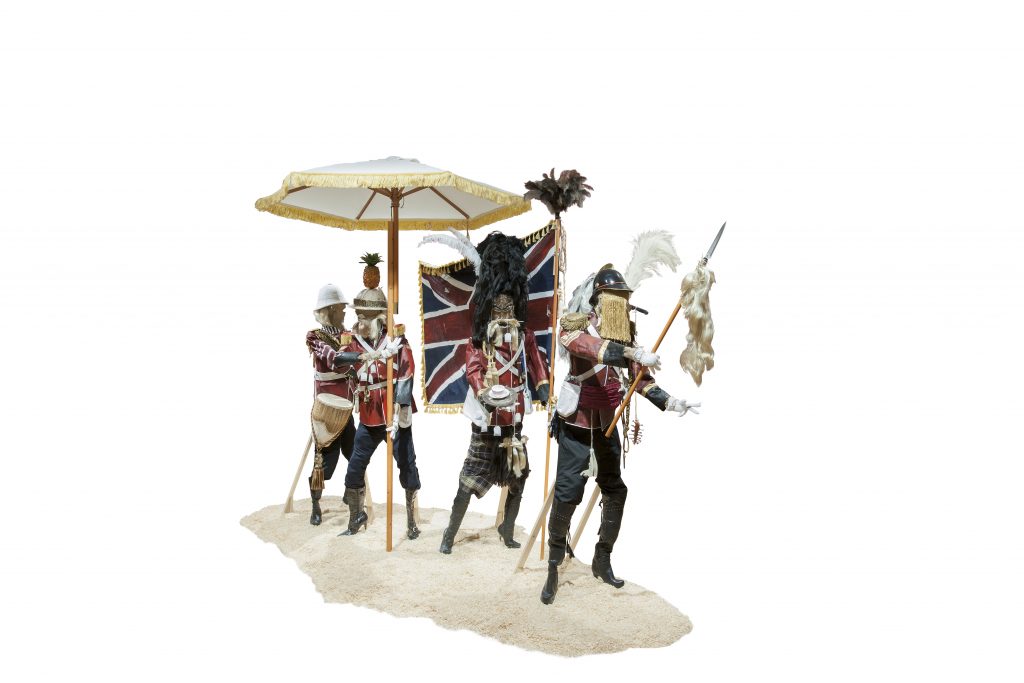 A little boy in the audience asked “Why does the mannequin have a knife in the face?”  This was in reference to Andrew Gilbert’s work which is just across Joy’s portrait of Gordon.  Indeed, this bizarre installation does feature a life size mannequin with a knife protruding from its face.  Mr Brown was stumped by this question.  His facial expression suggested that he wasn’t expecting this but his equilibrium in answering the curious child indicated a desire to engage with the public and to find humour in a most surreal art work.  In this way, the NGS has found an engaging balance between contemporary art works, which can sometimes be intimidating, and its public.  Mr Brown’s respond was also very candid which led to further conversations amongst the audience of how the parade of soldiers in Gilbert’s installation wore high-heeled boots, an attempt by the artist at emasculating the British military, which brought laughter amongst its viewers.  Low added that this piece of work asks its viewers to question what would’ve happened if African Zulus had colonised England instead and brought back booty made up of English everyday objects for display in African museums and homes.  What if, indeed?

It must have been a challenging exhibition to curate, I would think, given such public rancour in England when the Tate Britain staged theirs.  However, the Singapore version does justice to perceptions of Empire; it is with this in mind that the exhibition was curated.  It uses artworks to open up dialogues with the past and the present; yellow lines mark contemporary artworks that are juxtaposed with pieces from the past; this curatorial line of thought reflects Singapore’s self-image because it is very clear that nuances of the past co-exist with the contemporary in the Little Red Dot.  For example, the exhibition opens with a portrait of Sir Thomas Bingley Raffles by George Francis Joseph.  This is a portrait of Raffles in Java before he founded Singapore.  Mr Brown pointed out that Raffles had a middle name – Bingley.  In true Singaporean style, Mr Brown was immediately on friendly terms with the sitter, calling him “Bings”.  This opening comical line set the pace and tone of the tour: fun but serious too.  Low then pointed out the display on the adjacent wall.  Visitors are shown a blown up photograph of Lee Wen’s erected platform where Raffles’ statue can be approached eye to eye.  In this staging, the public is given a platform to engage directly with Raffles; for the first time, the powerful and the subject are locked in a face to face, eye to eye confrontation: the contemporary meeting the past in its face.  Lee Wen subverted the notion of putting the colonial authority on a pedestal which was the function of portraiture in the 19th century.  Mr Brown points out Raffles’ foot hovering over a map of the British Empire.  This little snippet of information is precious because from the position of the viewer who has to look up at this statue, this aspect is completely obviated: we would never see this.

Portraits take up a considerable chunk of the exhibits.  Portraits were status symbols used by victors to announce their success.  The portrait of Tan Jiak Kim, a renowned Peranakan community leader in the 20th century stands authoritatively on its own.  The purpose of this highlight was to show how portraiture was adopted and adapted in the colonies to reflect the status of a community of people who were subjects yet not subjected to the tyranny of Empire.  Mr Brown offers up a personal historical tidbit: he’s a quarter Peranakan.

Mr Brown lent a comical quality to a rather touchy subject: Empire.  As Low Sze Wee explained, the Singapore version of this exhibition is not about glorifying Empire but about showing works of art that were produced during Empire through the lens of Singapore.  It is about opening dialogues with the public through specific pieces of artworks carefully curated to engage Singaporean audiences on the type of art produced by colonial painters, how certain artists responded to Empire through art, and to showcase artists who painted on the cusp of Empire and their nations’ independence. I was glad to know Mr Brown and I liked similar pieces of art.  His absolute favourite is ‘The Secret of England’s Greatness ’ on loan from the National Portrait Gallery in London.  Mr Brown was knowledgable enough to know that the event depicted in the portrait never happened.  Instead, he told the audience that he liked how the artist used vibrant colours, and played with light and shadows to make the protagonists realistic.  An elegantly dressed figure tucked behind the Queen was pointed out by Low to be the Queen’s dresser; she is an aristocrat.  Mr Brown added a bemused quip suggesting that the Queen can only have an aristocrat dress her and none other.

It was refreshing to see a member of the public engage with art from Britain’s past in the passionate manner shown by Mr Brown.  It was especially heartwarming to see a local celebrity who professes in his blog to be a voice of dissent adopt a respectful tone yet remain critical about certain pieces of art on the tour.  Mr Brown had indeed done his homework; the pairing of the curator and the comedian worked successfully for the National Gallery.  I had a thoroughly fun-filled guided tour of ‘Artist and Empire’.

Mr Brown’s tour is back by popular demand on March 11, 2017.  Do check the National Gallery website to see how you can get complimentary tickets to a guided tour.

Eva Wang Nava is a British Art Historian based in a nation-state not far from the Equator. She holds an M.A. in Art History from The Open University and writes about modern and contemporary Southeast Asian art because she feels that the region she calls home has plenty of good quality art to offer the world. When not writing about art, she writes Flash Fiction, using visual art as prompts to get her writing juices flowing. She also teaches a creative writing course using the examination of artworks as prompts for writing original pieces. Through dialogues with each other and writing exercises, participants explore the different ways of creative writing and experience works of art through a personal, social and cultural lens. Find her work at CarpeArte Journal.