An exciting week lies ahead for art enthusiasts and history lovers as the National Gallery opens today. Holding a record-breaking collection of Southeast Asian art in a single space, the UOB Southeast Asia Gallery discusses the region’s artistic development from 19th century onwards while the DBS Singapore Gallery provides a deep and comprehensive overview of Singaporean art from the 19th century to the present day.

With this much art, there is always something that requires just that extra hour of browsing. Here are some of the highlights from each gallery to add to your list. Oh and we definitely recommend setting aside one full day for the visit! Raden Saleh’s Forest Fire demands your attention the minute you step into Southeast Asia’s first gallery. At three metres, the painting easily dwarfs everything else in the room. The immediate appeal however is in the dramatic storytelling of a tragic forest fire. Here you see depictions of animals, both predator and prey, perhaps indicative of a play on the strata of society; forcibly edged out on a cliff and scrambling on top of one another or up in the sky, to get to safety.

Raden’s works are indicative of his Western art training with a likeness to romanticism in the Dutch Golden Age. Considered Indonesia’s pioneer modern artist, the popularity of his works travelled to Europe. Although he created naturalistic scenes of his home country, Raden was not necessarily tuned in to creating Indonesian art, instead his themes were more indicative of a nationalistic awakening. There are more works by Raden Saleh in the Southeast Asia gallery painted in the same likeness: see if you can spot them.

One cannot help but be tickled by the cheeky, idyllic interpretation of rural life in this painting by Chuah Thean Teng. The first modern artist in Malaya to use wax-dyeing batik techniques, Chuah was motivated to experiment and make art with Batik after a failed business. His skilful wax-dyeing technique is evident in this painting, showing clean lines and sharp colours purposefully inked into different sections. Having had sold-out exhibitions, his success inspires many younger artists in both Singapore and Malaysia to create with Batik art.

Lengkung Dinamika (Dynamic Curve) consists of two totem-like poles placed in confrontation with each other. At first glance, the totem resembles a tribal artefact but upon closer look, it is not as much a religious-spiritual artefact but rather an exploration of form and colour. Painting the mahogany wood with vibrant colours, Sidharta adds a dynamic element to an otherwise static sculpture.

Sidharta is now well-respected and known but at a time when sculptors rarely gave a heavy treatment and vibrant colours to sculptures – Sidharta was criticised by many. This work symbolises the spirit of the artist in which he constantly pushed the boundaries of his experimentation and incorporated fresh ideas into traditions and cultural legacies.

An auction room favourite, Popo Iskandar is usually known for his highly collectible Kuching (cat) paintings. The Two Cubist Nudes then provides a rare look into his cubist works. Popo is known to make the subject fundamental, but perhaps different than traditional figurative painters, Popo further develops other visual elements and treatments such as the texture and explores movement and psychological undertones. A modernist and some may say purist, Popo is always an interesting artist to study because of his interpretation of an element in the imaginary space.

Both fighters look to be still on guard and their tattered clothes suggests that they are fresh from battle in this Hendra painting. The two fighters seem to look into the distance, as if on guard for the next wave of attacks. Hendra Gunawan is respected as an artist as well as a nationalistic hero. During Indonesia’s War of Independence against the Dutch, Hendra joined Pelukis Front (Frontline Painters). He brought back numerous sketches from the battlefield and produced posters of the nationalist struggle. The illustrations and paintings helped spread the word about the cruelty of war and catapulted the important role of artists during wartime. 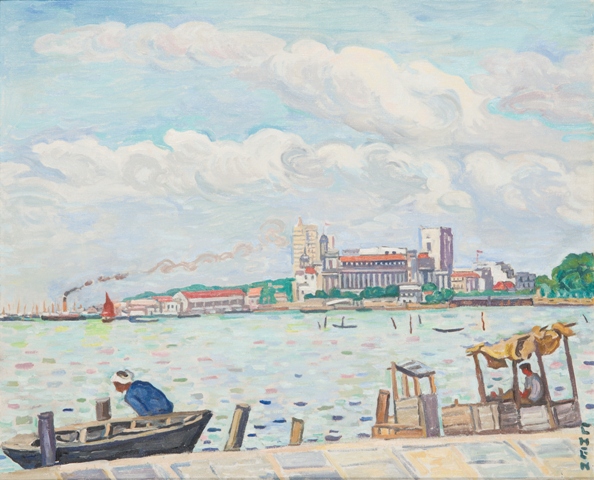 Part of the group of artists that established the ‘Nanyang School’ Chen’s contribution to the Singapore Art landscape saw her receiving a Cultural Medallion in 1982. Her frequent travels out of Singapore to various art capitals around the world also afforded her a more international outlook while still being rooted in her cultural and ethnic background.

Cheong Soo Pieng’s innate ability to translate onto ink the simplicity of daily life is apparent in his painting Drying Salted Fish. Visually capturing the bargaining and chatter of a market scene, the painting, produced in 1978, harkens back to a time before HDB flats when the kampong spirit was still alive and well. It is not surprising then that this nationalistic image was selected to be on the Singapore $50 note.

Receiving critical acclaim from both international and local art critics alike, Eng Tow’s career as an artist stems from her fascination with the different textures of tapestry art. Her research into special art, specifically in the area of washi or Japanese paper also earned her international recognition. Bowls, a series of sculptural painting, produced in 1979, demonstrates a deep understanding of shapes, forms and depth. It also reveals her intimate relationship with her medium, masterfully weaving cloth and thread into an exploration of her artistic capabilities, with her materials as her travelling companion.

Admission into the Gallery building by tickets only. Tickets can be booked online from 5 Nov, 10am onwards till 6 Dec, 5pm through https://tickets.nationalgallery.sg

Sharifah Shahirah is a dreamer, art lover, and quote collector. Her favourite quote is” We write to taste life twice, in the moment and in retrospect” Anais Nin.