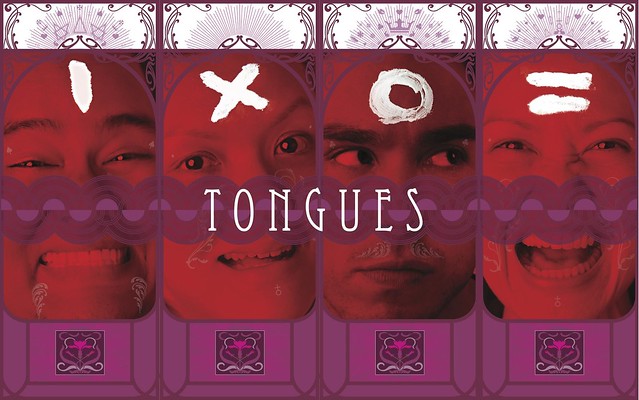 This year’s M1 Singapore Fringe Festival deals with the relationship between art and faith, a subject that is as sprawling as it is complex. Throw sexuality into the mix, and you get “Tongues”, a thematically ambitious new play by Sean Tobin and Jason Wee. The National Museum Gallery Theatre was a particularly fitting venue for the presentation; the interactive nature of the performance (either between the performers and the audience, or with God) was well-served by the lack of any physical barrier or distance between the stage and audience seating, and its bare-brick walls and exposed set complemented what was an emotionally naked performance.

The script – which was a result of surveys, interviews, focus groups – was brought to life in a deft and sure-footed manner with dynamically paced direction. What could have resulted a string of disparate segments was instead transformed into a seamless and dazzling circus act which juggled vignettes that were culturally specific, together with more cosmic questions about existence and humanity. In one sitting, I found myself laughing at parodies of easily recognizable characters (which never crossed the border into caricature), yet also haunted by the more surreal scenes that bookended the play, reminiscent of the best of Sartre or the Twilight Zone.

And while Tongues was no doubt entertaining, it was not exactly an easy performance. It required the complete presence of the actors and constant engagement by the audience. This was aided by Dirk Stromberg’s eerie sound design that forced one to listen actively throughout the show to the dissonant reverberations in the actors’ speech that gradually transitioned from a disturbing metallic tone to a more primal presence.

The unobtrusively spooky soundtrack provided an unsettling backdrop for the taut and nuanced performances by Nora Samosir, Serena Ho, Walter Hanna, Faizal Abdullah. The quartet’s chemistry was evident, and their sensitive and precise delivery was never too polished to lose its raw honesty. Their physicality and unwavering energy were put to good use in tackling a subject matter that’s essentially grounded in the body, as well as juxtaposing the private nature of personal faith with the public collective displays of religious ritual. Through a wide array of characters, the actors inhabited a special kind of cold and alien purgatory reserved for the twisted and the lost in search of meaning… but it was a hell of a lot of fun for the audience.

Editor’s Note: In spite of his legal training, Yen has chosen to pursue a career in the visual arts. Apart from being a closet-painter, Yen Phang is largely still an unknown quantity. Forever random, but always polite.