Standing in the midst of the work that covers all available floor and wall space, combined with the added effect of the reflection from the glass windows at night, one is transported into a colourful, hypnotic floral wonderland in Moment and Eternity.

Through his translator, Ohmaki explained the concept behind his installation, the latest in a series started in 2002: Traditional houses in his hometown were being demolished and he felt he was losing his home, its culture. In response, he wanted to create a space that he could go home to.

Ohmaki’s work deals with a universal issue: The loss of traditions and culture. 80 patterns of flowers are utilised. Flower patterns are found in virtually every culture and Ohmaki has brought them together in this installation, as Singapore is a country he considers to be a confluence of East and West; a melting pot of multi-culturalism. His aim is to create a space where upon entering; the visitor is given an opportunity to think about where they come from.

The mesmerising composition consists of brilliant, coloured pigments applied directly to white felt, using a stencil technique. Visitors are invited to wander across the work: the significance being their involvement in the transformation of the work. This integral element of audience participation is intended to provoke the visitor into contemplating how their conscious decision to step on these felt tiles has changed the work: How their ‘footprint’ affects the environment, to acknowledge what they are doing at this moment in time and how what they do has repercussions. The metamorphosis of the work on the floor is juxtaposed by a fixed wall mural illustrating the chromatic flora pattern in its original state. 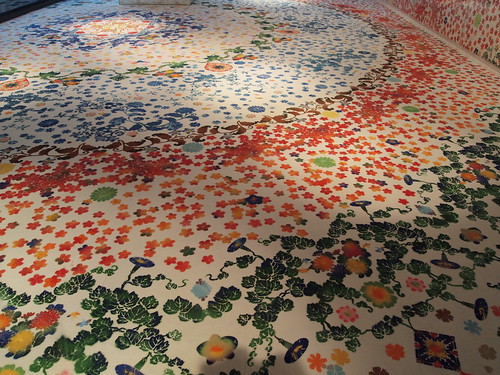 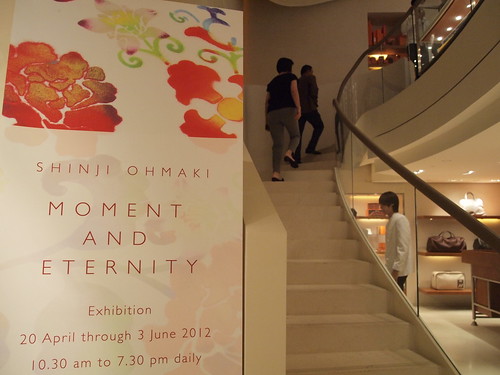 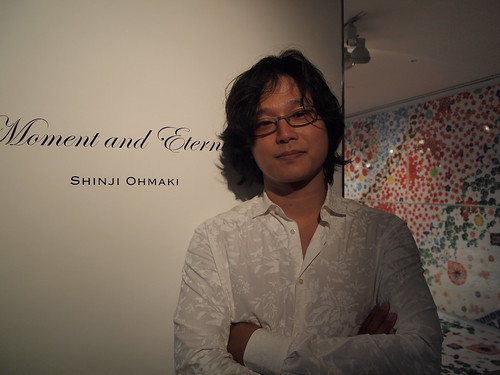 Standing in the midst of the work that covers all available floor and wall space, combined with the added effect of the reflection from the glass windows at night, one is transported into a colourful, hypnotic floral wonderland. Ohmaki wants us to contemplate being in the moment, with his repetitive circular motifs representing the eternal cycle of life. With Moment and Eternity Ohmaki offers us an evocative installation that is not only beautiful, but also profound.

Born in Japan in 1971, Shinji Ohmaki has an M.A and B.A in Sculpture from the Tokyo National University of Fine Arts and Music. Today, he works in situ, creating artworks connected to their environment – installations often based on the intervention of the public, who are invited to experience his creations in direct relation to their own movement through space.

Moment and Eternity is the tenth successive installation by Third Floor’s Programme Director Emi Eu who is also the Director of the Singapore Tyler Print Institute and runs from now till 3 June 2012.

Created in April 2008, the Fondation d’entreprise Hermès reflects Hermès’s determination to consolidate and extend its policy of committed philanthropic support. The Fondation d’entreprise Hermès encourages new talent and supports emerging forms of artistic expression. Reflecting the artistic roots of the house of Hermès, support for the production of new works of art is a central concern. True to the house’s culture of artisanship, the Foundation focuses on direct funding for creative artists, for the realisation of their works.