“Archiving Cane”, an installation comprises documentation of Loo’s live performance of “Brother Cane”, performed in 1990s by Josef Ng, will be performed by Loo at The Substation, from 7th – 16th December. – Yen Phang reports

Most people would probably not have seen “Brother Cane” in person, either in its original iteration by Josef Ng in 1993, or Loo Zihan’s reenactment in February this year at the Substation. (Loo had also performed “Cane” a year before, in March 19 2011 at Defribillator in Chicago). 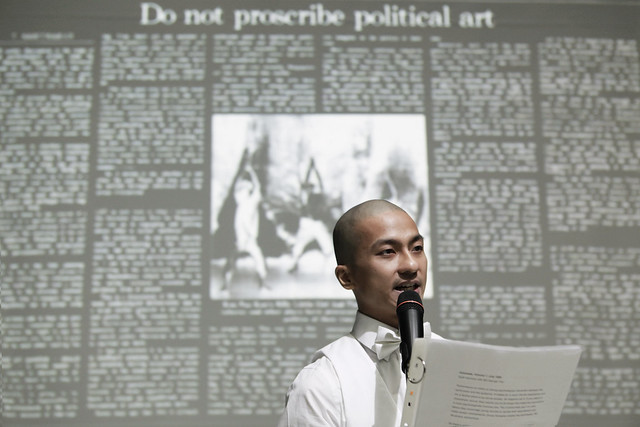 For those of us who have not witnessed “Brother Cane” firsthand (and who form the majority), our knowledge and views of the performance will necessarily be shaped by its portrayal in the media. 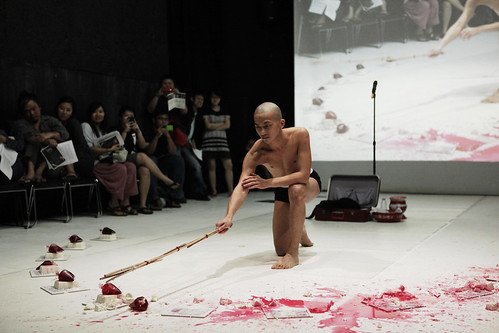 However, Loo’s process of archival goes well beyond mere reperformance-as-legacy in the vein of Marina Abramovic… Loo’s exercise is more self-reflexive, extending beyond “Brother Cane” itself and touching on broader questions about how we define and shape our collective memories as Singaporeans.

The idea of archival objectivity or archival neutrality is a well-known myth. Archivists (such as Loo, though not in the technical sense of the term), like journalists (such as those who covered the “Brother Cane” ‘scandal’ in the 90’s), have their own biases and agendas whether conscious or not. The archive is not a passive resource to be used and exploited for other purposes. There is power that is yielded in the archival process… through this process, the past is controlled, and some narratives are inevitably privileged over others. Loo as an archivist plays the central role as story-teller of an important part of the history and politics of Singapore’s arts scene.

“Archiving Cane” raises questions about our collective local identity, not just as an arts community, but also as a nation: What issues matter to us? How are we addressing these social concerns and questions publicly? What discourse do we want to engender?

Probably the most alluring aspect of “Archiving Cane” its interactive format, where visitors to the exhibition are invited to provide their own account of “Brother Cane”. This not only mitigates any unspoken prejudices (either by news reporters or the archivist Loo himself) in the reporting and archival process, but also encourages a critical questioning of long accepted conventions of cultural preservation and description in Singapore.

In this sense, “Archiving Cane” is not only a thoroughly engaging exhibition, but potentially also a culturally significant one in Singapore’s recent art history.

“Archiving Cane” by Loo Zihan runs from 7th to 16th December at The Substation, 45 Armenian Street. Opening hours are 12pm to 9pm daily. Admission is free

(Please be advised that this exhibition contains material that is rated R21.)

The Substation is a not-for-profit arts venue and independent contemporary arts centre, committed to nurturing ‘local voices’ in Singapore arts and culture, and supporting diversity and depth in the arts.

The artist is also seeking donations for the cost of his performance at The Substation. As the artist’s application for the National Arts Council Presentation and Promotion Grant was unsuccessful, the artist would like to seek the public’s support. Details of the list of costs and donations can be made at KICKSTARTER. Donation closes on the 16th December 2012.