The winner of the ICON de Martell Cordon Bleu 2011 surprised many as Sean Lee, 26 years old is the youngest chap and the dark horse among all the contestants.

Last Friday night, the Artitute team had the honor to witness the revelation of the winner of the prestigious ICON de Martell Cordon Bleu 2011. At the spacious art gallery at the [email protected], the atmosphere was buzzing with anticipations, excitements and a dash of Martell Cordon Bleu cognac from both the guests and the finalists. 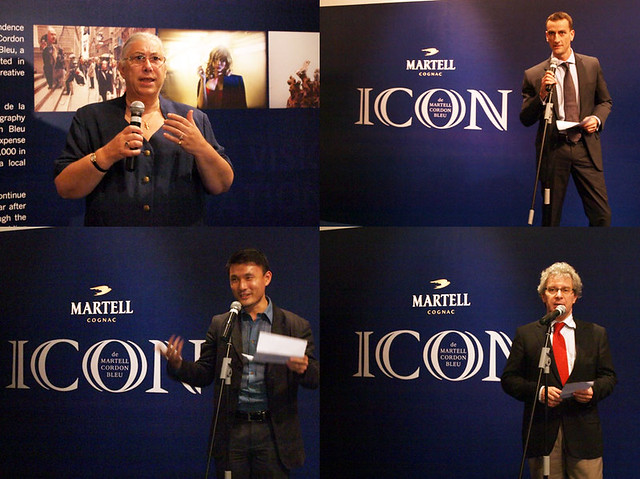 All the finalists except Robert Zhao were at the event, he was away hence we didn’t get to see him. But I spot John Clang and was as excited as a little girl when I saw him. This man is our country’s pride for putting Singapore into the international scene for fine art photography, hence it was an honor to have finally met John Clang in person. Unfortunately we didn’t get a chance to speak to him much as he was super busy with his friends and fans who were also eager to speak to him. I hope to catch up with him when he next pop back into Singapore as he’s currently working and residing in New York.

The Guest-of-honor for the night was Mr Baey Yam Keng, Member of Parliament and longstanding supporter of the arts, and welcomed notable members of local and international arts scene. It was refreshing to see a younger Member of Parliament gracing an art event with their presence.

Finally the annoucement was made. We were surprised and delighted to learn that Sean Lee was the winner of the prestigious ICON de Martell Cordon Bleu 2011. He was indeed the surprised winner as he was the dark horse among all the contestants. Only 26 years old, Sean is the youngest of the eight nominated photographers this year. In my previous interview with Sean, I wrote about his works being his expressions of his personal thoughts and emotions, of himself, his family and his friends, captured at the purest form. And in the age of technology, Sean’s works bring back the true and original nature of photography as most of his works are raw and untouched.

Sean Lee, winner of the Icon de Martell Cordon Bleu Photographif Award 2011, is over the moon.

“Winning this award is extremely meaningful to me especially since it is one that was judged by an international panel made up of highly established and renowned individuals from the photography and arts scene,” said Sean Lee, winner of ICON de Martell Cordon Bleu 2011. “Photography in Singapore is still at its infancy stage and it will require a lot of continued support from corporate and government organisations to elevate this art form into a level worthy of international standing. ICON de Martell Cordon Bleu is a great example of corporate organisations being able to make a difference to Singapore’s photography community. I look forward to seeing more of such initiatives that will help bring this art form to a regional and global stage.”

I am sure that Sean Lee’s mentor, Sherman Ong, who was his nominator for the award would have been very proud of him. Unfortunately Sherman wasn’t there to withness the crowning as he too was away. Coincidentally, Sherman Ong was also the winner of the ICON de Martell Cordon Bleu 2010. The winning streak have obviously been passed on from mentor to his student.

Sean Lee walked away with the winner’s trophy and S$30,000 cash. Asked what will he do with the prize money, the family loving young man said he will give some to his parents and the rest will be use to repair some of his camera equipments. The other two finalists did not go home empty handed, they too walked away with a trophy and S$8,000 cash.

The night ended on a high note, and I am sure many people were pleased with the generous free flow of cognac from Martell. As we had to leave before the evening officially ends, I sent Sean Lee another congratulatory SMS and a note to catch up with him on another day. His reply: “Thanks so much! I’m over the moon!!”. Congrats again Sean and see you when you’re back from your trip.

To view the works of John Clang, Sean Lee and Zhao Renhui, please visit the ICON de Martell Cordon Bleu 2011 Photography Exhibition between 2 and 25 July 2011 at the Helutrans Artspace Gallery 3 in Tanjong Pagar Distripark. The gallery will be open Monday to Friday, 11:00am to 7:00pm, and on Saturdays from 11:00am to 5:00pm.