Passages//Toroq features two series of works that function in tandem with each other, complementing and underscoring topical issues that have arisen from the Arab Springs.

Sherin Guirguis has mined themes of politics, culture, identity, societal mores and feminism within a post-colonial Egyptian context for her first solo show in the Middle East region at The Third Line in Dubai. Utilising her perspective as part of an Egyptian diaspora, Guirguis explores the ensuing tensions when traditions are confronted by the challenges of a contemporary world.

Passages//Toroq features two series of works that function in tandem with each other, complementing and underscoring topical issues that have arisen from the Arab Springs. Toroq or social passageways are shaped through circumstances brought on by change, be they violent or peaceable acts. Guirguis utilises literary and historical references to conjure up stunning pieces of art that invoke conversation and reflection. Her scholarly study of important works of Egyptian literature, music, poetry, design and architecture of the past probes and analyses the social dialogues that have grown out of conflicting cultural identities experienced by an Arab diaspora of today.

The first series is inspired by Nobel Laureate Naguib Mahfouz’s Cairo Trilogy, a work of fiction which documents life alongside the background of Egypt’s 1919 revolt against the British occupation. It touches on current concerns such as the role of women in society, moderate versus fundamentalist Islam, democracy, and military repression. The shapes of Guirguis’s three large-sized sculptures are derived from traditional Bedouin jewellery and are fashioned from material akin to that of harem mashrabiyas; carved wooden latticework screens that shield interiors from outside prying eyes. Two of the pieces move upon interaction with the viewer. Guirguis demonstrates this by pushing Qasr El-Shoaq (2010): It rocks rhythmically, slowly and deliberately to its side on two curved axes, it tilts over precariously but just when you think it is about to topple, it shifts and swings back in the opposite direction. It is seductive and provocative while Bein El-Qasrein (2010) on the other hand, rocks unpredictably at the slightest touch much like a manic roly-poly toy. I have to step quickly to the side like a prize fighter to avoid getting clouted on the head. Finally, El Sokareya (2012) which Guirguis explains is a progression from the two prior works: A deconstructed reconstruction, it is unmoving, exuding a prickly, touch-me-not quality with its pointed projections. Via these sculptures, each bearing the weight of their attributes derived from established socio-cultural institutions, Guirguis seeks to redefine the archetype of Arab femininity and the dualities inherent in all aspects of our experiences. 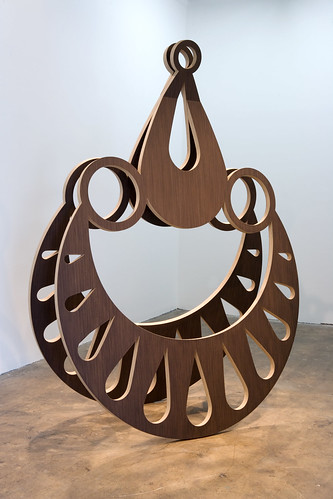 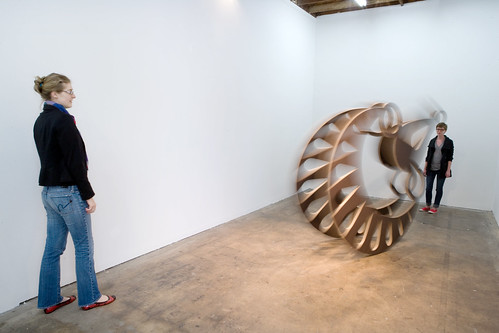 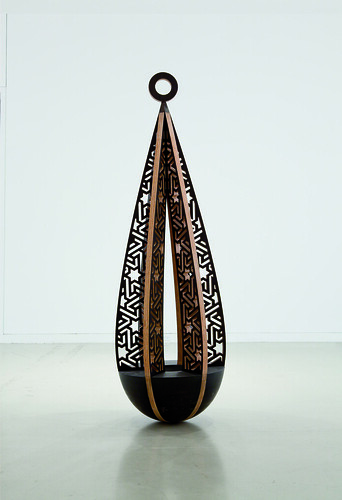 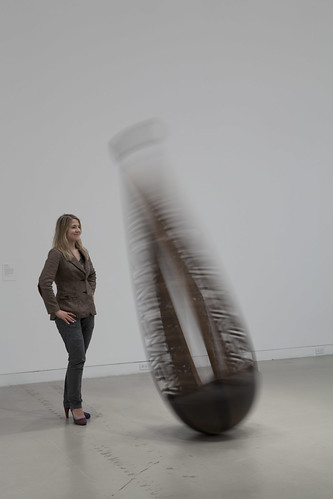 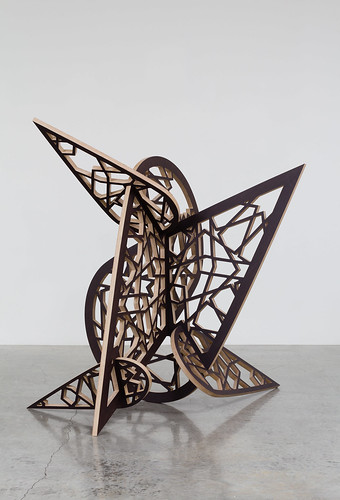 The second series is derived from Harem Years, the memoirs of a trail blazing Egyptian feminist, Huda Shaarawi who daringly lifted her veil in 1923 at the central train station of Cairo on her return home from an international feminist meeting in Rome. This pivotal act marked the end of the harem system in Egypt. Guirguis speaks animatedly on the subject, remarking that despite it being such a bold step for the time, this historic moment is largely disregarded today. Through her paintings which feature intricate hand-cut geometric patterns and ornate gold leafing, she again references the panelled mashrabiyas in the form of windows and doorways. The viewer is obliged to pause and reflect; are we gazing out into the world, sheltered and cloistered or are we on the outside looking in? 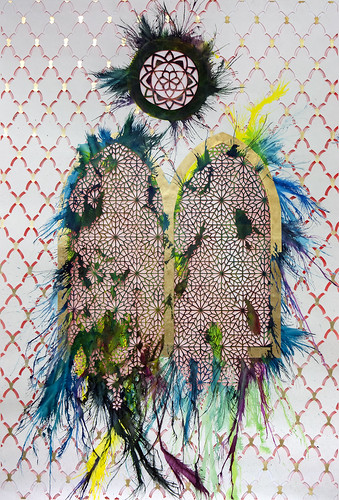 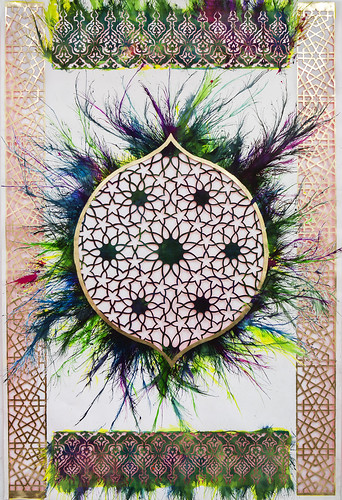 Guirguis’s artistic interpretations stem from her intellectual curiousity, engaging a modern audience with historic touchpoints that continue to resonate in this day and age.

Passages//Toroq runs till 5 December 2013 at The Third Line.

About The Third Line
The Third Line is a Dubai based art gallery that represents contemporary Middle Eastern artists locally, regionally and internationally. The Third Line also hosts non-profit, alternative programs to increase interest and dialogue in the region.

The Third Line also publishes books by associated artists from the region. Books published to date include Presence by photographer Lamya Gargash (2008), In Absentia by Tarek Al-Ghoussein (2009), Cosmic Geometry, an extensive monograph on Monir Shahroudy Farmanfarmaian, edited by Hans Ulrich Obrist and Karen Marta (2011), and most recently the self-titled treatise Huda Lutfi about the artist’s Cairo based practice.