With 82 artworks spread over 5 locations, the fourth edition of the Singapore Biennale (SB) is truly a mega exhibition. Its theme of “If the World Changed” focuses mainly on the Southeast Asian region and has been co-curated by a team of 27 curators, some of whom are practicing artists.

With 82 artworks spread over 5 locations, the fourth edition of the Singapore Biennale (SB) is truly a mega exhibition. Its theme of “If the World Changed” focuses mainly on the Southeast Asian region and has been co-curated by a team of 27 curators, some of whom are practicing artists. This collective effort has ensured that because of their specialised knowledge of the region, the curators have selected artists and artworks that best represent contemporary practices in each of the 13 countries –- with many of the works being seen for the first time on the international exhibition circuit. This is a refreshing change, as with so many biennials and triennials taking place in the region during the year, one often sees the same artist and artworks again and again.

The biennale is centred mainly within the Bras Basah precinct with the Singapore Art Museum (SAM), SAM at 8Q, National Museum of Singapore (NMS) and The Peranakan Museum (TPM) housing the largest proportion of artworks. Waterloo Centre, National Library Board building, Singapore Management University, Fort Canning Park and Our Museum @Taman Jurong are the other locations of the biennale.

So what does one expect to see in a mega exhibition with the theme of “If the World Changed”? One of the first works that you encounter walking into SAM is a video piece by Singaporean artist Urich Lau titled The End of Art Report, 2013. TVs mounted on the wall in the reception area announce the fictitious news of the impending closure of three of Singapore’s cultural institutions. The work highlights the value and place of arts and culture in the island state as well as reflects on real closures that happened around the world during economic downturns.

Another work that immediately captures your attention is Telok Blangah, also by a Singaporean artist, Ahmad Abu Bakar. A traditional Malaccan fisherman’s boat is filled with glass bottles that contain messages from the inmates of Changi prison. The messages are the hopes and aspirations of what the inmates would like to do once they are released. The work is interactive in that the visitors can write back to the inmates and the title of the work, Telok Blangah, references an area in Singapore where Malay royalty once used to live during the colonial period. Abu Bakar’s work suggests that the prison’s inmates are lost (at sea) and asking for help through the messages in the bottles, and hosted on a boat, these inmates, though living within Singapore, are almost like outsiders within the society. 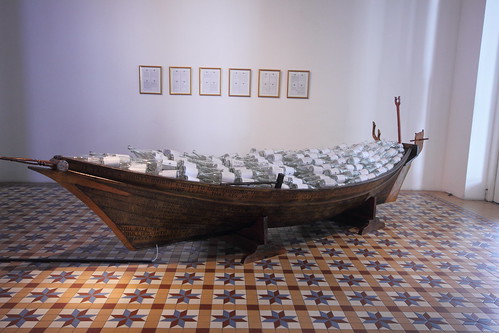 Hidden in the corner of the museum, on the third floor is teamLab’s spectacular interactive animated diorama, Peace Can Be Realized Even Without Order 2012. On entering the room, the motion sensors activate different responses from the images of primitive dancers and as one navigates around the room, a personalised orchestra is set forth. Using the reference of indigenous Japanese festivals and dances where music and dance performances were orchestrated without a conductor, teamLab questions whether different societies can co-exist peacefully without top-down intervention. 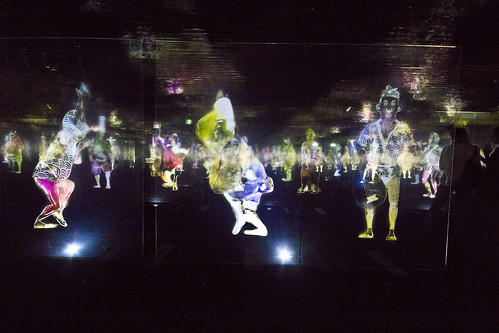 teamLab, Peace Can Be Realized Even Without Order, 2012

Across the road at NMS, Indonesian artist Eko Prawato’s Wormhole 2013, greet you on the main lawn of the building. The three bamboo structures, which resemble mountains are at once alien to the cityscape of Singapore but on entering them, the smell and feel of bamboo and the view of the sky and nature from the openings at the top, remind one of a time when life was simpler and the sensations of bamboo and nature familiar. 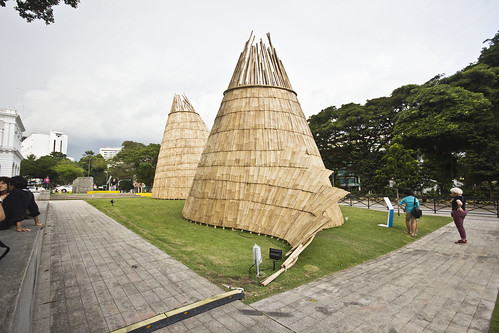 Inside the building, also inspired by the environment, is Ken + Julia Yonetani’s work Crystal Palace: The Great Exhibition of the Works of Industry of all Nuclear Nations, 2012-13. Using antique chandelier frames, uranium glass and UV lighting 31 stunning but haunting green chandeliers pieces have been created with each piece symbolising a nuclear nation. The work was inspired by the Fukoshima Daiichi nuclear accident in Japan in 2011, and its exhibition in Singapore marks the completion of the series as well as its first international showing which is befittingly in the non-nuclear Southeast Asian region. The title of the artwork references the 1851 Great Exhibition that was held in London to showcase the technological developments and achievements of the countries of the world post industrialization. 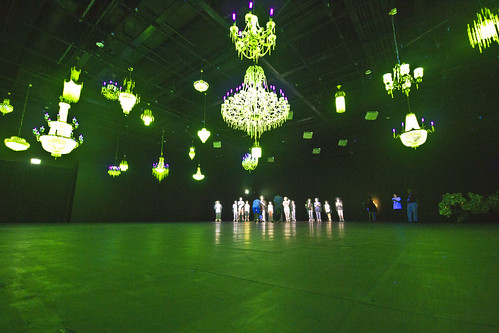 Ken + Julia Yonetani, Crystal Palace: The Great Exhibition of the Works of Industry of all Nuclear Nations, 2012-13

The works in the biennale reflect the socio-cultural, political, economic, and aesthetic complexities of South East Asia. With a theme that is so wide and diverse, the biennale invites the audience to contemplate these issues of a changing world not through a country specific lens but through the more fluid filters of 20 evocative keywords that emerged during the curatorial and artistic process. These terms, like ancestries, histories, testimonies, cosmology, geographies, apocalypse, locus and interruptions invite the viewers to consider the works within these evocative zones rather than the rigid boundaries of one or two themes.

The Singapore Biennale runs till 16 February 2014. Visitors can join guided tours at the museums or use the smartphone application SB2013 to access time-based walking trails and information on selected artists and artworks.