The Palm Island riot and its aftermath are the focus of Indigenous artist Vernon Ah Kee’s latest exhibition Tall Man, held in conjunction with the Melbourne International Arts Festival and Gertrude Contemporary. Comprising three segments – a video installation, a portrait and a text work – the series is a devastating examination of the ongoing cruelty and official indifference toward the Aboriginal Community in Australia. 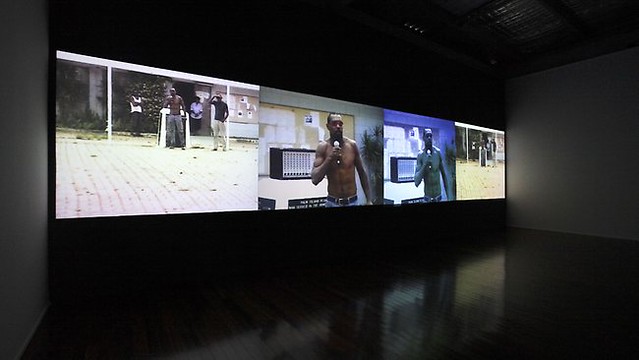 A little background. In 2004, Indigenous Australian Cameron Doomadgee was brutally murdered at the hands of a white officer while in police custody, sparking riots on Palm Island in North Queensland. Doomadgee was first arrested for public drunkenness and reported dead an hour later, having suffered from four broken ribs which had ruptured his liver and spleen. His death was recorded as “an accidental fall” in the coroner’s report and all charges on the officer were later dropped in 2007.

In his powerful four-channel video installation, Tall Man, Ah Kee appropriated footages from mobile phones and camcorders, which is edited together with archival news footages to reconstruct the day of the rioting and the unfolding of events. An overall sense of chaos and urgency pervades the work. Viewers have to negotiate between the four channels which simultaneously offers a different perspective of the same event. Each footage ends quite abruptly, rhythmically disrupted by television test signals and its accompanying single-frequency tone. We witness the anger and distress of main protagonist Lex Wotton (tall man) and the Palm community when Doomadgee’s cause of death was declared an accident. The footage showed Wotton walking up to address the crowd: “Come on, people, we all wanted this! We wanted to know. Will we accept this?” In following sequences before the anticipated riot, policemen were filmed kitting themselves up to “scare the shit out of these cunts”, as one of the officer says. It is hard to leave without feeling a sense of urgency and discomfort.

Ironically, the raw footages used to compose the video were used in court as evidence to convict Wotton of inciting the Palm Island riot. But in the hands of Ah Kee, they tell a different story of the injustices faced by the Aboriginal community in Australia. Why isn’t Palm Island talked about today? Works like Tall Man expose certain truths about race relations in Australian society and the manner in which discrimination of the Aboriginal Community are still lost within a collective amnesia. If a protest falls in the woods and there’s no one there to hear it, does it make a sound? 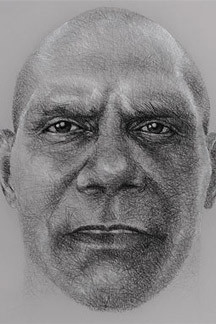 Another component of Tall Man is a larger-than-life portrait of Lex Wotton. Ah Kee articulates a strong human presence using subtle, gentle lines. Unlike the angered and dispirited Wotton we see in the video installation, the up-close portrait shows Wotton looking unthreatening, his gaze calm. Ah Kee conveys the softer, warm-hearted nature of Wotton. He also succeeds at what is difficult in portraiture – rendering the wisdom that lies beneath the visage, and ultimately, independent of appearance. 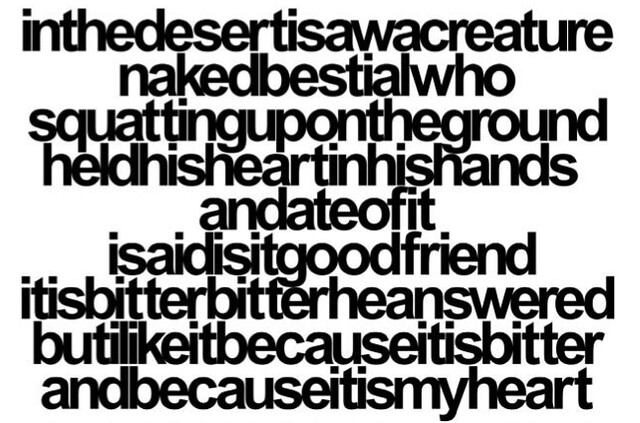 “Fill Me”, Vinyl lettering, 2009. Image courtesy of the artist and Milani Gallery, Brisbane

The final component of the exhibition is a large text-based work that fills the entire front display windows of Gertrude Contemporary. It’s a verse from Shakespeare’s Lady Macbeth (Act 1, Scene 5) reproduced as a run-on sentence. The seventeenth century allegory of man’s endless cruelty to man is re-written for today and alive to the realities of race relations in Australia.

As a whole, the exhibition coheres tidily. Ah Kee’s practice has long examined the superficial attitudes toward multiculturalism and the constructed representations of Australian history. In Tall Man, Ah Kee seems to beg the question: If it is commonly accepted that history has only ever been written by the victors, why have we still stuck to this story? How is the Aboriginal Community to exercise their freewill and voice their distinctiveness when they are ceaselessly prevented from demonstrating such rights? Just when it seems that Australia has been making some progress, the glass of illusion is all but shattered once again with the recent major policy shift by the Baillieu government to dump the compulsory protocol of acknowledging the traditional Aboriginal land owners for being too politically correct. The resurfacing narrative of the Palm Island riot as a reminder of the continuing lack of respect and real embrace of Indigenous culture is apt.