Performance art is a strange thing. As a live event it happens in the moment, unrehearsed. It can be a solitary performance by the artist or a public one- in which case it evolves with its participants often beyond the artist’s control and into something very different from what was initially envisioned. Perhaps that is the beauty of this open ended art form.

Performance art is a strange thing. As a live event it happens in the moment, unrehearsed. It can be a solitary performance by the artist or a public one- in which case it evolves with its participants often beyond the artist’s control and into something very different from what was initially envisioned. Perhaps that is the beauty of this open ended art form. 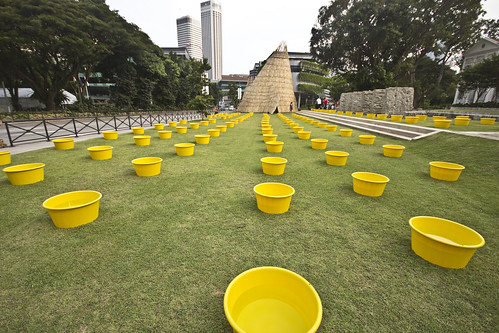 The mandi bunga or flower bath is a centuries’ old folk tradition that has transcended cultures and religions to become a truly Southeast Asian ritual, practiced by the Indians, Chinese and Malays. Its purpose is to rid oneself of bad luck and negative vibes in order to improve one’s aura and attract good luck and fortune. Hoping to accomplish this renewal collectively, Malaysian artist, Sharon Chin’s Mandi Bunga (Flower Bath) opened the Singapore Biennale 2013. The artist and one hundred volunteers came together to first design and paint their yellow sarongs and then to have a mandi bunga together on the front lawn of the National Museum Singapore. The act was performed here in Singapore by people of various backgrounds, age, gender and nationality. 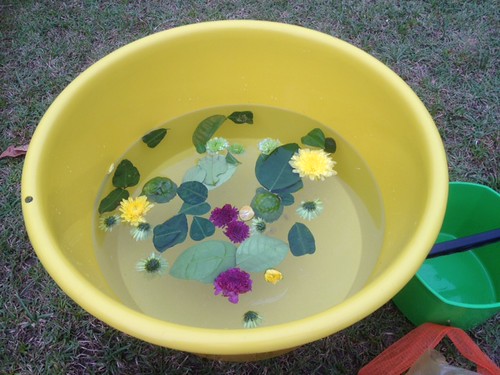 Getting the bath water ready with kaffir lime and pomelo leaves, flowers and calamansi and lime fruit for the Singapore Biennale 2013 Mandi Bunga (Flower Bath). Courtesy of Helmie Kremers. 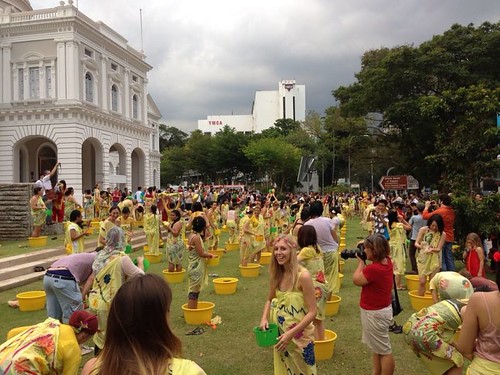 On a personal level, the idea of throwing away the bad to attract the good appealed to me and was my reason for participating. Many other people, when asked, said they thought it would be fun and that is why they had joined in. The performance began with everyone walking from the Singapore Art Museum building to the National Museum lawn across the road where yellow tubs had been placed ready for use. Sharon signalled the start of the performance by waving a yellow flag. We began by infusing the bath water with a potpourri of kaffir lime and pomelo leaves, calamansi and lime fruit, colourful flowers and their petals – each element bringing its own energy and fragrance to the mix. Many then indulged in a full leisurely bath but others who were a bit reluctant to pour water over themselves publicly simply washed their arms, legs and face. In another corner the mandi bunga turned into a Songkran festival as some of us decided that they would help those a bit shy by lobbing bucketfuls of water at them which of course invited retaliation and eventually resulted in everyone getting a good soaking anyway! Whatever the method, the mandi bunga happened at the designated time and space with the participants all taking a ritual flower bath until Sharon signalled the end of the performance by taking off her sarong and flicking it, which was followed by the rest.

A few thousand miles away in the Pakistani city of Karachi, another public performance began on the same day at midnight. A four minute composition on the flute titled Chayn ki Bansuri (the flute of peace) was broadcast across the city via local radio channels. People were requested to participate by either tuning in or downloading the track and playing it on their phones and computers at the selected time to create a collective interlude of peace in a city where people live amidst constant tension and fear. The decision to hold the performance at midnight was to create a period of harmony at a time when most people are back into the safety of their homes, hoping to unwind before facing the city again the next day. The event was a public art project created by the Pakistani artist Durriya Kazi and part of Pursukoon Karachi (Peaceful Karachi), an initiative by the city’s Koel Gallery to promote peace in the city via various art forms. Kazi called the performance a way of empowering people to create peace even if for a few minutes. The exact number of people who participated cannot be known as it was an open event staged via digital media. Volunteers had distributed leaflets across a wide cross section of the city to involve as many people as possible in the city of 20 million but how far the initiative reached is beyond measure. On the night of the event, volunteers drove around the city playing the track in their cars and with their windows down, to envelope the whole city in the melodious and peaceful sound of the flute. There were participants from other Pakistani cities and overseas as well, who joined in by playing the track at midnight Pakistan time. The responses to this performance were as varied as for the Mandi Bunga (Flower Bath). Some loved the idea while others thought it a frivolous act that achieves nothing. Some participated wholeheartedly, inviting others to join in while others threw away the leaflets before even reading them.

The art in both cases happened at that moment. At 6 pm Singapore time for Mandi Bunga (Flower Bath) and at midnight Pakistan time for Chayn ki Bansuri. The performances cannot be replicated and only fragments of the responses and emotions it evoked can be documented. In Mandi Bunga’s case, the photos of the event as well as flowers and leaves remaining in the water tubs will be exhibited at the Singapore Art Museum at part of the Singapore Biennale 2013. Chayn ki Bansuri will live in the soundtrack, the tweets and posts on social media and in the collective memories of those who participated.