At the private showcase on the evening of 4th of November at Gajah Gallery, the dazzling exhibition opens with a feature of Swarovski’s catwalk jewellery pieces created in collaboration with renowned European and American designers. – Geraldine Lee reports 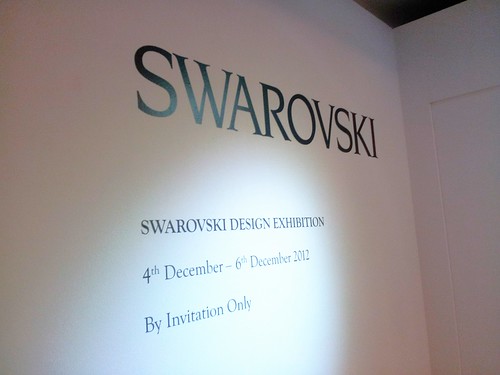 At the private showcase on the evening of 4th of November at Gajah Gallery, the dazzling exhibition opens with a feature of Swarovski’s catwalk jewellery pieces created in collaboration with renowned European and American designers. Amongst the line-up, there is a sculptural necklace from the architect Zaha Hadid and several statement hats from milliner Philip Treacy.

Swarovski also challenged designers to redefine lighting and the traditional concept of the crystal chandelier. Strikingly beautiful and contemporary, there is a glittering chandelier that resembles the long branches of a pine tree shrouded in snowflakes. It is a far cry from the chandeliers of old.

And what would bling designer dresses be without the quintessential element of hand sewn crystals? Swarovski celebrates its fashion heritage with a display of gorgeous frocks from such design luminaries as Prabal Gurung, Hussein Chalayan and Jason Wu that all feature Swarovski Elements. Also featured are three forward-thinking creations by third year Fashion Design and Textiles BA (Hons) students at the LASALLE College of the Arts. The students were given the opportunity to explore and experiment with the vast range of Swarovski crystal elements available for fashion application before submitting their designs. Their three creations – Cyber Body, Femme Fatale and Shadows debut at the exhibition. Swarovski has a tradition of supporting design students and they hope to build long-lasting relationships with the growing Asian design community just as they have done in the Western hemisphere.

An alcove at the back of the gallery plays a video montage of Swarovski’s silver screen connections. Since the advent of Hollywood, costume designers have worked with Swarovski Elements to create iconic pieces such as the spectacular necklace that draped Audrey Hepburn’s Holly Golightly in Breakfast at Tiffany’s, or the shimmering costume for Nicole Kidman’s character, Satine, in Moulin Rouge. Swarovski has also added its glamour to the James Bond franchise, having shaped the look of seven Bond films. In the latest, Skyfall, Bond girl Sévérine played by Bérénice Marlohe sparkles in a black satin and tulle sheer-panelled, Swarovski-encrusted dress. Swarovski and Hollywood is certainly a match made in designer heaven where dreams really do come true.

The private exhibition runs till 6 December 2012 at Gajah Gallery at the MICA Building at Hill Street. Admission is by invitation only.
www.swarovskisparkles.com
www.swarovski.tv
www.atelierswarovski.com