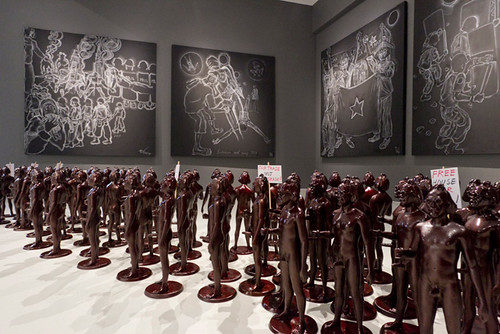 108 small scale and 12 large scale fibreglass sculptures modelled in likeness of Thai artist activist Vasan Sitthiket in the nude, holding up picket signs while sporting full erections line the floor at Yavuz Fine Art amid a backdrop of bold new artworks putting the city-state’s authorities’ tolerance to the test.

Curator Iola Lenzi and the artist decided upon an exhibition where history and communication would be central themes. According to Lenzi, the inundation of trivial information via social media has essentially drowned out critical voices, in particularly Southeast Asia where democracy is still in its infancy.

Well known as a socio-political provocateur who campaigns against the negative effects of urbanization and global politics, Vasan recalls the recent history of Southeast Asia through his new paintings. Nine black canvases sketched over with chalk and acrylic depict historic moments of uprising retold under an eclipsed sun- the 1998 riots of Indonesia, the non-violent anti-government protests led by Buddhist monks in Burma (2007), the 1964 and 1969 race riots of Malaysia, the 2010 farmer protest for agrarian reform in the Philippines and even the Occupy Wall Street Movement. Drawn in strong swift lines capturing the spirit of those chaotic and unstable moments, these canvases demonstrate the power of free speech, the right to protest and the sort of democratic change capable of bringing autocratic regimes to their knees.

However, among this regional chaos and fluxus lies a calm red herring. Vasan portrays a naked man reading the national paper of Singapore, the Straits Times, upside down. Two headlines read “Lee Love You” referencing the young nation’s proud patriarch Lee Kuan Yew beside “Temasek Fall: Loose 100 Billions, 2000 Committed Suicide Yesterday”, refering Temasek Holdings, a sovereign wealth fund, run by the Prime Minister’s wife, while the last page boasts of the new Marina Bay Sands casino; which the government ensured was continued to be built through the unfolding global financial crisis. Hinting at the anomally that Singapore might be amidst its ASEAN and even global neighbours, Vasan presents two focal points, one where the masses rally for change and another where critical judjement has clearly been abandoned or muzzled under the weight of mind-numbing rationale and conformity.

This History Series echoes the futurist style of drawing, capturing the momentum of the body while elucidating the feel of a blackboard in an old fashioned classroom. Further enabling disenchanted voices to be heard are the 108 strong army of Vasan dolls mentioned earlier. Audiences at the opening night were invited to make their own mini-picket signs and insert them into the outstretched arms of the sculptures, which is where the subtly interactive exhibition got interesting. Given an opportunity to publicly declare some issue of consequence, most audience members chose to write something non-sensical or redundant which takes us to Vasan’s next set of paintings illustrating the vacuity or passivity of many a citizen when it comes to taking a stake in society, while reminding audiences that a citizen’s right to partake in open public discourse is still highly problematic in most of these countries.

Two large oil canvases “Where Are You From? (Male)” and “Where Are You From? (Female)” present foreign workers- labourers and domestic workers from Malaysia, Thailand, Indonesia, Burma, Brunei, India, Bangladesh, Lao, Vietnam, Cambodia and Philippines coming together to build Singapore but go about “unseen”. This disenfranchized minority, painted with empty speech bubbles face the audience in uncomfortable silence save for one women, possibly a sex worker who says “Cammi Tse says she is still a virgin”. The power of free speech is now offset by the vacuity of celebrity culture and the white noice of twitter, facebook and other popular modes of digital expresion.

Acting as antithesis to the digital are eight outdated TV box-sets of different sizes and make, clumsily stacked in the corner displaying Vasan simultaneously reciting the Constitutions of the ASEAN, while a ticker tape with the words run across the screen, out of sync with Vasan’s timing. From this simple act, the glaringly obvious gap between the highest proscribed law and its application or indeed supression in reality is pinpointed especially in the case of women’s rights in Vietnam or Land reform in Philippines. Illustrating a paradox in our social systems, it is amusing to see Vasan supress a fit of laughter as he reads the extract on Freedom of Speech and Assembly from the Constitution of the Republic of Singapore.

Vasan raises a number of afflictive questions for a global audience: With numerous digital outlets for our thoughts- what are we doing with our voice? Have we become apathetic towards civic concerns? Is freedom of speech a right or a responsibility?

Vasan, however, rounds up the exhibition with a fairly serene and optimistic mural. Necessary Needs and Nations (States’ Dreams) imagines the ASEAN countries as living breathing bodies in deep slumber sharing a dreamscape of common goals and aspirations, amid a backdrop of agrerian symbols perhaps suggesting we return to a simpler time of agricultural self sufficiency and establish stronger ties with each neighbouring nation.

Editor’s Note: Bharti Lalwani is an art consultant based in Singapore who writes for several publications across Se Asia, India and Australia. Her main research includes the phenomena of Private Museums and their impact across the region. She has a BA in Fine Art (Central Saint Martins, London) and an MA in Contemporary Art (Sotheby’s Institute, Singapore)