In Kampong Gelam, HARD 13 and clog2

The Oxford Dictionary defines graffiti as ““Writing or drawings scribbled, scratched, or sprayed illicitly on a wall or other surface in a public place”. By definition, then, this eschews all elements of aesthetics within it. Graffiti art however, has its own aesthetics. Originating in the West in the 1960s, it was part of the hip hop culture that emerged then.
Tweet

With public buildings, buses, trains and billboards as their canvas, graffiti artists use acrylic, marker pens, aerosol paints, and stencils to express themselves. Though initially used by street gangs to mark their territory, graffiti art is also used by individuals and organised groups for political and social activism. A well-known artist who falls in this latter category is Banksy.

Graffiti art is also known as street art, which perhaps takes the illicit and illegal element out of it and makes it an acceptable part of public and urban art. Today graffiti artists are recognised as an integral part of the contemporary art ambit in most countries: so much so that their work is often a part of contemporary art exhibitions both within and outside the museum space. In Singapore, graffiti is illegal but walking round the Joo Chiat or Kampong Gelam areas there are ample instances of this art form being alive and in practice. Large and colourful, you can spot it on building walls in quiet alleys, where often the art has been commissioned by the occupant of the building to add character and liven up the environment. The artwork can be nostalgic, depicting images of a simpler lifestyle in the past, or inspired by Western and Japanese pop culture like Manga. However, not all the work is sanctioned and the appearance of sudden whitewashed walls in my walkabouts hinted at some work having been removed. Generally there is no overt social or political imagery in the art and while this may partly be because many artists prefer to self censor their work, graffiti art today has evolved beyond vandalism and activism.

In 2013, the Singapore Biennale showcased the graffiti collective ZNC’s (Zinc Nite Crew) work, Gardens by the Way. Responding to the biennale’s theme of If the World Changed, the installation depicted a multicoloured garden made of discarded plastic bottles which has been spray painted and repurposed into flowers. Commenting on the city’s tagline of Garden City and situated in the city centre in the foyer of the National Library Building, the work was a clever comment on the island’s changing landscape.  ZNC, a Singaporean collective which was set up in 1998 by Slacsatu, Monk, Mesh and Tyro has today expanded internationally. Graffiti artists from Malaysia, Vietnam, Bolivia, Germany, Thailand and Indonesia have become a part of ZNC and their works can be seen worldwide. 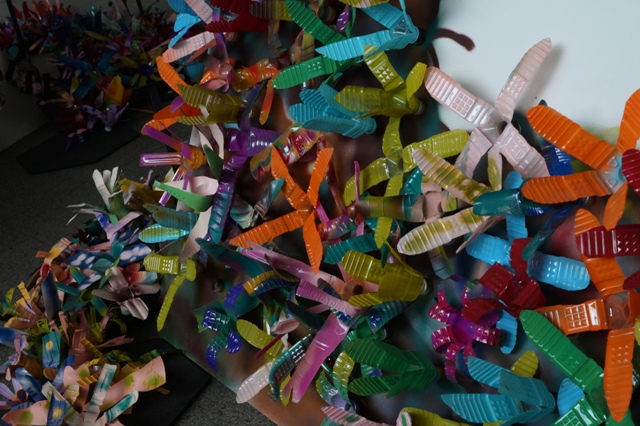 In Vietnam, where art is still controlled to a certain extent, Graffiti art has been popular since 2006. Introduced together with other pop culture elements like rap and break dancing, it has found a following in both Hanoi and Ho Chi Minh City. Artists like Phan Minh Tuan, graffiti crews like The Street Jockey and Sons of God, and not- for-profit art organisations like UFO (Ultimate Futuristic Organisation) have all ensured that the art form is thriving.

In 2013, Phan Minh Tuan, who goes by the moniker Liar Ben teamed up with French artist Sautel Cago on a road trip of two months through the length of Vietnam. Travelling from town to town, they teamed up with 15 other graffiti artists to create works on buildings across the urban and rural landscape (click here to watch the video). While the work was always sanctioned by the property owners it did not always meet with the government’s approval and often had to be removed halfway. The artists drew inspiration from their travels and life in Vietnam. Multinational corporations and international cultural organisations have also lent support to graffiti artists and their work (watch here) which has further encouraged the art form.

An interesting aspect of this sub culture is the terminology that is associated with it. A group of graffiti artists working together is referred to as a crew; an artist’s stylized signature is called a tag; throw ups and pieces refer to different kinds of work; and to bomb is to cover many places with graffiti in an area.

So whats in a name? Does calling art that traces its root to rebellion, subversion and activism change its nature? Has it really yielded another form of public expressionism? Has the context of the art evolved from the voice of angst and revolution to one of nostalgia and community? Or does it still hide cryptic messages behind the benign façade of street art?