Guo-liang Tan makes pretty pictures of flowers, but look again and they are anything but just pretty. In his first solo exhibition, Play Dead – Paintings, in Space Cottonseed gallery at the Gillman Barracks, he paints still life of flowers that are not held by any vessel and float about in ambiguous space. In his installation of paintings, he has managed to capture a sense of history, tradition and image more than flowers or even paint. And for the untrained eye looking at them for the first time, they are marvellous exercises on beauty, motif, memory and mystery. His paintings are a real oddity in the local contemporary art scene. You could even say they are an anomaly, like a wonderful, persistent little blemish. That is why they are unique. These anachronistic paintings critique yet embrace a large chunk of Western illusionism. It harks back to a time art students love to tread, while looking at art books in the library, which made them want to paint in the first place. They have that kind of dingy darkness we do not see any more in paintings, like a Goya, but with the modesty of a Chardin still life and the deft, suggestive strokes of Velasquez or Manet that made them so innovative in their time. 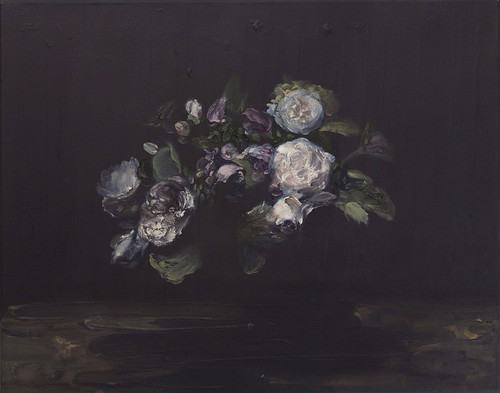 However, the name that strikes me the most is the 19th Century French painter, Henri Fantin-Latour. I happen to be a fan of Fantin-Latour. He painted some of the most sensuous and beautiful flower still lifes I have ever seen. To even own a catalogue by him is rare and I happen to chance upon a second-hand copy from an obscure source off Amazon. I kept this little indulgence to myself, a Singaporean abstract painter liking some little-known French portrait and flowers painter. So when I first knew of Guo-liang Tan’s paintings and to finally see them fleshed out in this exhibition, I felt compelled enough to write about them. Even though Fantin-Latour comes to mind, Tan’s are nothing like his paintings. For one, they do not have the exquisite detail and the feathery stillness of a Fantin-Latour, keenly observed from life. Tan’s pictures dissolve into fluid impressions upon closer inspection. Also, they have diabolical titles that could pass off as song or poetry titles such as “Infanta I” and “Darkstar”. Even more mysterious are the little lumps on some of the surfaces of these works. You do not know whether they are the remnants of old dried up paint or they were purposely applied to create some sort of texture. 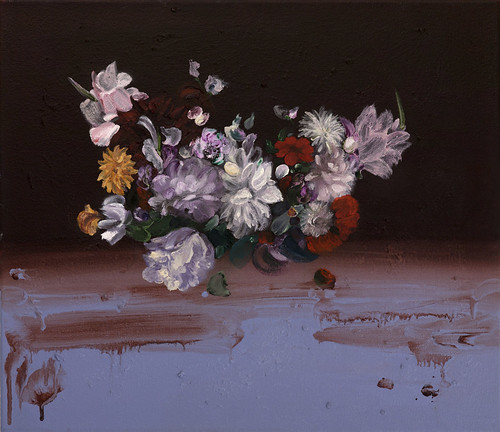 That is exactly the allure of these paintings because they do not reveal every morsel of information needed to complete looking at them. They expound a whole variation of the same theme, and they are not so much stylistic but persistent in a certain obsession with these forms. It would have been tempting to show everything in a solo exhibition —- different subject matter, variety of scale, variety of gesture and skill (photographic or abstract) but Tan does not. They sort of look similar and restrained and relate to one another. Within the installation, there were a few standouts strategically placed — the smoky stunner ‘Witches’, that approaches you straight on from the wall as you enter the gallery, the little piece tucked at the corner called “Dead ringer” that seems to defy gravity and perceptual logic, and the lavender tinted “Some say (I got devil)” where the petals seem to animate within the static frame. These works demonstrate a conceptual rigour and a very learned investigation of image making, perhaps honed by his education at Goldsmith College. They reflect someone who takes his time and thinks about painting. They tell more than they show. Still, what is the connection here in the Southeast Asian tropics and how we look and think about paintings? 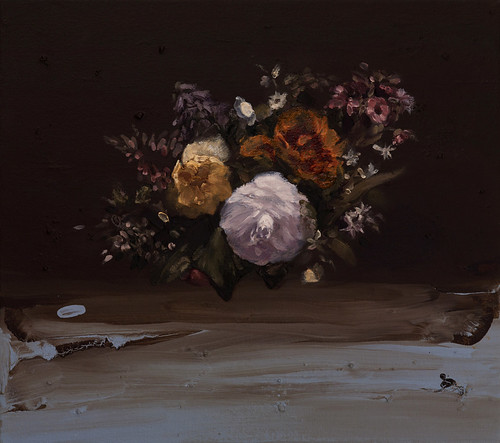 Tan is putting forth a new spin on conceptual painting, which is hardly existent in Singapore and addressing the glaring divide between painting and contemporary art. For the longest time, there was an overarching emphasis on a certain Nanyang School of painting and then a huge leap to contemporary art, which covers anything from a hyped-up starting point of reference in performance art, then to video and new media art, and the current de rigueur trends of ethnographic-driven, community-based, relational, fictively real, and historically re-constructed national art. There seems to be some champions of a kind of dry conceptualism that holds the scene captive these days amidst a growing awareness of institutions to acknowledge that huge missing middle ground and the lost generation of artists. Tan’s current paintings, aside from his curatorial work and writing, pretty much dispenses with most of that and goes into territory that in lesser hands, may fall into pastiche, cliché or even kitsch. Painting is often the only art form to suffer the burden of its own history but in this case, he uses it fully to his advantage. And if contemporary art too suffers the burden of contemporary-ness and South East Asian art suffers the burden of identity, then these paintings ignore these burdens and place them, instead on the viewer who is looking at them. His paintings face the anxiety of history and influence that any young painter today would know —- what we paint, why we paint them and how we paint them in spite of all that has happened.

Naysayers would say these paintings take too much from Western history of painting but it is more like they refuse to deal with any convenient exoticism between East and West and perhaps it is telling, given that he obtains his images from the Internet, that these works speak about painting that is global, democratic and fair game; histories are disposable. Painting for this matter, knows no borders nor boundaries, or identity other than the maker of these works. And why should it be the contrary?

When the Post-Impressionists borrowed heavily from Japanese prints, no one said anything. Likewise with Picasso whose “Les Demoiselles d’Avignon”, inspired by African masks, was to be the precursor to Cubism. Or when the Abstract Expressionists and the American Avant-garde embraced Eastern philosophy and claimed it as their own, it was totally celebrated. Akira Kurosawa the filmmaker went against a lot of resistance from his own countrymen who said his work was un-Japanese when he borrowed much from Baroque painting and Shakespeare to make what is now known as cinematic masterpieces. Why can’t we turn back Western history, a history that is a form of cultural imperialism, back on its head and return the favour?

The painter Gerhard Richter has mentioned he likes working from photographs, because they freed him from any style, comparison, judgment and personal experience. They provided the subject matter and information for his process of painting to be based on. I suspect Tan does the same, but without the detachment of personal experience. There is something personal, intimate and precious about them and the way he reclaims them in their uncanny titles. They resonate with my practice as using abstraction as a vehicle to talk about something else and not as a means to an end. What also made the paintings more engaging, and this could be attributed to the foresight of the gallery director, were the partitions in the gallery that were not of right angles. This affected the way one navigates the space and experiences the works. On one hand, these are beguiling, deceptive paintings that lure you into their abyss. On the other, they are modest, compelling works that operate on a sensuous beauty and intellectual veracity. Guo-liang Tan makes dark pictures of flowers you may have remembered seeing before.

Contributor’s profile: Jeremy Sharma is a painter and a fine arts lecturer at the LASALLE College of The Arts.