If you have always thought Chinese Painting is old school and boring, you should take a day trip to visit this exhibition. 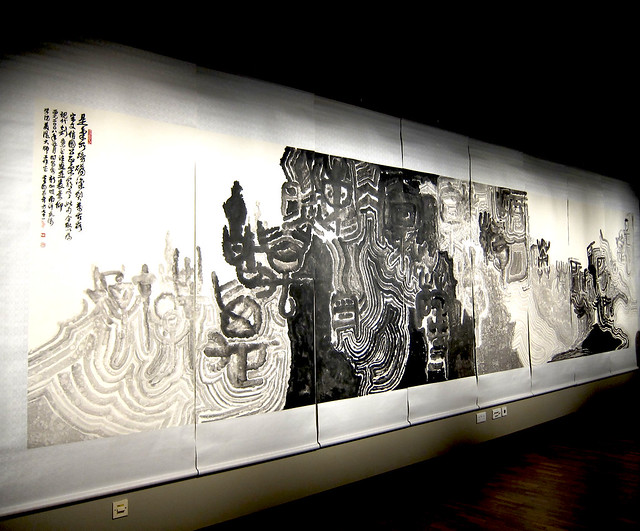 If you have always thought Chinese Painting is old school and boring, you should take a day trip to visit this exhibition.

A Ridge, A Word, A Brush 笔墨交融 – the 11th solo exhibition of renowned alumnus and first Cultural Medallion recipient, Mr Wee Beng Chong (黄明宗), not only showcases the art of Chinese Painting, but displays the virtue of perseverance which many young artists lack. In this exhibition, besides two works done in the 1970s, more than 50 works were recent and completed in the last decade, by the 75 years old Mr Wee Beng Chong. 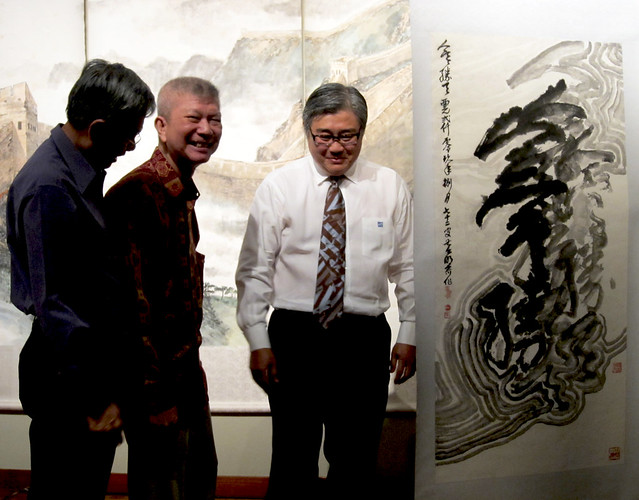 Mr Wee Beng Chong (standing the in the centre) presenting one of his works to NAFA. 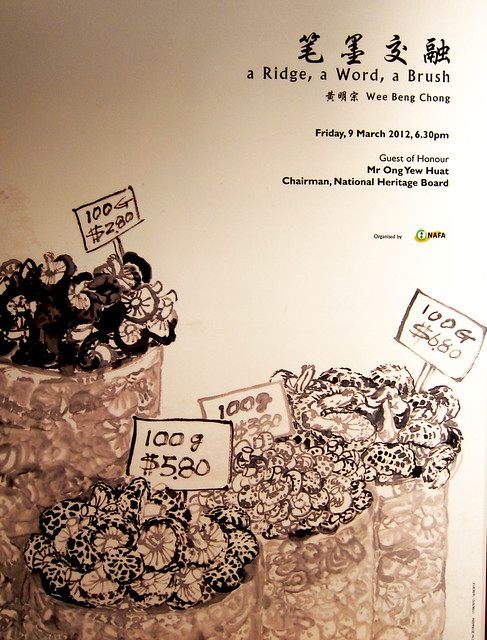 Bridget Tracy Tan, Director of Institute of Southeast Asian Arts and Art Galleries said, “In respect of the ink paintings that Wee has produced over his lifetime, and continues to produce, one understands the true mark of a Chinese painter whose first stroke is the eternal beginning, but also always the last, and indeed, never the final. Ink painting is judged on its own criteria of wet and dry brush, strength and lightness, speed and measured capacity. Wee’s monochromes are exercises in the fluency of his brush, articulately building his space from negative (white) to positive (coloured) and back again. Each of this is a delicate balance that can only be located in the rhythm of the compositions. Stood in a collective, the works provide a scholarly dimension to Wee’s explorations, of his poetic range borne along the rugged lines of his suggestive brushwork.”

I was first intrigued by the email invite where one of the works “Song of Righteousness” (正气歌) was featured. When I saw the actual work (measures 180cm by 720cm), I was speechless. This is a series of eight scrolls based on the famous classic literary work “Song of Righteousness” (正气歌) by scholar-general Wen Tianxiang (文天祥) of the Southern Song Dynasty. Wee has transferred the text of the 300-character poem into an abstract piece of a monochromatic linear exercise, creating a lyrical and painterly ink piece that translates the literary into a visual feat. The poem in its calligraphy form by Wee is displayed beside the eight scrolls. Even if you do not understand the language to read the text, you are able to appreciate the strength of the strokes and the contrast created at each point.

Chinese painting pays great attention to its calligraphy form. In many of Wee’s works, he explores the art of Chinese calligraphy in its oldest root form, the most traditional of all, the oracle bone scripts (甲骨文) – pictorial symbols. Each character was invented based on visual formation and I feel that Mr Wee has captured that essence to its fullest. 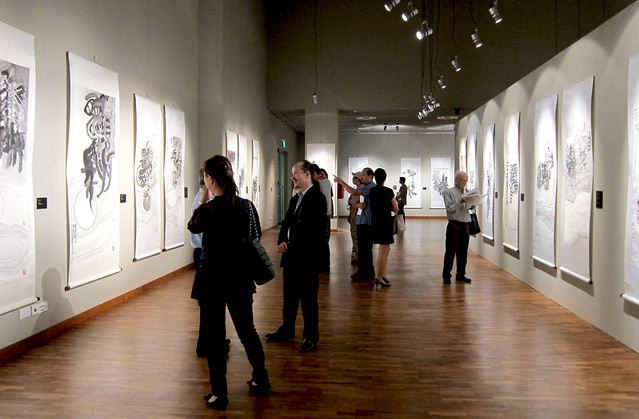 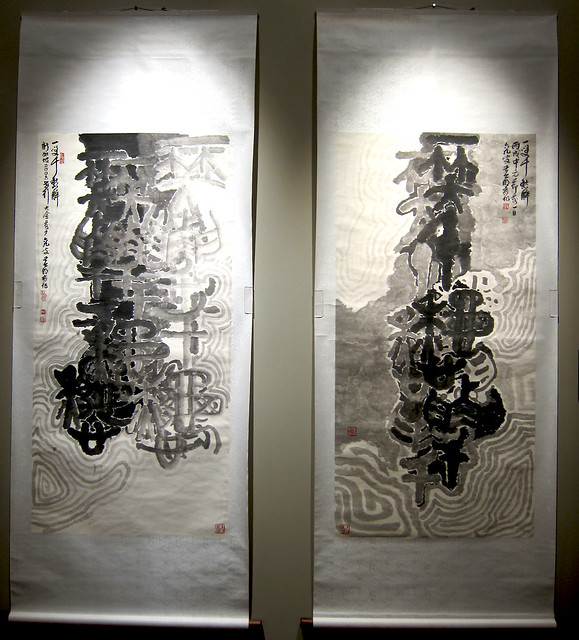 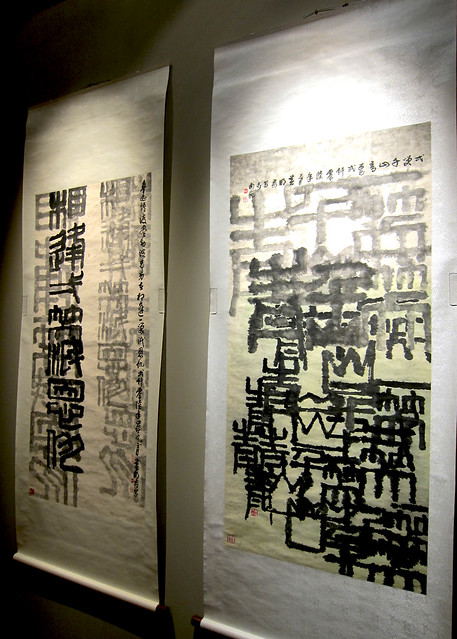 Interesting finds at the exhibition also includes the titles for some of the works. It may be more meaningful if you know the Chinese language. Besides using Chinese idioms for some of the titles, Wee has also injected whimsical titles such as “该死的不死” (Injustice – literally meaning “those who should be dead are not”) and “创意书法” (Creative Writing – See photograph) 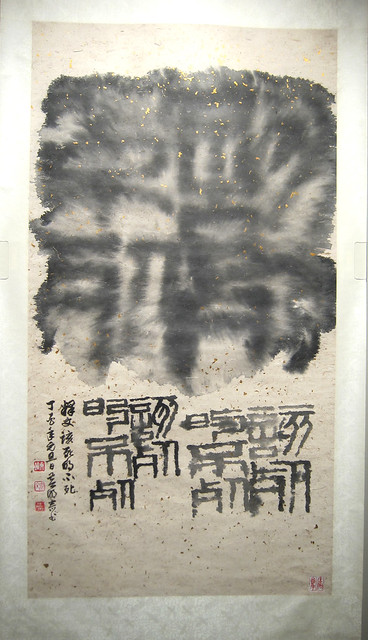 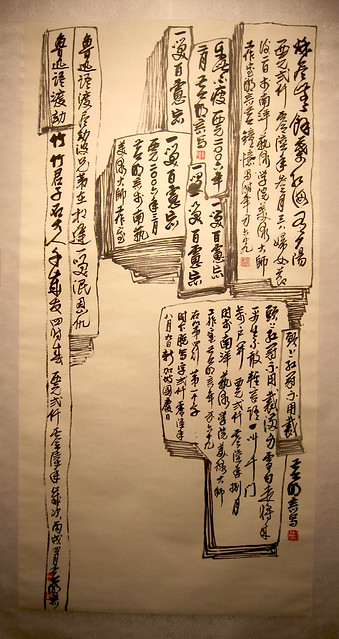 2 Comments on A Ridge, A Word, A Brush 笔墨交融 – Wee Beng Chong 黄明宗