2014 will see Nine Years Theatre off to a banging start, with “An Enemy of the People” followed closely by the company’s Mandarin production of Yasmina Reza’s “Art” for the Esplanade’s Huayi Festival. – Yen Phang reviewed 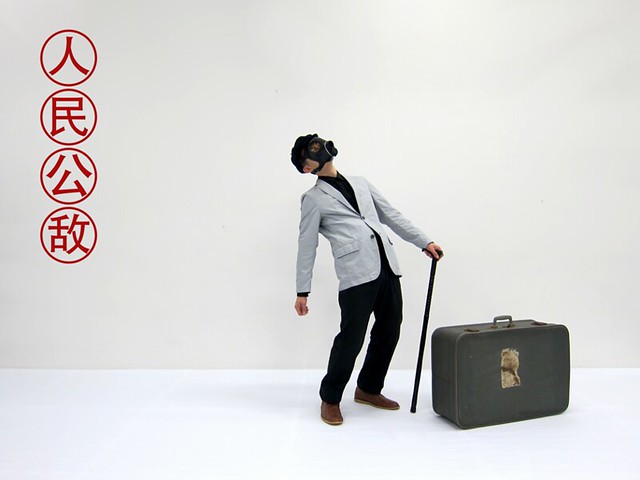 With such a declarative title, and a publicity image of a man defiantly posed with a gas-mask in dapper clothing, “An Enemy of the People” teased at surrealism with a hint of danger. This is a high-octane production which sustains the audience’s attention throughout, speeding by in a clip pace and condensing Henrik Ibsen’s original five acts to just under two hours.

Set in the small town of Kirsten Springs, Dr Thomas Stockmann has made a discovery about the possible toxic effects of their Municipal baths. The baths are incidentally the community’s main generator of tourism income. Initial support which the doctor receives soon turns into collective vitriol against him, and persecution ensues.

In taking on double-duty of directing and adapting/translating Ibsen’s original play written over a century ago (or more accurately, from Miller’s translation of Ibsen which carried a more colloquial flavor), Nelson Chia showed a firm grasp of his material, utilising his five actors in economical fashion. This lent to the briskness of action and tautness in pacing.

Nine Years Theatre has gathered together a fine ensemble of young players who perform their roles with verve and exuberance. The central character under siege, Dr Thomas Stockmann, is performed by Rei Poh with vigour, vulnerability, and sometimes frustrating naivete. Poh wears Dr Stockmann’s convictions and indignation like a second-skin, neither too forced nor polemical.

Of all the characters in Hang Qian Chou’s arsenal (Peter Stockmann, Aslaksen, Captain Horster), his Peter Stockmann is the most effective as a fitting counterpoint to our protagonist. Hang’s measured deliberateness is steady and unwavering, salted generously with sinister side-glances, offhand comments, and almost-imperceptible sneers.

Also circling Dr Stockmann are the characters played by Neo Hai Bin (Hovstad, Morten Kiil). His jester-like countenance in his initial role as Thomas’ instigator and cheerleader, gives way so suddenly to stark betrayals. Neo bring nuance and sincerity to Hovstad in the second act, which makes the character’s turnabout more believable. In the third act, Neo’s portrayal of Morten Kiil seethes with insidious intent.

Amidst a plot shaken by mercurial allegiances and murky agendas, it’s the women in the ensemble that are always a breath of fresh air – Mia Chee (as Catherine Stockmann) conveys her spousal loyalty and concern with clarity and genuine warmth, while Jean Toh (playing Petra Stockmann) charms with her poise and surefooted delivery. Together, they form a steely alloy which grounds the action by providing a strong emotional core.

The ensemble’s juggling act is even more commendable given how their performances are wrapped up in a Brechtian skein. Actors constantly break the fourth wall. The set is open and naked, and there’s no place to ‘hide’ when the actors are not on stage. The surtitles hover above the actors like a constant phantom-like presence and take the place of an absent backdrop. Stage directions are recited out loud by the performers in a matter-of-fact manner.

It’s a smart directorial choice which adds another layer of conversation with the audience apart from the action onstage, letting us ponder more consciously about the nature of adaptations across cultures, languages and time-periods.

In juxtaposing the absence of illusion or realism with the insertion of period costume and antique props, the story becomes more allegorical. It finds its relevance not through direct references to current-day trends, but by leaning even further into the timelessness of Ibsen’s tale about levers of power and critiques of the malleability of the masses.

Chia’s decision to lay bare the scaffolding figuratively opens up the characters’ universe and envelopes us the audience, particular at the end of the second act (which is arguably the jewel of this production because of Poh’s performance). By the time Dr Stockmann delivers his impassioned speech to the town’s people, we’re drawn further and further into the internal workings of Ibsen’s world, and we as a passive audience are incriminated by our silence.

Nine Years Theatre is a welcome recent entrant to Singapore’s Mandarin theatre scene, complementing more established groups like Drama Box and The Theatre Practice. Co-founded by the husband and wife team of Nelson Chia and Mia Chee, Nine Years Theatre has been cementing their status as ones-to-watch after their strident debut, garnering positive reviews and sold out shows for their Mandarin restaging of classic texts like Reginald Rose’s “Twelve Angry Men” and Edward Albee’s “Who’s Afraid of Virginia Woolf”.

2014 will see Nine Years Theatre off to a banging start, with “An Enemy of the People” followed closely by the company’s Mandarin production of Yasmina Reza’s “Art” for the Esplanade’s Huayi Festival. The cultural conversation that Nine Years Theatre opens up with their repertoire is a two-way street… it not only breathes new life into classical ‘Western’ texts, it also gives us a greater appreciation for the place of the Chinese language in multilingual Singapore. If the one of the missions of Nine Years Theatre is to bring in new audiences to the Mandarin theatre scene, they’ve succeeded in making a new fan out of me.

An Enemy of the People