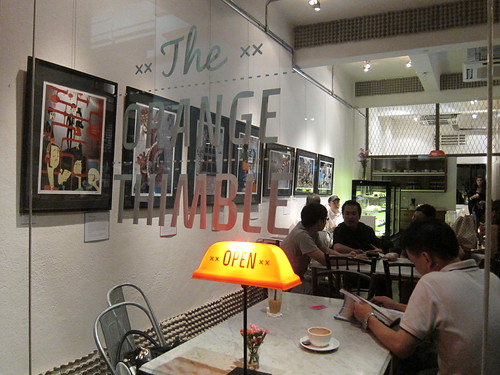 The result of having passion in framing one’s views and doodling one’s thoughts brought together 17 photographers and illustrators/designers in this fun and happy collaboration – Chasing Dreams: The Remaking of Tiong Bahru.

“Chasing Dreams: The Remaking of Tiong Bahru” is an exhibition organised by FLABSLAB, White Canvas Gallery and The Orange Thimble. The organisers themselves are collaborated too! You have the design firm, a gallery, and a café!

The theme simply revolves on-site the nostalgic Tiong Bahru. Marrying the idea of old and new; viewing the sights and sounds through the photographers’ eyes, and tagging on the illustrators’ wildest imagination, we see the interesting remaking of Tiong Bahru.

The collaboration has a bit of game twist. The photographers and illustrators do not know each other. They were invited to create this project, and the photographers went on their clicking trip around Tiong Bahru first. The photos are then sorted and allocated to the selected illustrators. The illustrators will then work on the photographs. It is a silent collaboration, no communication between the two artists. The organiser was surprise to see some of the finished works, how the ideas gel together, or created an unexpected view. 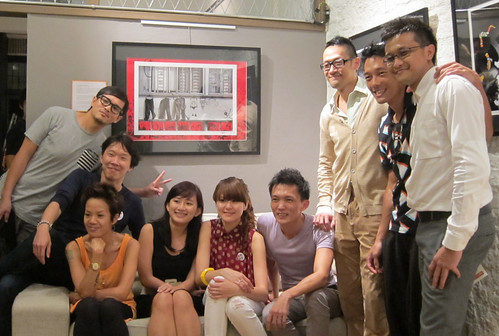 I was glad that I get to meet some of them for a chat and hear their thoughts.

Wanton Doodle’s protagonist was in prim and proper office attire at the opening. He is not “wanton” at all, but he sure doodles a lot. He has an important, serious day job that requires him to be in many long meetings. That is how he develops his talent in doodling and getting the office to buy more pens and pencils. He shared that he started doodling on post-it pad which he handed to his co-workers with important tasks notes written on. They kept the notes even after the tasks have been completed. The notes became artwork on their desks. We are glad to know how art can influence people, and people with important, serious work. 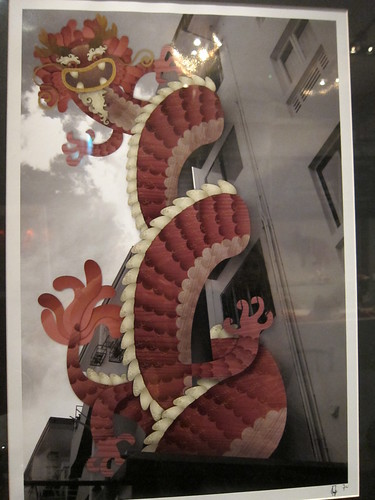 The work “Untitled V” and “Untitled IV” by Alicia Ling and Casey Chen shows a group of superheroes stirring a fight in the back alley of Tiong Bahru. Looking at it certainly puts a smile on anyone. We love black and white alleys that have a power to quietly elude a nostalgic scent. Alicia Ling’s photograph shows the modern feel of Tiong Bahru, where the windows are all shut (because most people have installed air-conditioners, maybe?) and it is quiet. Designer Casey Chen came by and added the whimsical drama that we all missed – a back alley fight! He painstakingly scanned all his collections of superheroes comics and pictures, clean up the edges, re-position them to fit the perspective, one-by-one. 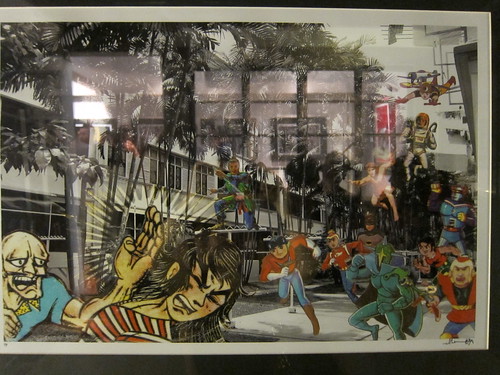 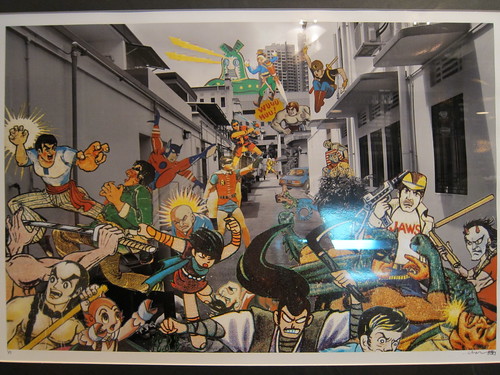 Some of the works are one-piece only as the illustrators have chosen to do the illustrations by hand, manually instead of digitally. For Indonesian-born photographer Jeffri Natasastra and illustrator Pam Yee (aka Papergirl), it was not a blind date to start with, for their piece “Untitled III”. Both of them are good friends and Jeffri explained that they went on the walk-around Tiong Bahru together. In this piece, the photograph presented a sharp contrast of the darkness and whiteness of a window. Pam made use of the whiteness and fill them like a canvas. Her illustrations dance freely and happily in a free-flow movement, alike to her mood on that particular day. On closer observation, you can read her journey that day too, and share the visuals of what she saw and who she met on the way. They told me an Auntie scolded them for being there taking photographs, and it was memorable for them. Find the Tiong Bahru Auntie in their work. 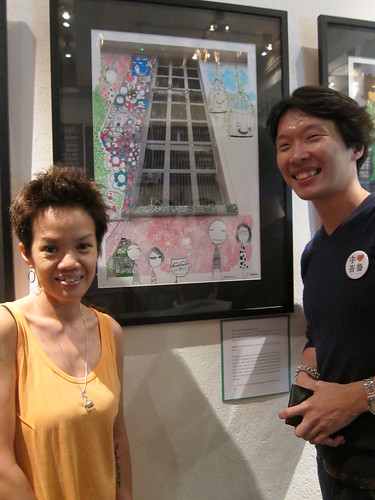 Most of the photographers and illustrators met for the first time at the exhibition opening. It’s like a blind date, and a surprise, pleasant meet up after. The cosy venue of Orange Thimble Café made the gathering more intimate but casual. Everyone was smiling, and happy. The gracious café boss shook hands with me and informed that he wants to leave the lime-light to the artists. It is great news to know that there is such a cosy, humble space for Art, in the charming Tiong Bahru neighbourhood. 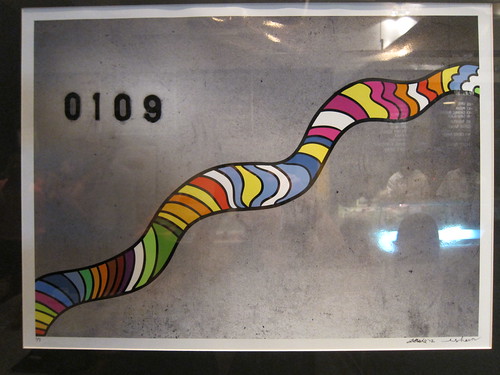 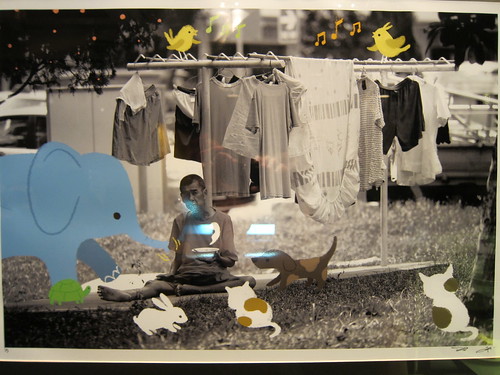 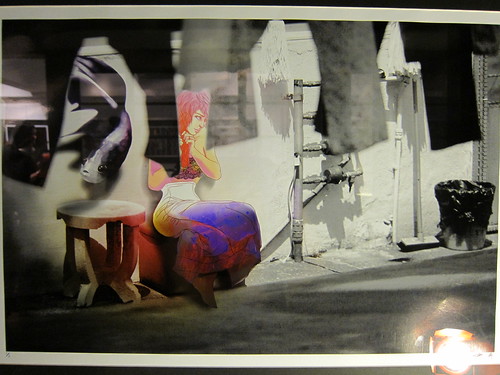 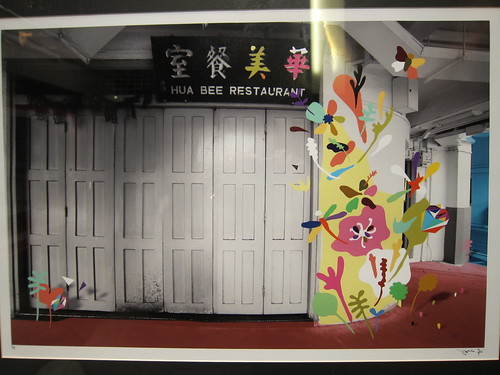 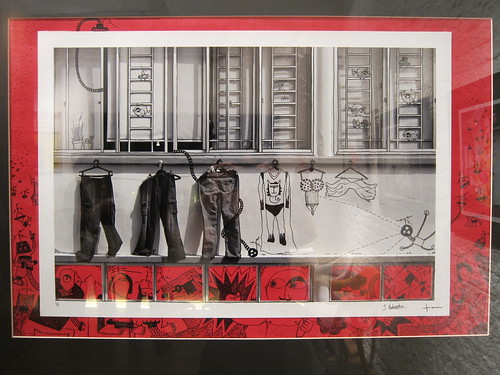 Café Opening Hours
Tuesday to Thursday and Sunday 8am to 9pm
Friday to Saturday 8am to 10.30pm
Close on Mondays