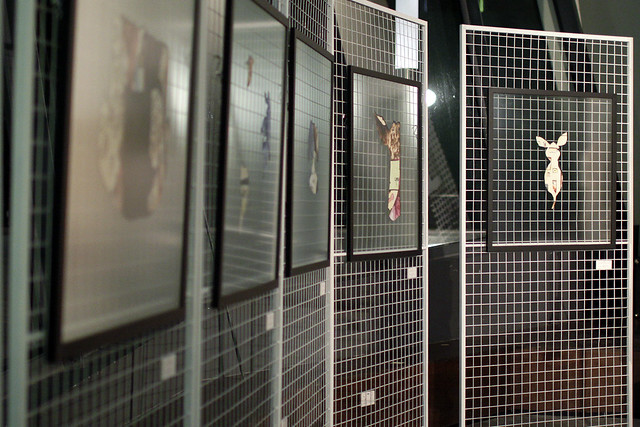 Eunice Lim could not have come up with a more succinct title than “.”. The full stop - a punctuation so succinct, yet so evocative in its function - marking the end of a sentence, signalling the potential start of another idea yet to be expressed.

Lim’s sketchbook plays an integral part of her process, upon which she bases her final paintings. The actual copy of Lim’s sketchbook is a handbound collection of surreal ideas in illustrated form, and is itself an object of beauty. However, it does not cross entirely into the territory of book art; Lim does not fetishize the sketchbook as an object, but rather uses it as a vessel for her fantastical tales, a veritable rabbit-hole of ideas, filled with whimsy and mystery – a tangible manifestation and physical representation of the artist’s wandering imagination. 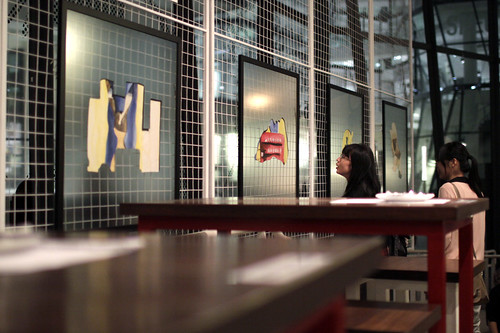 Eunice Lim’s work has immediate pictorial appeal, evidence by her win of the People’s Prize at the Square Invasion Painting Show organised by Ins Tinc last year with her piece “Untold Narratives”. There is an economy in Lim’s brushwork that belies a quiet confidence. Her light-footed use of colour and line is never weighed down by any fussiness or overbearing detail. Each painting is deceptively diminutive in scale, but chockfull of visual cues that warrant second and third viewings. In her tight compositions, Li weaves magical realism with everyday mythmaking.

Their presentation – cutouts of acrylic on canvas encased in glass sheets – works well within the exhibition space, allowing the paintings to breathe and interact with the bustle of its environment, acting like shards of window panes providing glimpses into other possible universes. What Lim chooses to reveal in her intimately-scaled paintings is as intriguing as what she chooses to not to show. They are pointed vignettes, effectively edited to tell a capsule of a story, but also harbingers of larger themes and ideas. 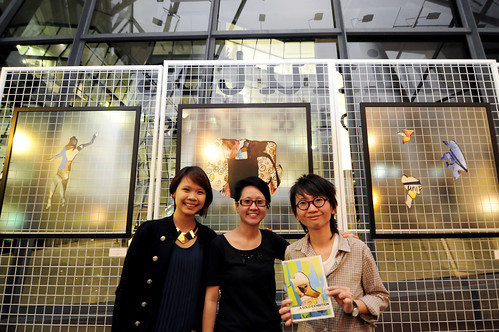 Lim is currently studying in Nanyang Academy of Fine Arts, taking Diploma in Fine Arts with a major in Western Painting. From “.”, we can see that Lim certainly has many stories to tell, but it’s the way that she hooks the viewer with her lucid visual style that makes us inclined to follow Lim on her artistic journey.

“.” runs until the end of March at 15 Minutes @ Lasalle College of the Arts. Eunice Lim will also be exhibiting at the upcoming minimART 2.0 exhibition at the Substation on the 7th and 8th of April.