The Peninsula, Hong Kong is often referred to as the Crème de la crème of hotels in Hong Kong. With its bone china porcelain, Tiffany plates, fully customized interactive digital bedside and desk tablets, Cassina and Poltrona Frau furniture, along with the hotel’s Rolls-Royce fleet the list of attractions just goes on and on. With a history of over 85-years of luxury, it may not come as a surprise that this hotel has an equally impressive art collection discerningly placed throughout the hotel.

Today’s art collection in the hotel was created to tie-in with the launch of the newly renovated guestrooms in The Peninsula Tower, as well as the transformation of the guestrooms in the original building, which had been unveiled in April 2013 to usher in the hotel’s 85th anniversary celebrations. Local bespoke art dealer, Sabrina Fung Fine Arts, worked in collaboration with Mr Peter Borer, The Peninsula Hotels’ Chief Operating Officer, to curate a selection of works which would complete the luxurious elements whilst adding unique local flair.

The majority of the artwork was commissioned from Hong Kong or Chinese-based artists, as well as those with Asian links, along with a few artists who have participated in the hotels residence program.

With so much to see at The Peninsula, the hotel almost doubles as a small, but wonderfully curated private museum.

Standing in the Lobby is a sculpture from American Pop artist Jim Dine, which was especially commissioned for the hotel. Similar to the concept of Yin and Yang, all Fu dogs must be a pair, as is the case here. This famous Fu dog sculpture made of bronze is complemented with its counterpart, a preparatory sketch, which hangs over the sofa opposite the reception counter.

Jim Dine’s Fu dog in lobby looks always alert and ready to protect the patrons of the hotel.

Chinese inspired deities by Chan Yi-dong enhance the entrance along with other historical themed décor.

Complementing the main staircase on the mezzanine floor is an enormous calligraphy by Shanghai–born Mio Pang Fei.

Restaurants have not been forgotten with Gaddi’s, the hotel’s French restaurant, being home to a wonderful piece that has been graciously loaned by the Peninsula Hotel group’s directors. From a George Chinnery to a Henri Royer to a painting by Marc Chagall, the collection is impressive enough to distract you from the what’s on your plate. This large oil on canvas by American artist T. Bumiler adds a splash of colour to the neutral palate of the room. 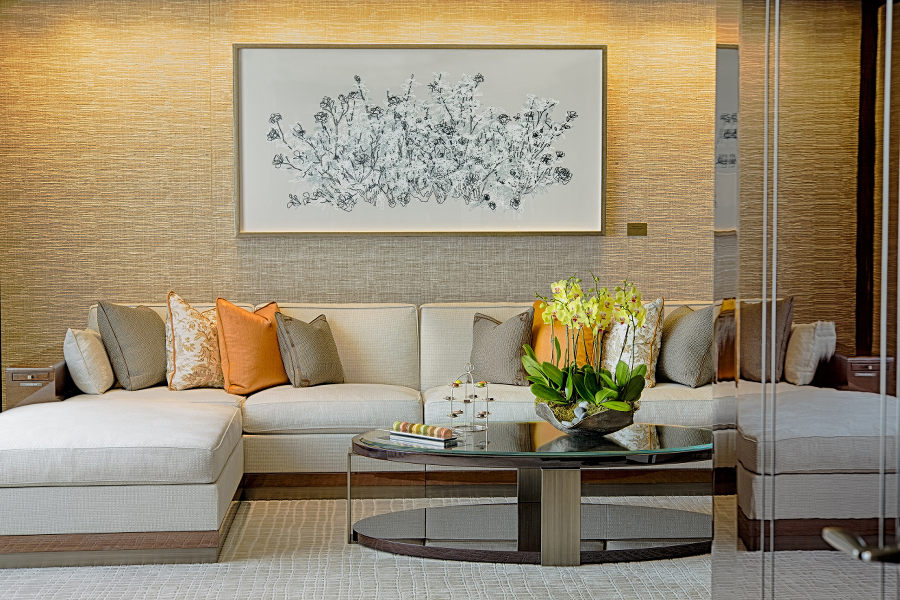 This work by T.Millner syncs in perfect harmony with its surrounding décor.

The hand-blown Lasvit-Bohemian glass chandelier is suspended as so as to emulate birds in flight.

The look of the restaurant is elegantly complemented by a giant coromandel screen by Fong Long Kon of Fatshan from the Ching Dynasty that provides a focal point for the restaurant lounge area. The screen is one of a pair, the other being located at the Metropolitan Museum of Art in New York!

Painted in 1690 during the Ching Dynasty by Fong Long Kon of Fatshan, this priceless screen depicts scenes from the Summer Palace of the Emperor K’ang-his.

Even the Peninsula Spa has artwork! Works include sculptures, video installations and floral creations by Asian and American artists, including the video “Breathing Wall” by Monika Bravo in the lift to transition the guest from urban intensity to surreal calm.

For those of you who may not be lucky enough to be staying at the hotel, Artitute has had sneak peak at some of the artwork in the hotel’s guest rooms.

The corridors that lead into the rooms are decorated with photographic works depicting urban scenes of Hong Kong, these works are created by various award-winning local photographers which include the renowned Alfred Ko and William Furniss. Throughout the hotel are watercolours and historical photographs of Hong Kong and Shanghai, which are loan from the collection of the Kadoorie family.

To fall in line with the newly renovated guestrooms, the artwork was specially selected for the interiors to offset the neutral palette of colours that are found in each of the rooms.

Each room contains a unique individualised wall motif by Hong Kong art collective the Li Yan Project. Other works that depict serene scenes such as plum blossoms swaying in the breeze, motifs and symbols of the city’s cultural heritage, wooden birdcages, song birds and vintage postage stamps are also present to create a connection between the visitor and the city.

If all this wasn’t enough the hotel also offers a special program called: “An Art Dialogue with Hong Kong” which is a customized tour where the guest is chauffeured in the hotel MINI Clubman to visit artists and select galleries or curated exhibitions around town.

The program then offers an exclusively designed set menu lunch at the two-Michelin star Cantonese restaurant, Duddell’s, before being driven back leisurely to the hotel.

For all this and more, we believe that the Hong Kong Peninsula encapsulates the artistic spirit of Hong Kong indulging the artistic senses of its patrons and Artitute hopes to see more hotels embrace that spirit and support the arts.