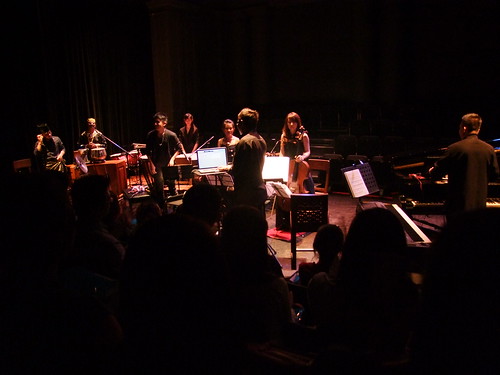 During the send-off party for the Singapore Spotlight — Bratislava and Prague team, we had the pleasure of listening and watching this performance of Living Dreams: Concert Suite At Dawn, a specially commissioned chamber work.

You can listen to Living Dreams here. If your web browser has the necessary support, you should see the audio play and stop buttons, and it works when you click play. If not, please try upgrading or using another web browser.

“Within darkness, a single streak of light traces its way across time, across space.

Within the dream, a blink of the eyes, the pulse quickens, the rhythms of a sleeping body awakes in its dream.

Are we at rest? Who lives in our dreams?”

“That moment between sleep and waking.

That feeling of floating, being adrift between darkness and light, night and morning.

The seduction of sleep draws you back to dream: the temptation of the day asks if you want to make it all happen.

You rest on the rays of dawn.”

“A flutter, a flourish, and a tender moment enters.

“The breath that takes you away.”

“A morning has broken.

What do we leave behind? What do we move ahead with?

We live them, those Dreams. Living, Dreams.”

Natasha Liu, Cello. She has even performed for Queen Elizabeth II.

Indra Shahrir, Keyboard. He was a popular EMI recording artiste in the 1970s.

M S Maniam, Tabla. Music has brought him to almost 89 countries and he is the resident percussionist at Zouk Club.

Rit Xu, Flute. Versatile with Eastern and Western classical flute playing, he was the soloist at the world’s 1st Youth Olympic Games.

Tay Zhiwen, Erhu. She was one of the soloists in a concert with the Singapore Chinese Orchestra.

In the actual ensemble, there was a vocalist and a band from Slovak Republic which included a traditional musical instrument, the Fujara. In this preview, the instrumental parts were “played” by a computer with a fruit logo.

We thank The Old Parliament House Limited for giving Artitute the permission to record the audio and take photographs during the performance.