M-trospective is not only a light-hearted, humorous and shameless reference to the artist; the title also brings up notions like ‘retrospective’ and ‘introspective’.

Meticulous and methodical is how I would describe Michael Lee’s works and interestingly enough, his decade-long mini retrospective now being held at Studio Bibliothèque at The Goodman Arts Centre is titled M-trospective: Michael Lee’s First Decade 2001-2011.

M-trospective is not only a light-hearted, humorous and shameless reference to himself; the title also brings up notions like ‘retrospective’ and ‘introspective’. Lee intends not only to look back and reflect but also to engage the world ahead with his artistic explorations.

The small, well-curated space at Studio Bibliothèque offers up a “best-of” Lee’s works. On show are architectural models, books, blueprints, mindmaps, photographs, posters and documentations in the forms of catalogues and videos, as well as anthologies edited by Lee. Through these works we see the evolution of the artist. Not classically trained, Lee has a Master and Bachelor of Communication Studies from Nanyang Technological University. Coming to art through a non-traditional route, he is as such, able to offer up fresh perspectives.
Michael Lee is a dream to talk to. In conversation, he is well and soft-spoken. I asked him to name his favourite work, to which he replied, like a true perfectionist, that he couldn’t say, “You beat yourself up about it after it’s finished.” 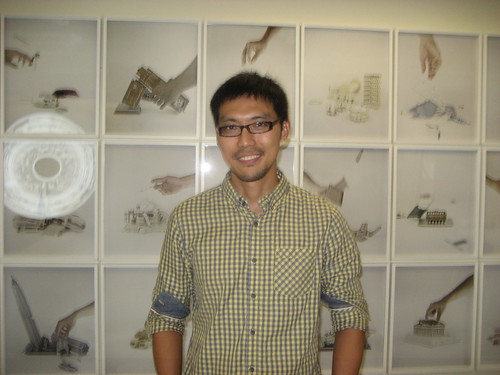 Michael Lee with his series, After Humans. 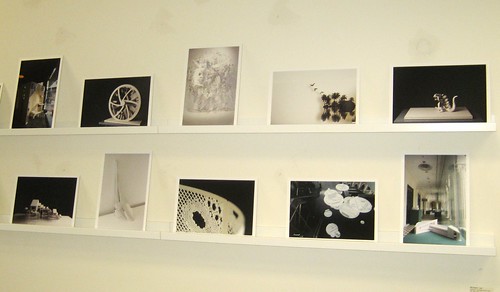 Other works on display in the studio. 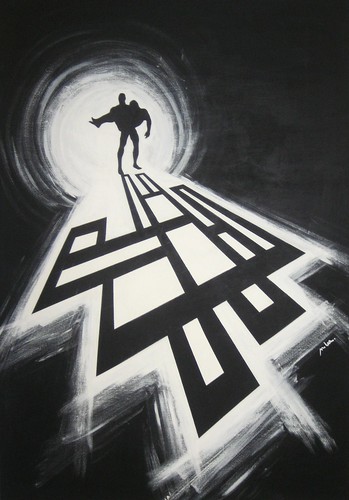 A rare painting: The Work of Blindness in an Age of Electronic Repercussions, in which Lee appropriates a Tom of Finland image.

Lee continues, saying he used to be “buttoned-up” but the turning point for him came during a two-year stay in Hong Kong. Invited to be a Visiting Scholar at the Chinese University of Hong Kong in 2007, Lee decided to stay on when he “fell in love with” the Fo Tan estate in the New Territories, a strange mix of heavy industries, retail shops, frog porridge restaurants and artists’ studios. “The sheer diversity and juxtaposition of activities in Fo Tan was uplifting,” says Lee. He realised that he didn’t always have to be so formalised. He got to relax and being out of his comfort zone aided his artistic development.

I also quizzed Lee who was the People’s Choice Award winner at the recent APB Foundation Signature Art Prize 2011, after having worked with Bob Matthews on Utopias (2011), about his views on collaborations. “The best collaborations happen when the artists fight.” He explained that honesty is essential: You have to speak your mind and lay the ground rules from the outset. The creative process between the artists has to be like a ball game where you bounce ideas back and forth.

Lee’s latest works give a thoughtful perspective on a post-human world as seen in the series After Humans (set of 21 parts), 2011. In this series of digital prints, we see models of architectural icons like the Eiffel Tower and the Arc de Triomphe in disarray. In some of them, the artist’s hand appears to be doing something to or with the models. There is an ambiguity as to whether this hand is a creator, preserver or destroyer.

Catch Lee’s exhibition that runs till 29 April, before he embarks on his year-long artist residency programme at Künstlerhaus Bethanien, Berlin, from June 2012.