The M1 Singapore Fringe Festival returns for its eighth outing, starting from the 15 February to 26 February 2012.

The M1 Singapore Fringe Festival returns for its eighth outing, starting from the 15 February to 26 February 2012. Organised and curated by The Necessary Stage, the festival showcases Singapore and international works from artists of several genres, from dance and theatre to visual arts.

M1 SINGAPORE FRINGE FESTIVAL 2012: ART AND FAITH
Art and faith have always had a contentious relationship. While art challenges norms
through questions and critiques, faith relies on a confidence and belief in the tenets of the
present day. As such, the freedom of expression as espoused by art is often in conflict
with the notion of respecting differences that comes with faith. Through the works
presented, the M1 Singapore Fringe Festival 2012 invites all to examine how art and faith
can come together despite their seeming irreconcilability.

There will be 17 works from 11 countries, including four Festival Highlights from Singapore, Hong Kong, Burma and Iraq. With 28 live ticketed performances, including Cane, a performance art by Loo Zihan, a One Night Only performance, is a re-enactment of the infamous 1993, Brother Cane by Josef Ng.

There will also be 6 visual artworks by international and local artists including, Alecia Neo’s Goddess of Mercy. The M1 Singapore Fringe Festival 2012 will be held at Esplanade – Theatres on the Bay, National Museum of Singapore, The Substation and ION Orchard.

Tickets are on sale now and unfortunately the performance which we wanted to catch sold out before it was even a week out in the news. Cane by Loo Zihan sold out it’s second batch of tickets on Friday, 21st October 2011. We hope the organisers will consider staging another show.

But good news for those who has your eyes on other performances. Enjoy Early Bird Discounts for Tickets to the M1 Singapore Fringe Festival 2012: Art & Faith! So what are you waiting for? Get your ticket today. 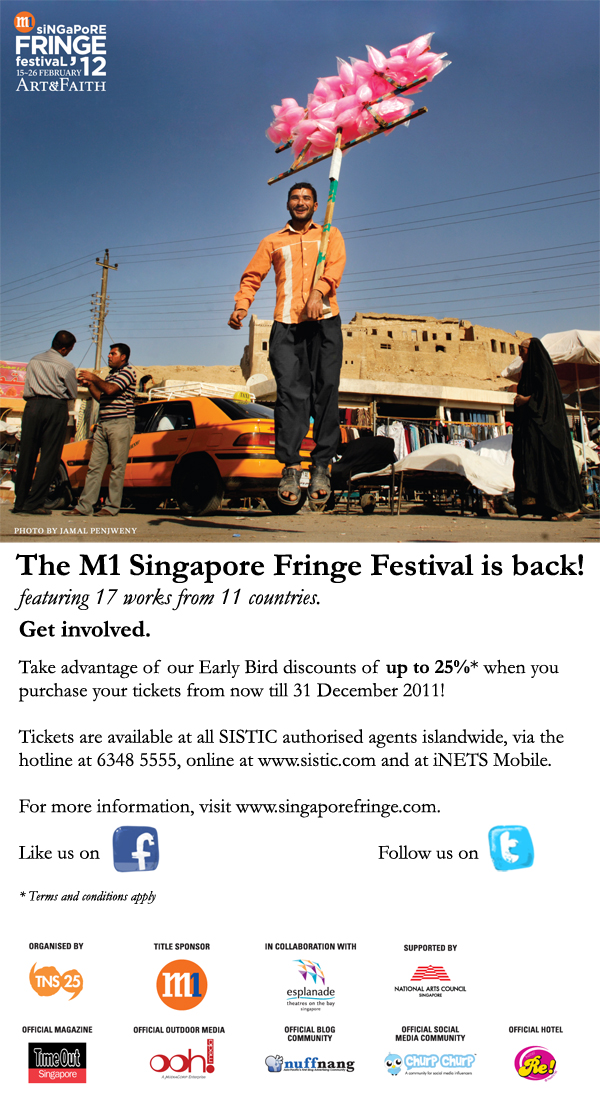