Read about what our writer experienced during the media preview of CITY OF DESIRE as he participated in the characters in Baratham’s stories as they converge for a night of sensual music, dance and words – Chee Wei teck reports

“The City Of Desire”is a performance inspired by short stories from Gopal Baratham’s book, The City of Forgetting.

Being part of The Singapore Writers Festival (SWF) ‘s Fringe component for the first time. Held at The Arts House, it aims to explore “The Origins of Desire”. The SWF Fringe seeks to examine the different facets of desire in the literary arts, and the manifestation of sexuality in books, films, performances and the visual arts. The fringe programmes will explore the historical as well as socio-cultural significance of desire and sexuality in literature. 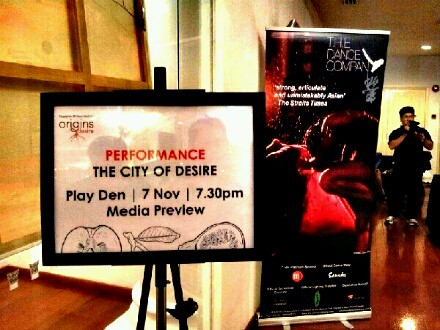 During the media preview, I was invited to join the characters in Baratham’s stories as they converge in the City of Desire for a night of sensual music, dance and words, The familiar story of human searching unendingly for love and physical intimacy, these fragile yet resilient, assured yet confused characters weave dance and text in a performance that distills the essence of love and sex through the characters’ eyes.

My advise is to have your caffeine fix before the show, because you would need to keep yourself alert inorder to listen carefully to the recital during the performance. This is a vital part of the performance’s structure and storyline. The recital indirectly pays tribute to the book that inspired it.

I enjoyed the fluid movement of the performers, with primeval touch. Emitting the feelings and actions based on primitive instinct; raw and elementary. Showing of human’s primeval desire. Personally I would like to see the performance start off with a more elaborate & refined attire on the performers, to reflect the orderly surface of human civilization before stripping down to the primitive form. Call me a snob, but I like a performance with textures, with more complex layers.

There are religious references to the consumption of the flesh or body of god. Such verses in religious texts hold multiple meanings; I would leave that to the audiences to decipher. Basically, this is a performance about the Human body as the receptor of desire, but by feeding it with desire. Are we eating away our soul or robbing ourselves of the good we seek in religion? That is why I mentioned that the performance lacks an contradictory element , to invoke more contemplating about the subject of “Human’s desire”.

It’s good to see the youth training wing of “T.H.E Dance Company” – “T.H.E Second Company” in action. And interesting to know of the involvement of Timbre Music Academy (TMA), a music school that offers formal and practical music here. With Art Schools taking a more active role in pushing their students to go further & shine on a bigger stage, this is definitely good news for the Singapore performance art scene.

Special SWF Origins of Desire cocktails will be sold before each performance.
*Post performance dialogue on 9 Nov.
Advisory: Fringe programmes are suitable for SWF Festival Pass holders aged 21 years and above.