The M1 Singapore Fringe Festival 2016 drew to its close this weekend. Here is what Artitute's writers Reena Devi and Alex Foo have to say about two of the performances that they saw over the weekend.
Tweet

BI(CARA) by Pink Gajah Theatre (Singapore) is essentially a study of what makes us animal and human. Through multiple narratives comprising of monologues and powerful bodywork by Sharda Harrsion, the audience finds themselves facing the blurred lines between these two distinctive worlds. 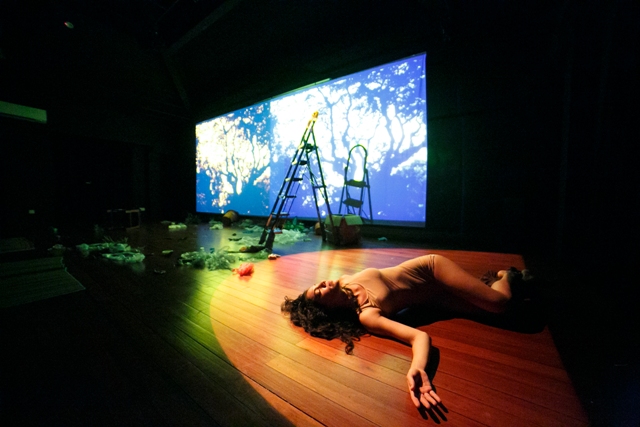 The play reminds us that we are as much a part of any prey-predator relationship as any animal we come across – eat or be eaten, kill or be killed. We too, like the animals we kill and consume, are ruled by fear and threat when faced with a dangerous cobra, or when we want to save the pets we love or when confronting the breakdown of a relationship. The last storyline is one of the more unsettling and impacting performances in BI(CARA). Sharda Harrison proves her acting dexterity in taking on a personality of a middle-aged Indian zookeeper who has a far more loving and attentive relationship with his orangutans than his own wife whom he talks about with bitterness and anger bordering on mania. This dichotomy comes to a head when the audience witnesses the zookeeper being called an animal by his wife and then later confessing to the audience that the only real moment of love he experienced in his entire life was when a Sumatran orangutan looked into his eyes and reached out her hand for his through her cage. At this point these questions come to mind – Who is the animal? Who is the human? Which one of us is really caged? A montage of aggression and suffering inflicted by humans on each other emphasize this question.

The play offers temporary solace to the tensions of the aforementioned dichotomy through music and dance that reflects shamanism and spirituality, especially in its conclusion. Sharda’s delivery when she is portraying herself also offers comic relief especially when she refers to her own family, including her brother and her father who is the former Director of the Singapore Zoo, making the play feel even more personal and intimate.

Bitch: The Origin of the Female Species

Bitch: The Origin of the Female Species is one of those plays with such a richly allusive script of such staggering breadth that to try to encapsulate every discursive point broached would be a futile attempt. Thankfully, it is also not one of those plays that buckle under its theoretical weight, but rather, tucks the extensive research under its wings and soars to new creative heights. In this immaculately conceived and impressively directed production, Edith Podesta broadly deals with themes of power relations in a patriarchy (how men define themselves singularly whereas women and dogs are always defined in relation to men), Man’s long friendship with dogs and language as both power and a barrier. 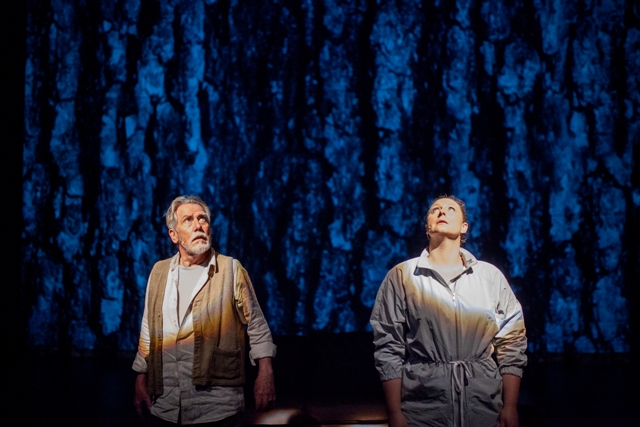 Bitch‘s success lies in how the conceptual is situated and anchored within the private tragedy of a man (Helmut Bakaitis) whose wife is afflicted with dementia, and who later suffers from a debilitating stroke, such that the feminist diatribe does not appear excessively academic, or to use one of Podesta’s puns, dogmatic. You would think that any parallelism drawn between speciesism and sexism would border on tenuous, but Podesta’s poetic script rendered the similarities of their powerless, domesticated state quite masterfully, amplified by the acute visual apotheosis of a woman’s face overlaid over a dog’s. Interestingly, there is a scene where she, playing the sentient bitch, retells (his)tory with a guilty Adam whilst exploring Man’s fluid, atavistic identities, dangling the preternatural provocation that the origin of the female species may just be the palindromic opposite of God.

A large round of applause must be given to the superlative technical team, with Adrian Tan’s sensitive lighting, Teo Wee Boon’s atmospheric but not prescriptive soundtrack and Brian Gothong Tan’s lavish multimedia that ranged from a mimetic, mirrored triptych of a man, woman and dog to CT scans and the infinite cosmos. We escape the confines of this ostensibly simple and domestic set (a black couch flanked by two side tables) through projected visuals that concretize the abstractions in the poetic text as we traverse the man’s childhood and the universe of the owner’s mind. I must say it was slightly strange reconciling Podesta’s orotund dog persona with the miniature white schnauzer, but as the play ends, as it started, with the man brushing his dog’s fur, we come to understand that she/it is ultimately a surrogate caretaker for both the ailing husband and wife, and we ponder – how is it that the lovable man’s best friend had fallen from grace to become such a sexist insult today?