Hailed as her best-known comedic work, ART by French playwright Yasmina Reza is a woman’s keen observation of the complexities of friendship between men. This play has also won numerous awards in London and New York. Created by the team behind ‘Who’s Afraid of Virginia Woolf?’ (Huayi 2012) and ‘Twelve Angry Men’ (Huayi 2013), and directed by Nelson Chia from Nine Years Theatre, ART was a sold out success at the Esplanade Theatre. 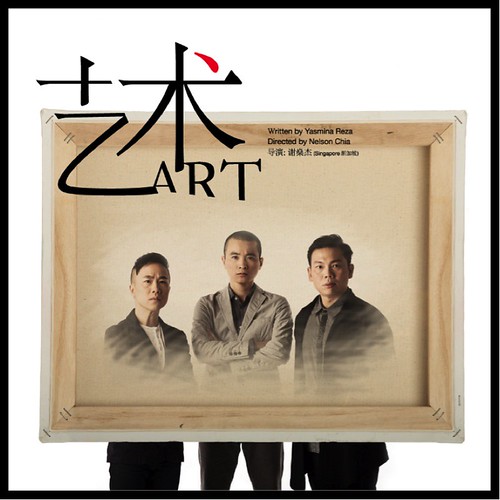 Hailed as her best-known comedic work, ART by French playwright Yasmina Reza is a woman’s keen observation of the complexities of friendship between men. This play has also won numerous awards in London and New York.

Created by the team behind ‘Who’s Afraid of Virginia Woolf?’ (Huayi 2012) and ‘Twelve Angry Men’ (Huayi 2013), and directed by Nelson Chia, this production gathers three of the most acclaimed male actors from the Singapore Mandarin theatre scene – Oliver Chong (钟达成), Peter Sau (苏佳亮) and Liu Xiaoyi (刘晓义), in this humorous and poignant performance. They are also director Chia’s ‘dream casts’. Chia has always wanted to work with them, and this time, the casts came before the decided script, and they fit perfectly into their characters. 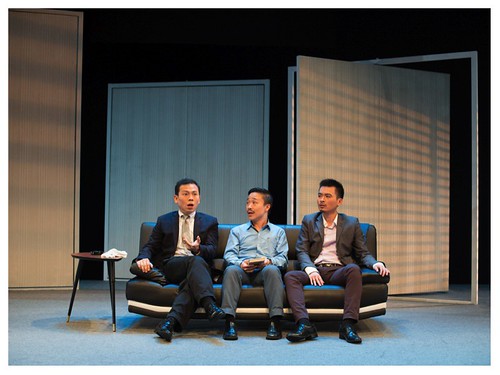 The synopsis:
Bosom buddies for the past 15 years, Serge, Marc and Yvan’s friendship is put to the test when Serge decides to pay a ridiculously high price for a modern painting – a white canvas with a few faint, white lines. Tension ensues when Marc calls the painting “a piece of white shit” and Serge decides to defend it stubbornly. Their differences in taste quickly degenerates into a relentless attack on each other’s failures in life. The absurdity of the situation escalates when Yvan, who is caught in the middle, vacillates between Serge and Marc as he tries to save the deteriorating friendship.

The three characters held within themselves very different background and belief, and yet they have been friends for 15 years. Both Sau’s and Liu’s characters of Marc and Serge demonstrate a strong stubbornness and insecurity in their search to be better than each other, but at the same time, needing the assurance and confirmation from each other. They seem to be very alike, but their individual success and failure in life separates this closeness. Chong’s character of Yvan, on the other hand, is always trying hard to lighten everyone’s problem and be Mr Good. His weakness is emphasize, by his two friends, who do not realize that behind the joker’s optimism in everything in life, Yvan is suffering silently alone.

In the seriousness of the matter that the friendship among the three men may be jeopardize by a painting, the humour never cease to lighten the mood, or up the argument to a notch. Audiences are tickled by the actors’ superb expression that are so natural that you forgot you are watching a play. All three actors display full confidence in delivering their characters, totally engaging the audience in the short one and a half hours’ performance. No one is better than anyone, as they compliment one another’s character seamlessly. I fell in love with the lines of the entire play, they are like music to the ears delivered by the actors, even the parts where they are furiously arguing. 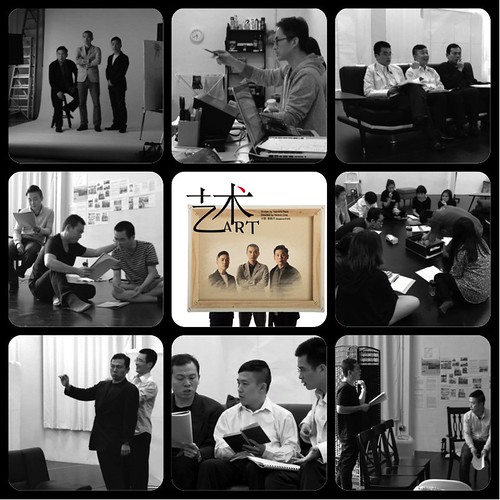 Nine Years Theatre’s production is always packaged with little surprises to be discovered here and there. In ‘Who’s Afraid of Virginia Woolf?’, we were treated to the delicately-built set by Wong Chee Wai and lighting design by Lim Woan Wen; In ‘Twelve Angry Men’, the sound of the rotating fan filled up the heated jury room, the rain, accompanied by occasional thunder, cooled the exterior of the nicely crafted set; In ‘An Enemy of the People’, the open-stage concept treated the audience to the experience of actors’ existence from on-stage to off-stage. In ‘ART’, besides the three main casts, the live piano performance by Darren Ng has to take cue and act with script too. With a theatre company that takes heart into such details for their production, the audience has the privilege to better enjoy the performance, and truly supporting the theatre scene.

Chia took nine years to set up Nine Years Theatre, and the productions they have delivered so far have been a perfect 10! They rise at a time when the Singapore theatre scene is in need of quality and sincere performances. We are glad that they have provided answers to Singapore’s Mandarin theatre. Looking forward to more from Nine Years Theatre.

All shows were sold out.