Commemorates the Three Years anniversary of the World Expo Shanghai and presents China artist, Angeliqúe Shidi’s works at the Power Station of Art in Shanghai.

After indulging in a long weekend of China’s national holiday (Labour Day), the Power Station of Art held a grand opening ceremony of Celestial Water Carrying No Boundary Five Continents Sharing One Origin 天水无居·五洲同源 by China artist, Angeliqúe Shidi ( 诗迪 ). It is an exhibition commemorating the Three Years anniversary of the World Expo Shanghai and a presentation of the artist’s works at the Power Station of Art in Shanghai. The opening event was a grand ceremony which many well known Chinese politicians and figures came to support the artist. 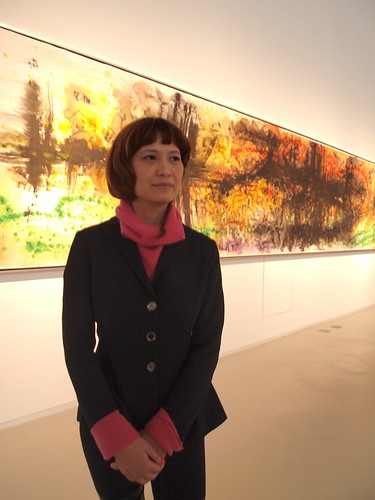 With a strong and passionate personality, the collection of artworks at the Celestial Water Carrying No Boundary Five Continents Sharing One Origin 天水无居·五洲同源 reflects the artist’s connection with nature and gems. Bold strokes and strong colours dominates the artist’s body of works. And as you enter into the gallery at the Power Station of Art, a digital video of vibrant colours and water greets you at the entrance. 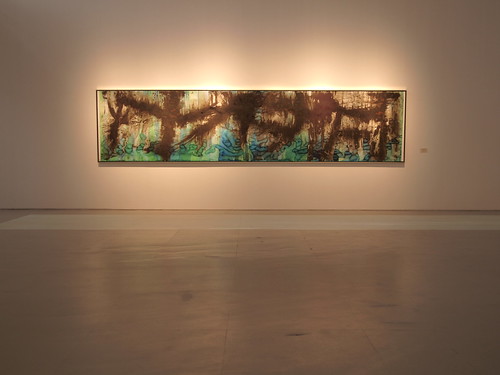 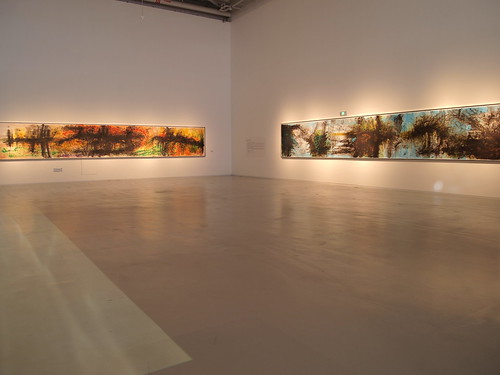 Among many of her works, three 10 meter long painting, reflects the natural element of mother nature, flowing rivers, falling flowers, dawn and dusk. Video reflections of ripples and waves of water mirror the element under each artwork.

“Long scrolls unveil one after another, dotted, lined, splattered and permeated with different shades of ink, an embodiment of waters in Jiangnan.
The gems and crystals descend like twinkling stars, far and near, old and new, in the vastness of space and the immensity of time.
And the soul? The soul is flying in a non-linear chaos. – Ye Weiping”

A trained gemologist, the artist incorporates rich hues of colours on each artworks that are inspired by precious jewels. And as a die hard romantic, Angeliqúe Shidi’s artworks are full of passion and philosophy. Strong splashes of bold and vibrant colours flows like silk on the naked skin. Like the couplet by Chinese poet, Yang Wanli 楊萬里(1127–1206): “Emerald leaves stretch boundless to the horizon, and lotuses look peerlessly rosy in the sun.” 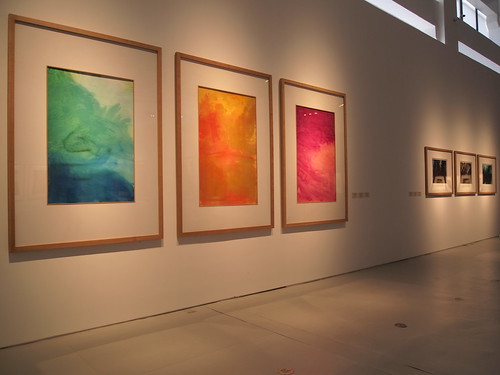 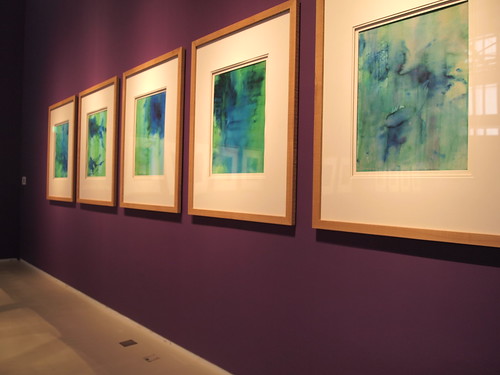 The exhibition breaks into three parts –

1) Homage to Dwelling in the Fuchun Mountains showcase the picturesque landscapes of Jiangnan, the lower reach of the Yangtze River, where hills surround rivers and rivers encircles the hills. As the artist’s birth place, she dedicates Dwelling in the Fuchun Mountains to memories of one of Song Dynasty‘s Four Masters of the Yuan Dynasty. Huang Gongwang and the artist’s manifestation of her own mind.

2) Memories of the Five Continents dedicates to the 2010 World Expo Shanghai, held along the Huangpu River and the transformation of the building now known as the Power Station of Art, which is now literally the powerhouse of cultural energy that propels China’s social development.

3) Meditating the Cosmos echos the artist’s personal journey with gemstones as a gemologist. Rubies, sapphires, diamonds and so on…gemstones emerge from the lands and oceans all over world and relive the dreams back in time. They crystallize the myth of the universe and the history of the Earth. While the rain and mist of Jiangnan accompany her on the journeys to the Seine, the Rhine, and the Alps… The Jiangnan waters merge into the waves of the Pacific, Atlantic and the Mediterranean.

About the artist
Born on the shores of Fuchun River in Zhejiang, Angeliqúe Shidi travelled abroad as a child and has stayed in Hong Kong and Paris for many years. Trained as a gemologist, the artist was exposed to luxury and glamour. But the spirit of her birth place inspired her to become an artist hence she became an apprentice under China’s great master and studied at China Academy of Art.

Honoring her roots as a Chinese artist and her exposure in Paris, the artist combines East with West, using acrylic on Chinese rice paper, reflecting the traditional Chinese art – 山水画.

In 2010, Shidi was a staff member for World Expo Shanghai. Now after three years since the Expo, this exhibition also commemorates the dedications and services of the Expo staffs