A figure like Anthony Poon needs little introduction. With a productive career spanning three decades, this second-generation Singaporean artist is best known for his Wave series and sculptural commissions, which range from the St. Regis Singapore to the Beijing Olympics. Now on display at the Sundaram Tagore Gallery is a broad overview of Poon’s oeuvre, showcasing shaped canvases completed early in his career, the Frequency and Wave series and most fascinatingly, his preparatory sketches and maquettes, allowing us to peer past the unspeaking matte surfaces of his canvases into his assiduous working process.

Compared to his coevals in the 1970s (Teo Eng Seng and Goh Beng Kwan to name a few), Anthony Poon’s works stand out very distinctly for their post-painterly aesthetic and conceptual matter. There are no hints of brushstrokes or anything revealing about the process of painting, nor is there any local subject matter. First trained under the tutelage of Cheong Soo Pieng at the Nanyang Academy of Fine Arts and later at the Bynam Shaw School of Art in London and at the Bradford Regional School of Art, Poon proved to be highly articulate in the international geometric abstractionist style and remarkably consistent in his pursuit of hard-edged abstraction. 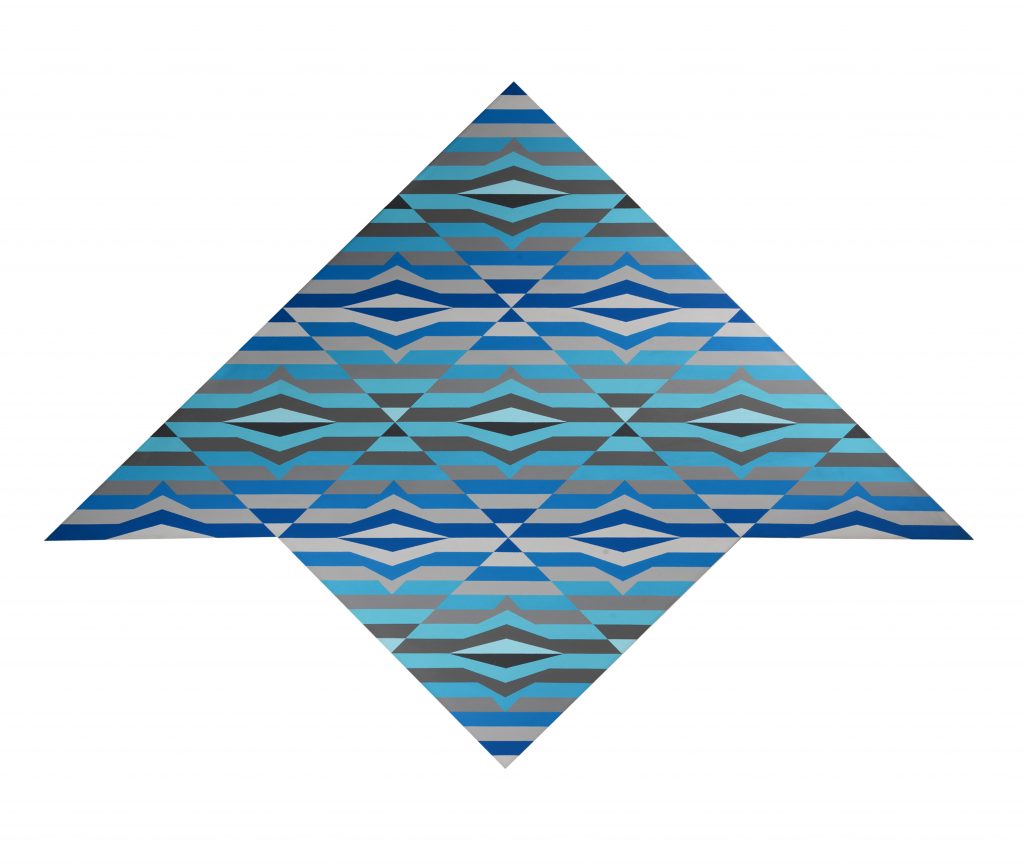 From the beginnings of his career, Poon’s working method was systematic, meticulous and unvarying, operating in phases from sketch to maquette to canvas. We see how he plans the shape of his canvas to scale and the ordered symmetry of the lines within on graphing paper, while assigning individual colors to each sharply delineated space. Poon’s fastidious attention to the technical aspects of his art would remain a constant throughout his career, later evidenced by how he titled paintings in his Wave series by codes used in acrylic paint color charts. Poon was very clear on the kind of optical effects he wanted in his work, where he writes in a sketch how he intends for the “three standing squares” tilted sideways “to form a rhythm like moving wheels” and the use of a “square to enlarge the in-between like a microscope enlarging the in-between movements”.

Emerging from the austere rigor of his shaped canvas paintings in the 1970s is a softer, more fluid sensibility that extends from the 1980s to the 1990s. His interest in color widens into the expanse of color field theory. Here, the undulating frequency wave – his eventual signature visual – sweeps across his canvases in both two and three-dimensional form. With his flat Frequency series, symmetry now exists as a looser concept as Poon deploys ombré such that certain shapes appear to advance while others recede, conveying spatial depth while preserving a lyrical tonal harmony. What he produces is not plain repetition, for this is repetition with a difference, and no two waves are the same. 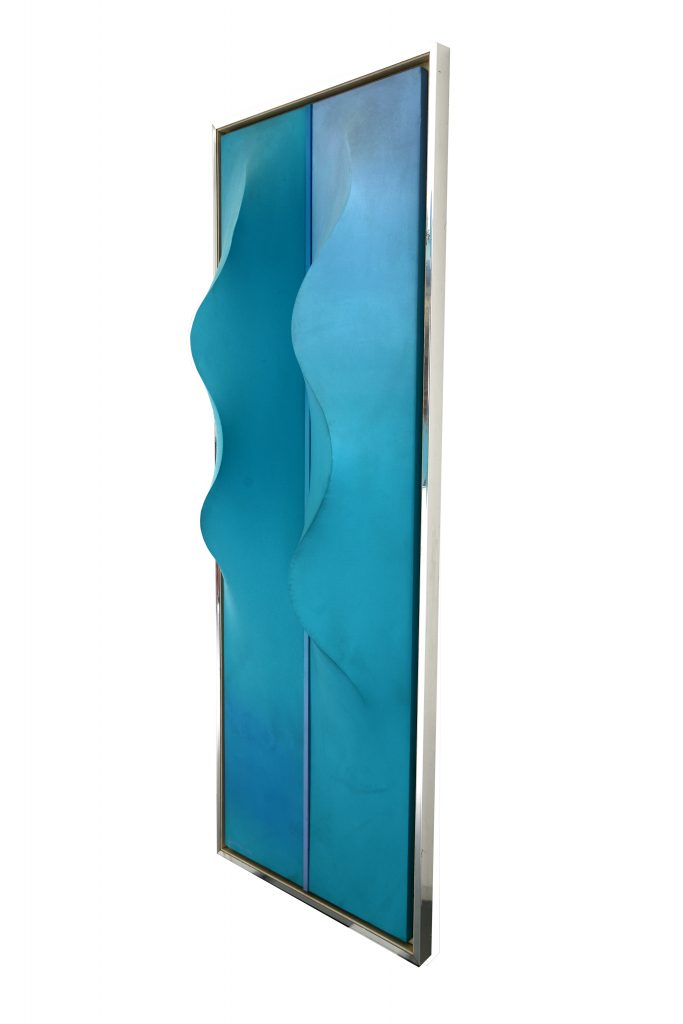 For his Frequency series, perhaps Rothko’s advice to appreciate his works 18 inches away from the canvas might come in handy. But for the Wave series, experiencing it from far and walking around it, as you would a sculpture, might prove more instructive in appreciating the movement inherent in this series. When looked at frontally, the eye not only looks at the painting’s general composition, but also traces the curved armature visually. Tactility is felt in his relief paintings, almost as if you want to feel the fold of the canvas over the aluminum strips beneath. Within these raised contours that break the fourth wall reside an immanent sensuality, its spatial depth enhanced by both the light (and its attendant shadows) and the gradated tonal symphony. 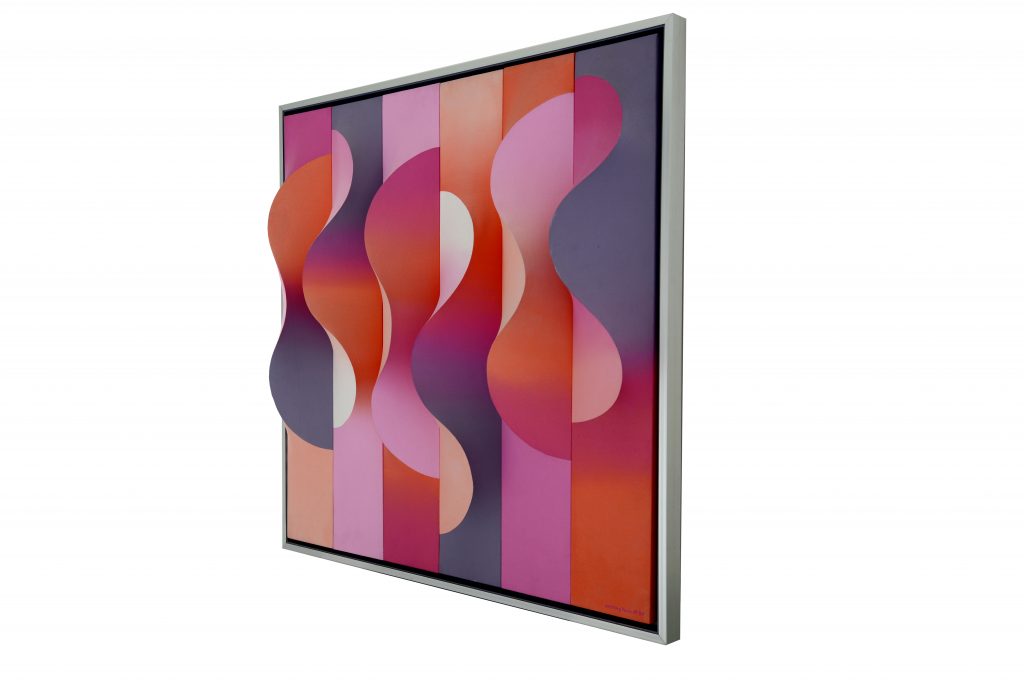 From this formal inventiveness in painting, it only made sense that his next step would be to embrace the truly three-dimensional form of sculpture. Poon’s obsession with color now takes a backseat, as the three mono-colored sculptures on view now explore space instead, where lithe planes of steel and bronze cavort, duck beneath one another, and fuse. I would have liked it if there was some sense of chronology in the exhibition, or at least to see paintings of the same series displayed beside each other, to get a fuller sense of how Poon continually toyed with issues of form and color. Regardless, there is a real sense of the maturation of his style, as Poon takes his works from 2D to 3D, from flat to fold. 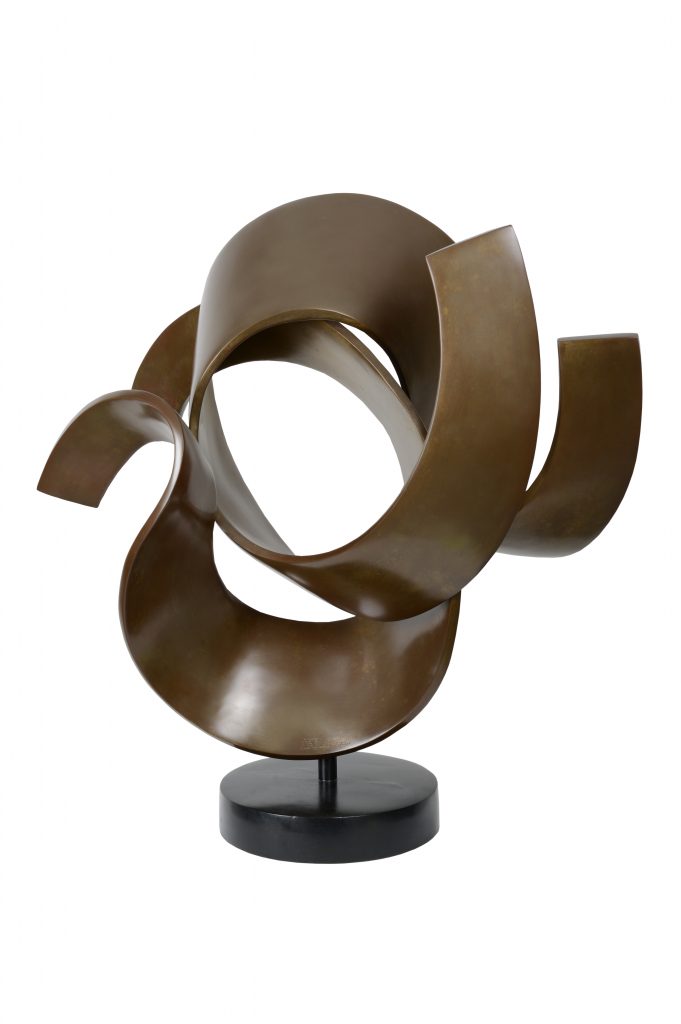 “I would like to end my life with a paint brush in my hand.” This was an artist with such clarity of vision, so keenly focused on the expression of and relationship between line, form and color that he fashioned a new painterly idiom so unlike anything else in Singapore in the 1970s. In this light, no one is more deserving of the epithet ‘pioneer of Singapore abstraction’ than Anthony Poon, and this exhibition is a fitting testament to that.