Colleen Quigley is a Japanese American artist whose recent work includes encaustic painting and digital collage, as well as, printmaking and painting on clay. Her works are now part of a group exhibition in XVA Gallery in Dubai. Ends 13 March 2014

Imagine wandering leisurely through a neighbourhood curiosity shop. ‘Curiouser & Curiouser’ now showing at XVA Gallery will intrigue and captivate you with a melange of eclectic miniature art pieces. Individual works take off on flights of fancy, assuming an otherworldly air; their delightful, whimsical quality is sure to charm and beguile viewers. These petite, enigmatic pictures and sculptures with their surreal tales of the absurdities of life will fill the viewer with wonder and at the same time pique one’s curiosity with their open-ended resolutions.

Colleen Quigley is a Japanese American artist whose recent work includes encaustic painting and digital collage, as well as, printmaking and painting on clay.

For Curiouser & Curiouser, Quigley created site specific pieces that draw upon images from popular culture, vintage Arabic engravings, Japanese Anime, Islamic design, fashion and art historical images juxtaposing or mixing them to produce collaged artworks that speak of the encounters between tradition and modernity; the impact of global influences, presenting new interpretations and fictions to the viewer.

Using ceramic oxides and stains, Quigley prints on ceramics with a method similar to lithography. It takes her many weeks to produce a piece: It is first subjected to a bisque firing which she then glazes before firing it again, all the time taking care not to warp it. A romantic and wistful example of this method can be seen in ‘Dreaming of the Stars’, a subtle work that hints of the aurora borealis. 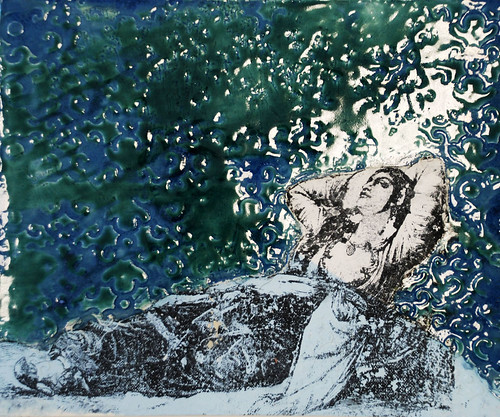 Dreaming of the Stars

In ‘The Exquisite Corpse’, Quigley utilises encaustic, a process involving the use of heated beeswax to which pigments and damar resin are added and applied to a hardboard surface and then fused into a uniform enamel-like finish. The word encaustic originates from Greek and means “to burn in”. The method is thousands of years old: The Fayum funeral portraits from Greco-Roman Egypt are an enduring example of encaustic. It has been employed by artists Diego Rivera, Picasso, and Jasper Johns, as well as 21st century contemporary artists. Three dimensional and subtle atmospheric effects can be crafted by a manipulation of the process. Images must be applied one stroke and one layer at a time as the hot wax hardens quickly once the heat source is removed. Quigley’s unique technique is an intensive additive and subtractive process; she fuses, scrapes, pours, burnishes, to create a painterly and luminous surface on her artworks. 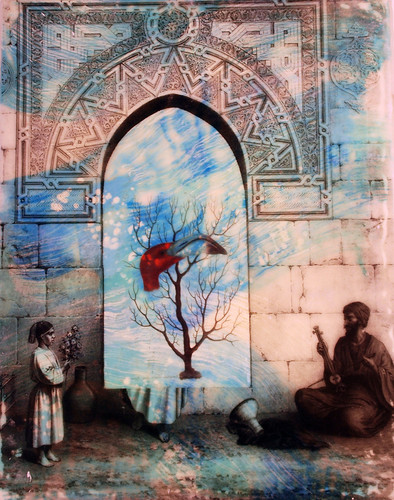 In “Easy Rider”, “Object of Desire” and “Between Two Worlds”, Quigley invites reflection on the influences of globalisation on conspicuous consumption, collaging sections of centuries old Arabic prints with luxury objects. “The Impermanence of Being” and “The Sinking Vessel of Affection” speak about the transience of life and how we hold on to memories of things we hold dear to us. 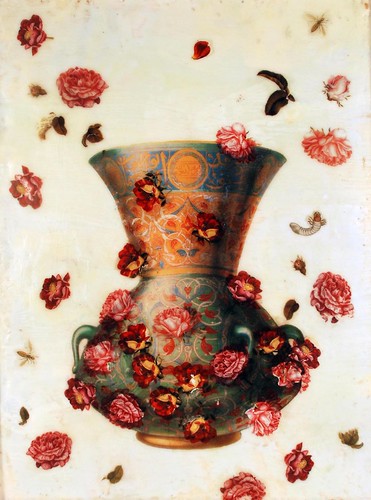 The Sinking Vessel of Affection

Quigley’s works are a labour of love. In ‘Patience is Beautiful’ which is also an Arabic proverb, she has embedded ceramic tiles, over which she has layered a decal, in wax. It is a poetic and charming tribute to her process that takes much patience and time.

Colleen Quigley received her BFA in Sculpture from the University of the Arts in Philadelphia, Pa., U.S.A. and MFA from Tokyo National University of Fine Arts and Music, in Tokyo, Japan where she focused on contemporary Japanese printmaking. She also attended the New York Academy of Art Graduate Program in Figurative Studies in Painting. She is the recipient of the Japanese Monbusho Research and Yoneyama Memorial Foundation Scholarships. Her interests include subjectivity and the body, migration, representation, popular culture and cultural identity. Her work includes painting, sculpture/installation and encaustic collage. She has exhibited in Italy, Japan, the United States and the U.A.E. Her current research interests include post-modern strategies of art making in relation to themes of originality, art history, and memory.

The other featured artists are:

Jakob Roepke is a German artist who resides in Berlin. He studied art at the Hochschule fuer Gestaltung Offebach. He has been working on his small-sized collage paintings since 1996. He exhibited with XVA in their summer group exhibition entitled ‘Some Like it Hot’ in 2013 and has also had solo shows in several European capital cities.

Halona Hilbertz was born in Austin, Texas to German parents and was raised in Germany. She studied painting and performance art at the Hochshule der Bildenden Kuenste Saar, Saarbruecken Germany and at the Nova Scotia College of Art and Design Halifax. She currently resides in Brooklyn where she works on her three-dimensional collages and plays in the rock band, FETZIG. She has previously exhibited with XVA Gallery in a group exhibition as well as having exhibited extensively in the United States and Europe.

About the XVA Gallery:
Established in 2003, XVA is one of the leading galleries in the Middle East that specializes in contemporary art from the Arab world, Iran and the Subcontinent. Exhibitions focus on works by the regions foremost artists as well as those emerging onto the scene. The gallery’s artists express their different cultural identities and perspectives while challenging the viewer to drop prejudices and borders. XVA Gallery exhibits both locally and internationally; collaborating with galleries and participating in international art fairs, such as Art London, SH Contemporary and Art Basel Hong Kong in order to further expose Middle Eastern contemporary art.

XVA Gallery and XVA Art Hotel are located in Dubai’s heritage district, now called Al Fahidi Historical Neighborhood. XVA founded and organized the Bastakiya Art Fair from 2007- 2010 as part of its commitment to raising the profile of contemporary art practice in Dubai. The XVA Art Hotel serves as an annex gallery for curated exhibitions and participates in the Sikka Art Fair.

Opening hours:
7 days a week: 10am – 6pm.
And by appointment outside of working hours.