Yayoi Kusama is without doubt one of Japan’s most famous artists. Her obsessive nature of covering canvases, sculptures and ordinary household objects with polka dots and infinity nets has now become her trademark. 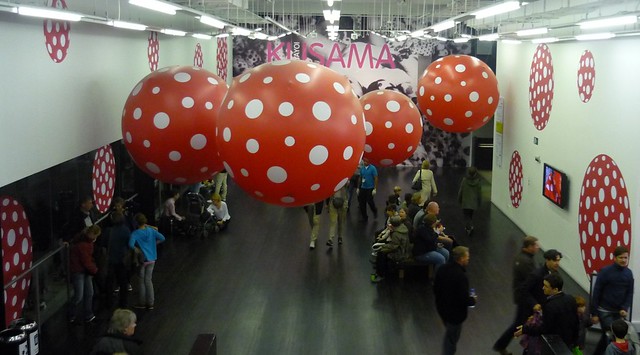 After going up what seemed like an endless series of escalators, I knew I was on the right floor of the Tate Modern when I was greeted by large red polka dotted spheres which were suspended from the ceiling.

Yayoi Kusama is without doubt one of Japan’s most famous artists. Her obsessive nature of covering canvases, sculptures and ordinary household objects with polka dots and infinity nets has now become her trademark. Her artwork has been, in her own words: “An attempt to exorcise her hallucinations from which she has been prone to suffer since early childhood.”
With such a great artist, whose career has spanned so many years, it is obvious that the exhibition could only show a small selection of her works thus leaving out many crowd pleasers such as her trademark pumpkins.

The exhibition begins with her work from the 1950’s as almost all her art from the 1940’s was destroyed by her mother upon her departure from Japan. Personally, I have always found these pieces rather lonely, dark and depressing. This may be partly due to the dark palate of colours in which she chose to create these pieces during this period. 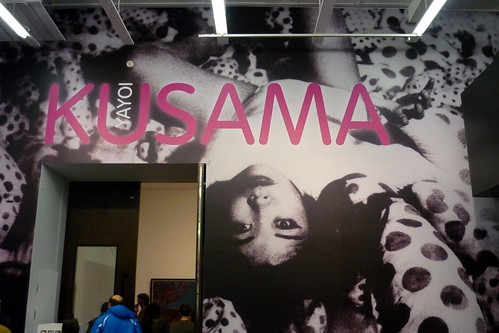 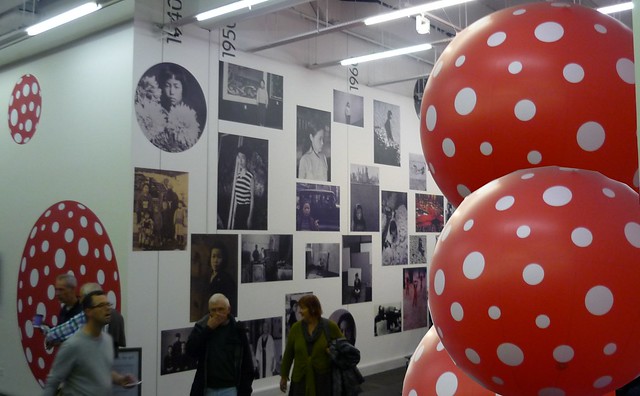 After this period we move to her first infinity nets which were created with oil paint which have started to yellow with age. The yellowing seems to lessen the effect and sheer brilliance of these pieces compared to her more recent nets pieces which are created with acrylic paint.

Next we move onto to her famous “Accumulation Sculptures” and “Compulsion Furniture” works, the phallic protuberances highlighting her fear of men and sexual relations with the macaroni art perhaps representing her observations on the overabundance of food in America.

The exhibition also highlights Yayoi Kusama’s close relationship with Pop-Art seen in her use of repeated motifs to line the gallery walls which predates Andy Warhol’s “Cow Wallpaper” by three years. Other rooms included her psychedelic videos from the “flower power” sixties era, her lesser known sticker and stamps series from the 1960’s and collages from the 1970’s and her soft sculptural work.

The last room contained, what was for me the highlight of the exhibition, the Infinity Mirrored Room installation. This darkened room is covered with mirrors and dimly lit with a multitude of small coloured lights, the effect is nothing short of magical, transferring me back to a time when I was a small child staring mesmerized at the lights on the Christmas tree. Back then, everything was possible, magical, unknown and full of possibilities. Perhaps, that is what the world of Yayoi Kusama is about, a magical journey into infinity! 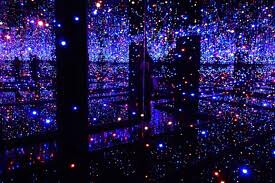 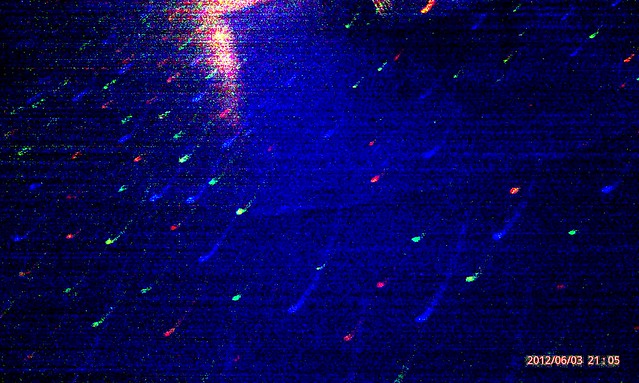 Click here for more photos of Kusama – A Journey into Infinity.