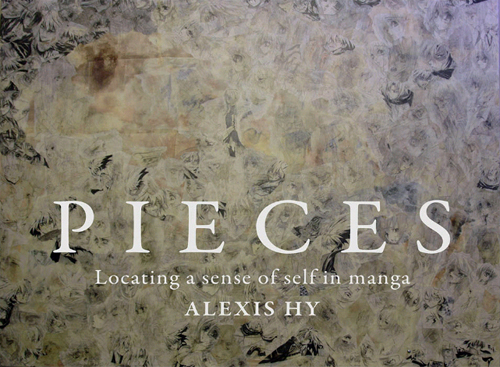 Presented by Japan Creative Centre, supported by Studio Miu, Pieces – Locating a sense of self in Manga is and art exhibition by Manga-Centric Contemporary Artist Alexis HY.

The last I checked and confirmed, Alexis is not a Manga artist and she told me personally that she is not one, at least not at the moment, not yet. She is, however, as she termed it, a Manga-Centric Contemporary Artist.

This exhibition showcased three sets of artworks by Alexis, featuring different medium, but all three sets of works reflect her experience, exploration and journey, as she goes in search, to locate a sense of self. All revolves around the realm of Manga. 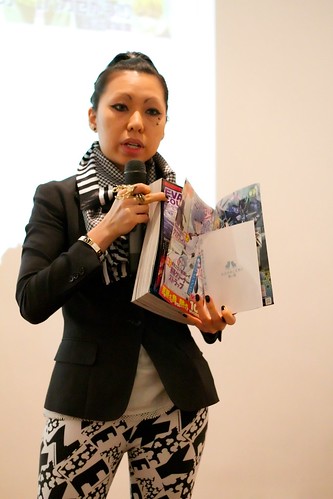 Alexis giving a talk on the Manga Art and Culture. 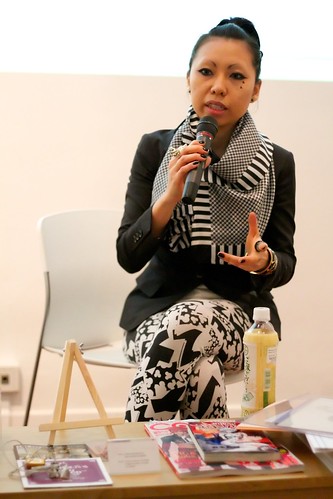 Alexis sharing with the audiences the influence of Manga in her art-making.

Manga (漫画) are comics created in Japan, or by Japanese creators in the Japanese language, conforming to a style developed in Japan in the late 19th century. They have a long, complex pre-history in earlier Japanese art. Even though it is a Japanese creation and presented in Japanese, with the wide popularity, translations in many different languages are available, in print and online. The Manga culture is not only influential in Japan, but internationally. Manga Art, however, is definitely unique to Japan. The style is a language on its own, from the raw, basic hand-drawn creation of Astro Boy by Osamu Tezuka, to the modern and futuristic content-filled storyline in many latest titles, readers are exposed to not just the art, but the vast topics and themes available in the Manga world. In fact, Manga artists do detailed and intense research on the topics they are drawing / writing, from the characters, to the scenery. Reading some of the titles will give you insights to facts and truths of what you did not know.

Reading Manga can be a hobby, an inspiration, and even an addiction. That is why you have Manga fans as well. As Alexis shared in the interview, she is a Manga fan herself. She started at her early years of primary school where she read the cute and resourceful Doraemon (ドラえもん), created by Fujiko F. She then went on to read titles in the Seinen category. The Japanese use different kanji for two closely allied meanings of “seinen”—青年 for “youth, young man” and 成年 for “adult, majority”—the second referring to sexually overt manga aimed at grown men and also called seijin (“adult” 成人) manga. The few that made a deep impression for her were 3×3 Eyes (pronounced Sazan Eyes in Japanese), a manga created by acclaimed manga artist Yuzo Takada, and Battle Angel Alita, (known in Japan as Gunnm 銃夢), created by Yukito Kishiro. The content and category may not be labelled as suitable for Alexis during her age during then, she however, finds the story-telling style and the social issues mentioned greatly intrigue her. In her words, it helped her open her mind in the area of creativity. Her present favourite is Hunter × Hunter (ハンター×ハンター Hantā Hantā), written and illustrated by Yoshihiro Togashi. 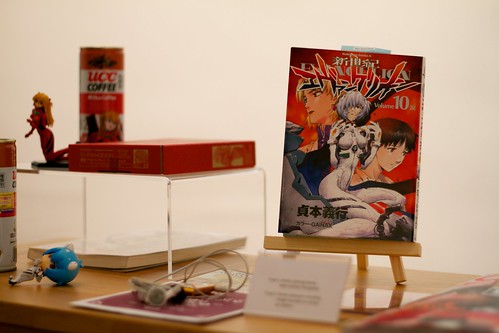 The varieties of merchandise within the Manga culture 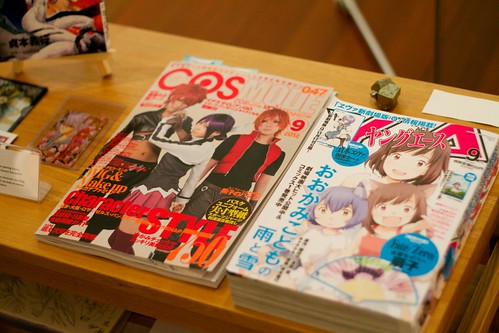 Having heard Alexis’ sharing on her knowledge of Manga, and about the ones she has read and liked, one may think that there may be a manga work that is an inspiration for her artwork. There is not one. It is not really which manga piece that became an inspiration for her art, but more of how she has already lived in the Manga world that it has become part of her work. The identity she is locating, the sense of self, is presented between two entities – Manga Fan, and the Artist. She is hoping to step out of the Manga Fan entity more as she embarks onto her Artist entity now.

In the three sets of works presented, there are three types of mediums: Cotton Duck, Wood, and Mixed-Media.

Cotton duck diary-in-progress is a series of works in progress. A total of 7 works are planned, representing 7 odd-number months between November 2011 and November 2012. For this exhibition, 5 pieces (November 2011, January 2012, March 2012, May 2012 and July 2012) are displayed. They follow the emotional, self-searching journey of Alexis from a time of self-doubt to a period of increased confidence as an artist. Through this series, she expresses the dynamic energy of popular manga culture and identifies herself as a fan who shares a similar cultural vocabulary with other manga fans.

The use of the cotton duck medium comes from Alexis’s desire to reconcile the act of drawing manga characters, which she has been practicing before becoming an artist, with the need for new creative accomplishment. As a medium, cotton duck has the potential to bring out the beauty of manga on a large scale and as a unique piece of artwork. It is flexible enough to express both dynamic black-and-white (off-white, in this case) contrast and nuanced tonal effects similar to the screentones used in manga to convey soft moods. Most importantly for Alexis, it preserves the act of drawing – the basic skill of manga – and, as it has a rough surface that is relatively difficult to draw on, the sharpening of focus.

The growth process of cotton duck diary can be appreciated during Alexis’s residency showcase at Studio Miu Art in December 2012, in which the entire series will be on display and further worked upon in studio. 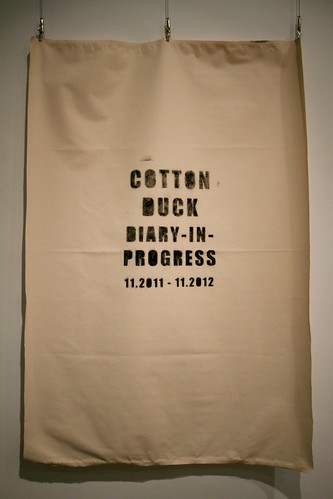 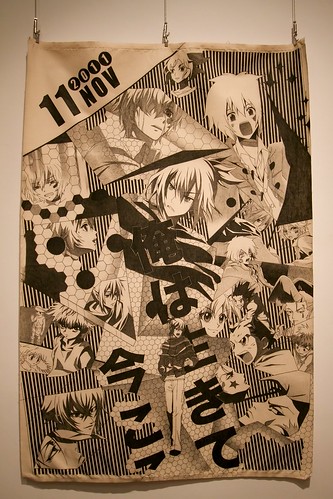 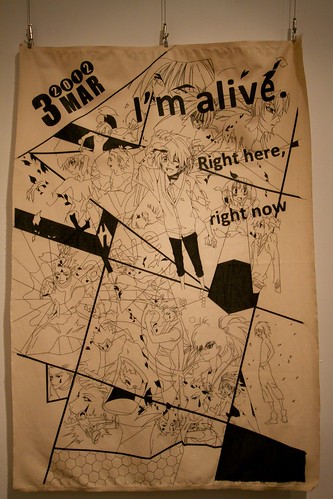 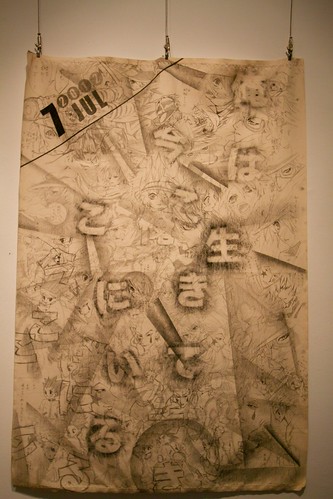 Each plywood page is like a close-up of an imaginary manga page. Using the division of panels, wide shots and closer-ups of objects, text and visual cues found in the plywood, Alexis opens up random spaces of imagination by capturing an ongoing moment in a larger narrative that is undisclosed.

Without the use of any manga characters, plywood pages evokes the experience of manga-reading. It stirs the mind to respond to the presented scenes by automatically linking adjacent panels and filling up the mental blanks for the moments before and after the scenes.

Drawing onto plywood with pencils is a new discovery or Alexis. She felt that it allows her to quickly execute her ideas and applied on easier, as compared to cotton duck. 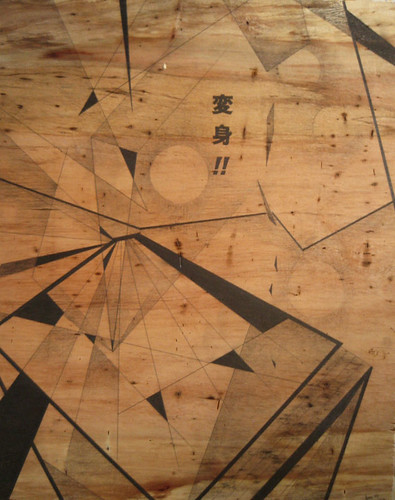 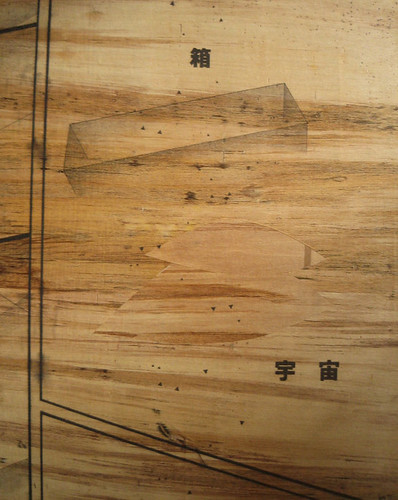 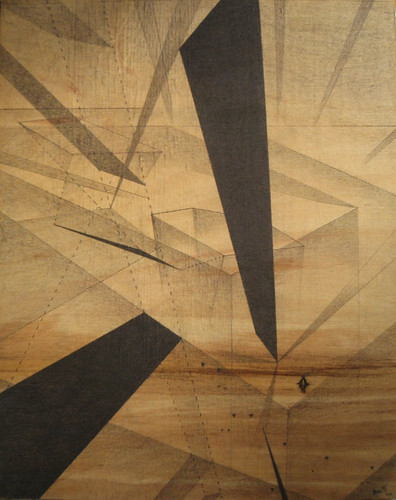 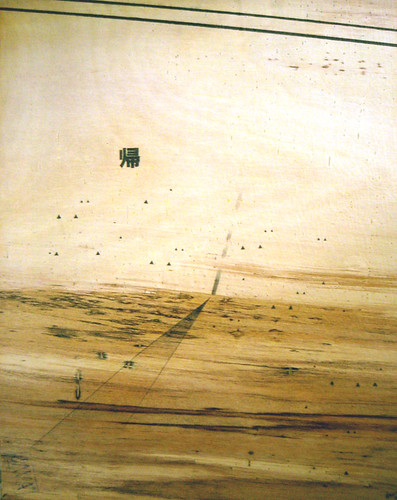 Pieces was created over a year using superimposed facial expressions of manga characters, drawn with pencil on Japanese calligraphy paper, from 3 manga series. Pigments and color spray were applied to generate the organic atmosphere that gelled the fragments of emotions together.

For pieces, the drawings of images of Ritsuka Aoyagi and Ayase Yukiya were predominantly used. These characters came from the manga Loveless and Okane ga nai respectively, both intended for a female audience. Alexis used the vulnerability expressed in the 2 androgynous characters to convey the feminine mind, one half of the genderless inner self. Drawings of the characters Rikuo Nura and Kubinashi from shonen manga Nurarihyon no mago, intended for a young male audience, were later added to integrate the masculine spirit to complete the artwork.

Viewed from a distance, a spiral pattern can be discerned that radiates from/spin towards a void at the top left section of the canvas. Across this void, two drawings of the same character (Ayase Yukiya) meet each other – a metaphor for one’s encounter with the inner self and the achieving of clarity among the emotional whirlpool of the inner world.

Alexis came to a conclusion for pieces, an artwork intended to represent the private self to a public audience, after an uncertain year of trial and error where drawings were repeatedly made and overlapped until finally, the work can satisfactorily communicate the emotionally turbulent yet harmonious inner landscape. 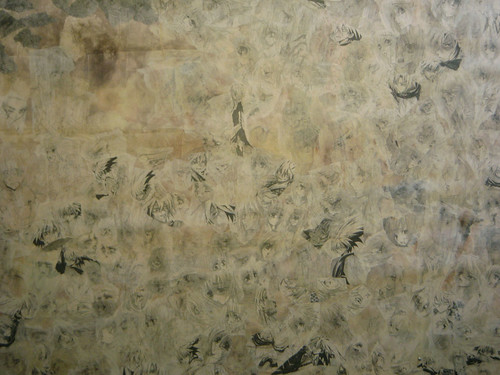 Many hope that Alexis will one day create her original Manga characters and story and extend the Manga art to another level. Her attempts in re-creating the Manga art as a Manga fan is very evident, even to the selection and use of materials. I hope to see her fulfilling her identity as an artist while she brings, not just the Manga art and culture, but the spirit of Manga to the next level. During the interview, I shared with her that I felt her plywood pages series exudes her artist identity and hope that she will continue in that area as she piece herself out of the Manga style, but into the Manga spirit. 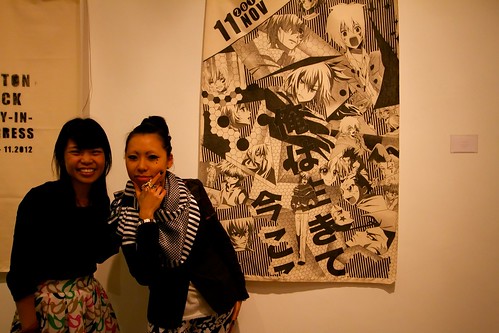 The writer and the artist