The Singapore Art Museum and Credit Suisse are proud to present Seeker of Hope: Works by Jia Aili as part of the Credit Suisse “Innovation in Art” series.

The Singapore Art Museum and Credit Suisse are proud to present Seeker of Hope: Works by Jia Aili as part of the Credit Suisse “Innovation in Art” series. This annual exhibition is a regional survey featuring artists’ works that are meditations on social and cultural transformations, artistically interesting but not necessarily understood. 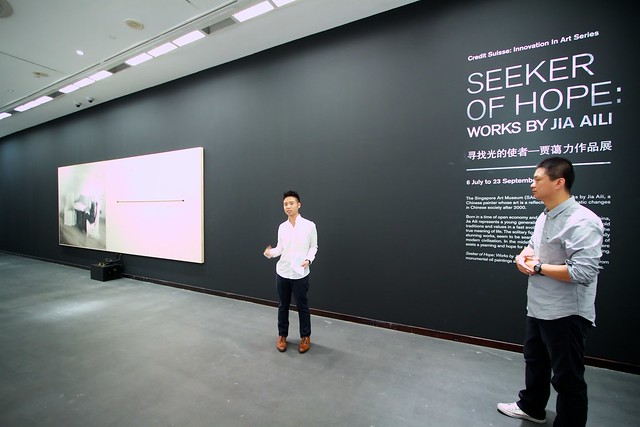 The museum was very interested in presenting a longer series focussing on painting mainly because of the museum’s concern and desire to encourage painting in Singapore. After the late 80s when contemporary art practise first came into the mainstream in Singapore, one of the defining features of this movement was the extension of other art genres like installation, performance and conceptual photography as such painting as a practise has shrunk in the face of the growth in popularity of the other art forms. It was thus crucial at this juncture that the Singapore Art Museum give a more concerted focus to the medium of artistic inquiry in the region.

This exhibition is important as Jia Aili is representative of one of the most vibrant painting traditions in contemporary Asia but yet as part of a post 80s generation, his language is unique. A product of the one-child policy introduced in 1978, Jia, who was born in 1979, expresses the sentiments and attitudes of his generation: Growing up in the ‘new’ China, although knowing no economic hardship and having no political baggage yet feeling isolated and alone as they enter adulthood.

Jia’s large scale creations, all the more impressive as he works without assistants, are visually stunning pieces featuring bleak landscapes, mysterious, solitary masked figures, astronauts and space crafts. Jia sees himself as a commentator: What is the true quality and meaning of life? Are we losing our traditions and values in this age of rapid industrialisation? Have we lost our faith in this world? 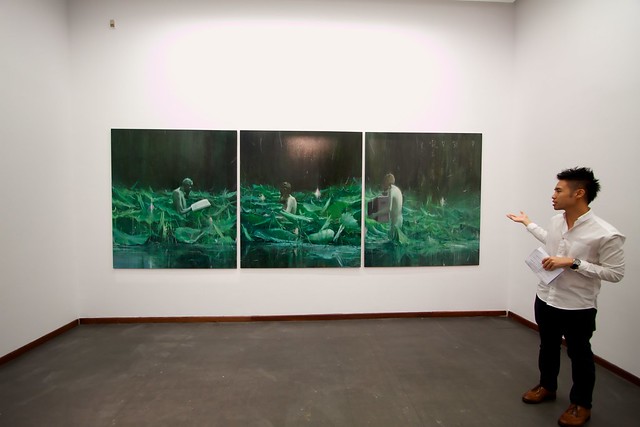 In The Wasteland (2007), Jia was inspired by the events that happened in Shenyang where he studied. Once a heavy manufacturing industrial town held up as a shining example of China’s socialist economy, its massive factories went bankrupt and millions of people were made jobless when manufacturing went into decline as the focus shifted to high tech industries instead. 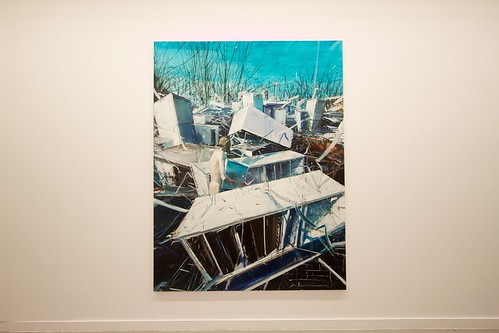 Repulsion for the time we live in can also be seen in The Serbonian Bog (2007) series of paintings. The murky green of the canvases depicts a suffocating swamp where we see solitary masked figures wading through the murk carrying objects like a book and a television. These are symbols of good and evil respectively for Jia who considers the television a mesmerising all controlling force with which he has a love-hate relationship with.

Amidst all the bleakness, as in the title of the exhibition, there is a glimmer of hope, Untitled (2010-2012), shows three young children, one of whom is wearing an astronaut’s helmet. The pastoral setting takes its inspiration from Leonardo da Vinci’s Madonna of the Rocks and points the viewer onto an optimistic road. 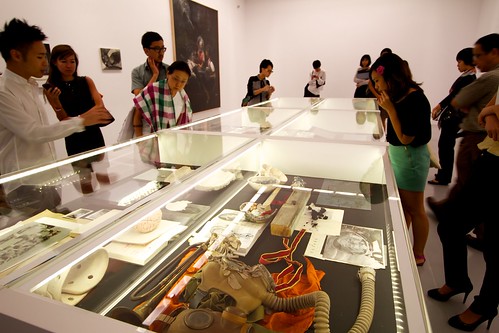 Jeremy Sharma’s painting installation, Kurosawa (2012), follows in the tradition of Ian Davenport’s puddle paintings and Jackson Pollock’s pouring and dripping techniques while the work’s mainly black and white washes are inspired by the Japanese filmmaker Akira Kurosawa (after whom the installation is named) whose films played much on the use of light and darkness that were metaphors for good and evil respectively. Sharma also likens the work to a waterfall and Kurosawa’s films also featured many rain sequences. 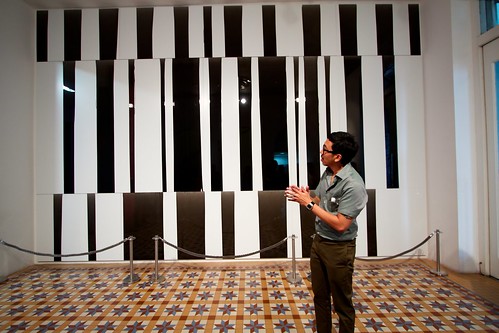 Yeo Shih Yun’s Conversations with Trees (2011-2012) looks remarkably like a traditional Chinese ink painting and yet was formulated by ingeniously incorporating silkscreen, performance and new media to translate this age old art form. Yeo tied Chinese ink brushes to trees and allowed the natural swaying of the branches to create marks. She then processed these ‘acts of nature’ onto silkscreen and combined the marks she found most attractive to create a completely new work. Videos on display explain her unique artistic process. 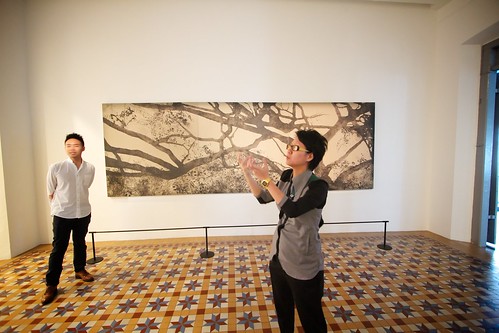 Click here to view more photos of the exhibition, Seeker of Hope by Jia Aili, taken by Eric Lim