Nicola Anthony wants to take you on a visual tour of the Art Stage through her eyes of an artist, dashing from one inspiration to the next.

I love to visit big contemporary art fairs, and I’m usually there in two guises. With my ‘art critic hat’ on, I check out the newest trends, the most exciting artists, discover what has worked, and what is less successful, how the booths have been curated. But looking with the eye of an artist, I want to be awed, to check out artists and galleries I admire, discover new inspirations, and to see how my own practice fits into a wider world of art.

Interestingly, sometimes these two points of view differ – and I think that’s because with my ‘artist hat’ on, I am able to look at the artwork as many components, sometimes I’m really interested in the colour or texture of something but not the overall composition. Other times there’s a section of the work that I love, while perhaps the rest of the canvas doesn’t appeal. With my other, more critical eye, I have to weigh it all up and ultimately decide on the piece as a whole.

I believe that both these things are OK, and I often highlight to others that it’s fine to like just a part of an artwork, or love something about but not be entirely sure why, or even to dislike a piece – it’s all down to personal taste, so it’s up to you to decide.

I want to take you – the reader – on a visual tour of the art fair through my eyes of an artist, dashing from one inspiration to the next.

I will admit, that upon arrival I had a plan and a map, but, like the proverbial kid in a sweet shop, I’m afraid I got pulled in many directions and walked a haphazard zig-zag of wonderment through the show. I began at some of my favourite pieces by Ang Sookoon, at FOST Gallery – Her beautiful crystals grown on real, preserved bread form a fusion of the fantastic and the familiar. 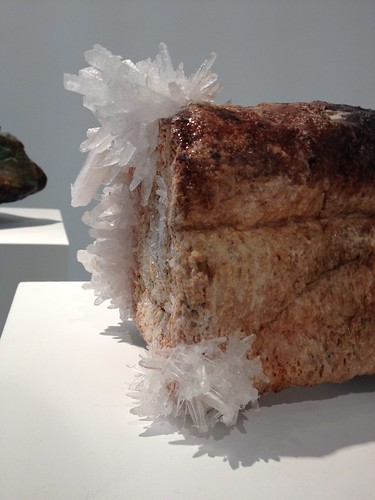 Another artwork with an organic feel was ‘Consumption’ by Zang Kun Kun in the booth next door, GAGPROJECTS. This installation caught my eye as it grew out of the circular disks on the wall, cascaded onto the floor mischievously, and held a bold and striking form as the singular piece in this quite large space. 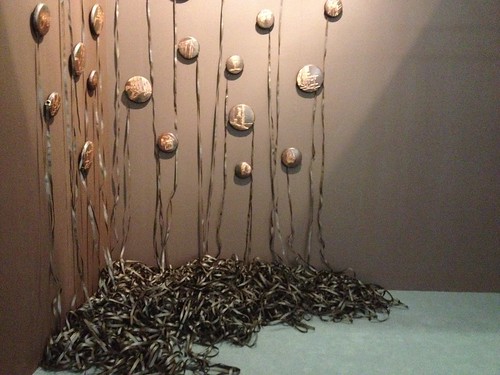 Next I visited the Singapore Platform. The performance piece did not have much resonance for me personally, and also left an assortment of sports paraphernalia on the floor of the booth for the duration of the day which seemed to perplex visitors – was this the art or the discarded costume of the performer? Perhaps this was the point. I enjoyed the silver marker pen painting which spoke mostly to me about the satisfying action of sliding pen across canvas (and had the effect of activating my ‘magpie’ instincts – I can’t resist the shiny ones). The piece sought to reference our consumer-culture, and provoke thought on what ‘success’ in the art world means, against a backdrop of stereotypes that exist in the industry.

I was sucked into the immersive installation curated by Singapore’s Jason Wee of Grey Projects, with talented artists Jeremy Sharma and Khiew Huey Chan. Inside this darkened space, you encounter a strange, spiky, geometric terrain, both melancholy and excitingly unfamiliar. 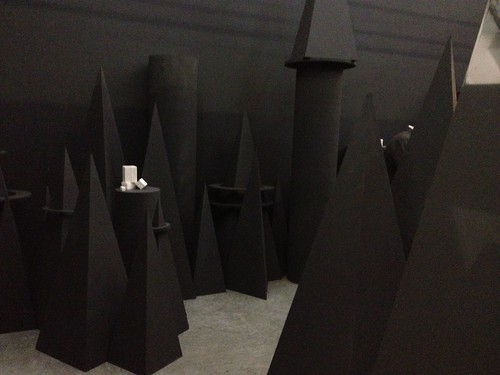 Then, keeping the theme of melancholy, I swung from the futuristic to the vintage at Yavuz Fine Art (who have two booths at the show as well as a separate exhibition opening at their Waterloo Street gallery curated by Iola Lenzi). The piece pictured below is by internationally recognised Thai artist of Indian descent, Navin Rawanchaikul. With an air of apothecary, a medicine cabinet is filled with old glass bottles, each filled with a photograph. Rawanchaikul has collected images of people he meets, whose professions are dying – like the traditional medicine seller. While ancient recipes and skills die out, their memories are preserved forever in this nostalgic sculpture. 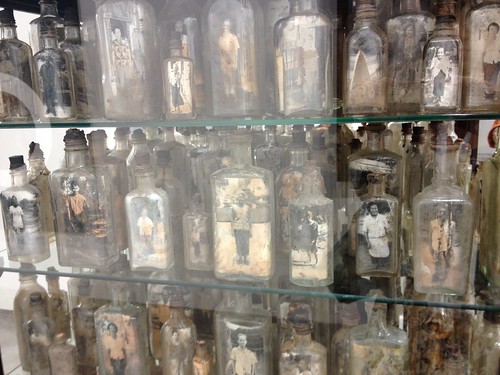 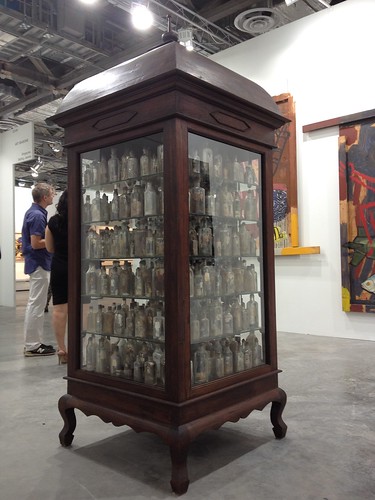 Around the fair were several artworks by Arne Quinze, who has captured something else in a glass cabinet of sorts – a greenhouse. This work, similar in concept to his ‘secret gardens’, is a garden “like a soul which each of us has and in which you can store your entire past, your secrets, your pain and your expectations. You fence off this space with fences to be yourself. You have no choice. Your mind is limited and the world is incommensurable, so you need to set boundaries without limiting yourself” says the artist. 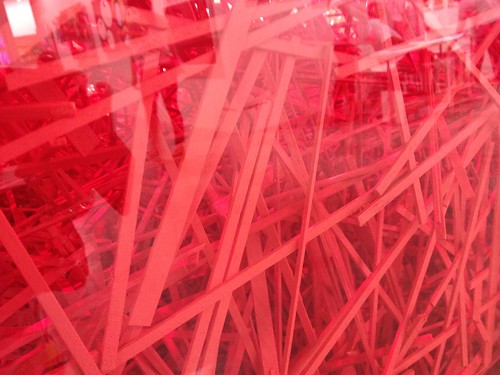 I like the idea of the garden or artwork being a place where we store things, have memories, connections, idea, new thoughts, buried secrets. This makes the sculpture very different for each one of us. The use of mirrors in his work reinforces this. 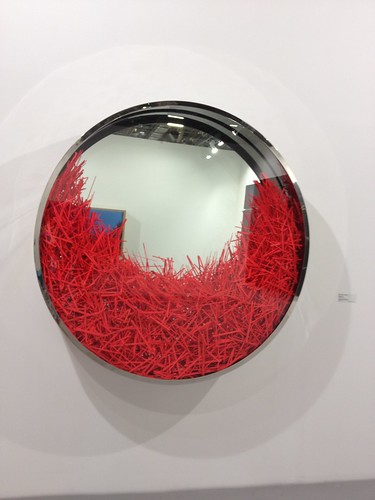 I was intrigued to find this concept of threads, connections and fibres mirrored in many places around Art Stage, including in the architecture of the space designed by Yann Follain of WY-TO, the Parisian / Singaporean architecture firm. Inspired by the textile industry of Southeast Asia, Yann Follain, co-founder of WY-TO, has designed a structure made from black strips of material that adorns the Doorways and the VIP Lounge, inspired by the loom, but also with a dark, skeletal feel. The piece forms connections between present and past, traditional craftsmanship and contemporary practice.

Also using threads to illustrate connections, Chiharu Shiota’s work appeared at Haunch of Venison (London), and ARNDT Gallery (Germany). She is a Japanese performance and installation artist best known for creating monumental yet delicate, poetic environments. Her disorienting cocoons and sculptures full of yarn arose from the Shiota’s desire to ‘draw in the air’ and represent physical anxieties the artist has experienced. 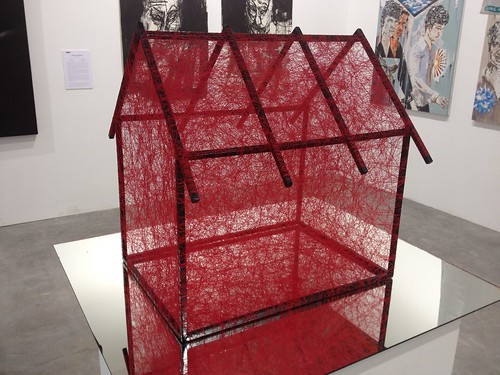 Some more traditional fibres in the form of crochet, over animal sculptures…. (by Joanna Vasconcelos, Haunch of Venison Gallery): 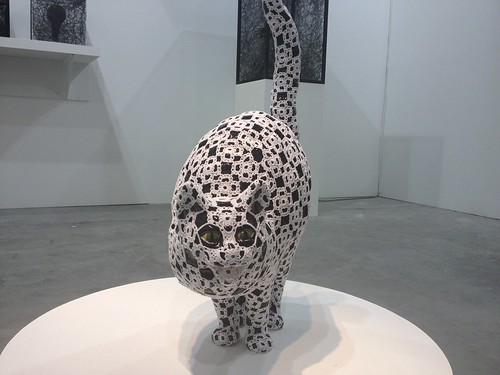 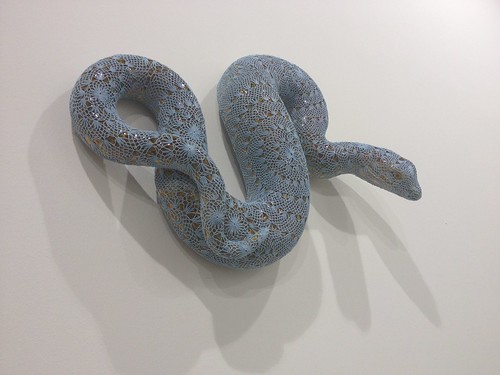 Turning the corner, I saw ahead of me a network of fine gold veins stretching across the surface of some traditional ceramic pottery, it’s recycled broken fragments being put back together to become something of beauty and value. This is a Korean artist who has impressed me on more than one occasion – YeeSookYung, at Gallery Hyundai. Made from ‘ceramic trash’,YeesookYung’s uncanny and bumpy objects have organic, bubbling forms featuring fragments of discarded Korean vases joined in a frankenstein-like manner with epoxy and gold leaf to make new, growing forms. 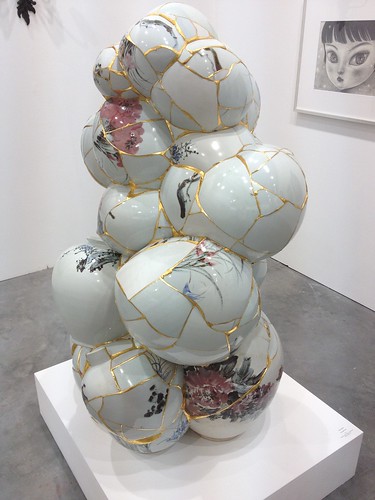 I will share with you one final artist who caught my eye in the Project Stage – Fumihiro Takemura at Kodama Gallery (Tokyo). Following on with what seemed to become a theme, this is another artist using fibres and lines, but he employs the use of lines of paint. As if squeezed very finely from the tube, and left unmixed on the canvas surface, each line of paint becomes part of a delicate grid or web which, in places, breaks down into more haphazard lines: a pleasing abstract geometric image. However, when we step closer, we see that these lines are lifting away from the canvas, becoming tiny pieces of architecture – bridges, buildings, ferris wheels. It is extremely delicate work that is effective on several levels. As I peered at the surfaces, I found myself wishing I lived in this glorious, colourful world made of paint and geometry – take a look for yourself: 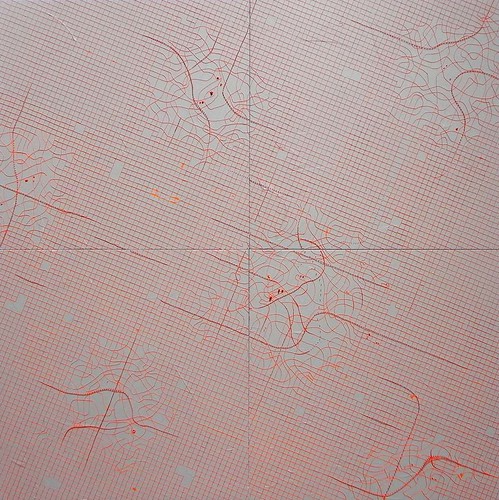 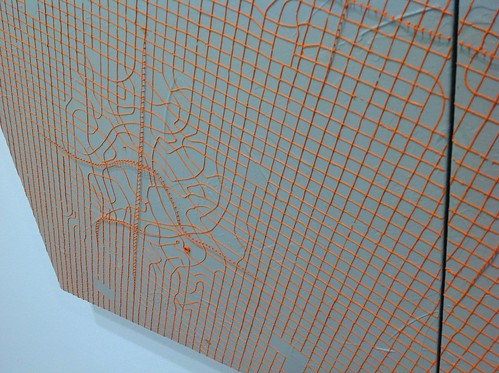 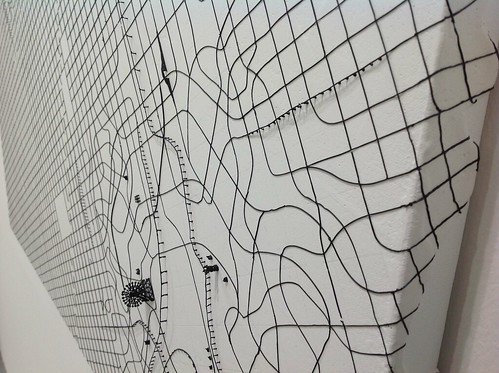 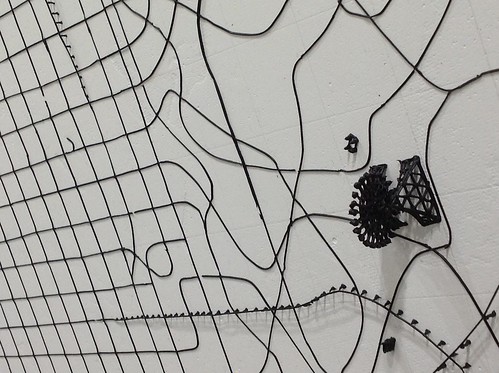 Venue: Marina Bay Sands
The fair is open to the public from 24-27 January.