This joint exhibition showcases 20 new works by third-generation Singapore artists, Anthony Chua Say Hua and Hong Sek Chern. Both artists, who are also husband and wife, work primarily with Chinese ink medium and have each developed a distinct contemporary ink practice. Among the exhibits are 3 ink compositions in which the two artists collaborated in an effort to create a new pictorial language through the marriage of their creative aesthetics. 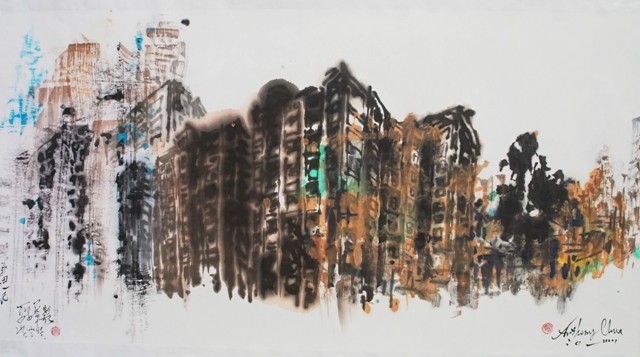 Born in Singapore in 1966, Anthony Chua Say Hua is a multi-award winning artist who has been practising full-time art since 1996. An alumnus of the prestigious Goldsmiths College, University of London under the Chen Chong Swee Overseas Art Scholarship and former winner of the National Arts Council’s Young Artist Award (2001), he earned the Silver Award in the established artist category in the 33rd UOB Painting of the Year Competition in 2014.

In addition to abstract compositions, Anthony has developed in recent years a fascinating ink series based on urban landscapes and old buildings in Singapore. He is fond of utilizing different types of brushes including the less conventional feather brushes, and is highly versatile in deploying smudging, rubbing and layering of ink to generate various interesting effects on the rice paper. Never one to shy away from pushing the envelope in his artistic explorations with the Chinese ink medium, Anthony’s ink compositions thrive on bold, expressive brushwork and are at times rendered in bright, vivacious colours. His latest series of experimental works reflect this infectious energy as he employs aspects of analytical cubism to infuse together varied motifs of fruits, architecture, and abstract nudes, creating a playful yet transformational visual imagery of the modern metropolis.

Born in Singapore in 1967, Hong Sek Chern is a multi-award winning artist and a former recipient of the National Arts Council’s Young Artist Award (2000). In 2001, she was one of the ten participants to be included in the President’s Young Talents Exhibition and in 2002 represented Singapore at the 25th Sao Paulo Biennale in Brazil. From 2004 to 2006, Sek Chern sat as the Head of Programme for Diploma in Fine Art at the Nanyang Academy of Fine Arts (NAFA) where she previously graduated. Sek Chern was awarded the Grand Prize in the 26th UOB Painting of the Year Competition in 2007 and recently clinched the Gold Award in the established artist category in this year’s UOB Painting Competition.

Sek Chern’s creative production is informed by traditional Chinese ink methods as well as Western modern aesthetics. Over the years, she has established a stylized ink practice recognizable for its masterful interplay of architectural blocks and lines, coupled with a multi-point perspective in which superimposed frames and objects appear overlaid or collapsed upon one another. In many instances, her images comprise dense, familiar yet alienating structures that epitomize urban living; space-time notions are purposefully destabilized to reconstruct experiences beyond physical boundaries and encapsulate the tension between the old and the new, as well as visible and invisible threads of existence.