The artist presents a series of works, commemorating the forgotten women, whose country had turned their back on them, after they fought in the war during Algerian’s struggle for independence from the occupying French in the 1950s. – Geraldine Lee reports from Dubai

Using Italian auteur Gillo Pontecorvo’s film ‘The Battle of Algiers’ as his jump off point, Faulwell conceived the idea where he could comment on the subject of gender through a critique of history, politics and society. Gillo’s seminal 1966 film vividly dramatises a key year in the tumultuous Algerian struggle for independence from the occupying French in the 1950s. One scene depicts three Algerian women participating in a clandestine bombing raid thus portraying Algerian women as active agents in the conflict. The film however does not address their subsequent fates which prompted Faulwell to embark on an almost two and a half year research project into the lives of these women.

What he found was scant literature on only fifteen individual women out of over ten thousand who had fought in the war. They had either been killed in combat or had been captured by the French. The latter were subjected to brutal torture and sentenced to death but were later pardoned at the end of the war and repatriated to Algeria. Ironically, these same women who fought for what they thought would be equality in a post-colonial Algeria were stigmatised on their return. 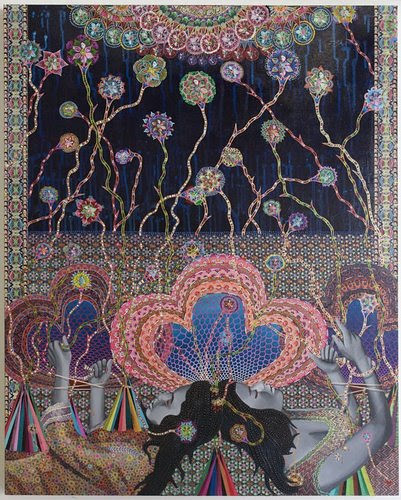 Faulwell’s portraits of these largely forgotten women, whose country had turned their back on them, are an intricate and elaborately textured collage of acrylic paint and geometric paper cut-outs. With their pallid grey skin and sightless, hollow eyes, Faulwell has pointedly depicted the women as monuments. This is in stark contrast to the riot of colour which jumps out at the viewer through his repeated geometric patterns. The quasi-religious imagery – some of the women appear bound while others bleed from pricks to their bodies – heightens a feeling of martyrdom. Combined with the whimsical flowers sprouting from their eyes and the halo-like motifs around their heads, the paintings appear to represent the women as icons worthy of beatification. 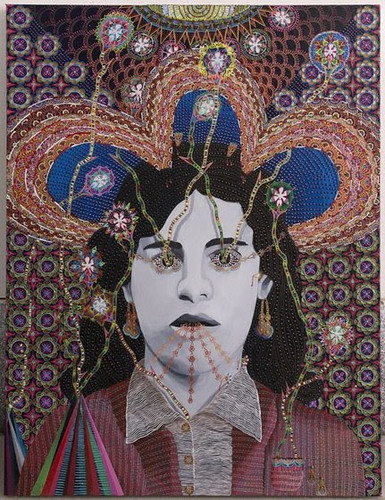 Faulwell treads on morally ambiguous grounds by positioning these women in this light: Can violence ever be justified as a means to an end? References to Frantz Fanon, a psychiatrist, philosopher, revolutionary, and author from the French colony of Martinique can be seen on books held by Faulwell’s figures. Fanon’s Decolonisation Theory influenced the Algerian fighters of the Front de Libération Nationale (FLN). His argument is that violence is a fundamental element of colonisation and it is the colonised native’s choice to continue to accept being a passive victim or to refuse and retaliate.

Faulwell considers himself to be a dispassionate observer making social commentary. His work is political but as he puts it, “political with a small p”. While it has a statement and a purpose, he strives to create dialogue that is neither one-sided nor didactic and the title of his exhibition reflects that. Inspired by a song lyric from Frances the Mute by the band The Mars Volta, Faulwell’s broken mirrors serve as a metaphor for self-reflection and shattered dreams; a bed that will never provide comfort or solace.

Bed of Broken Mirrors is thus an exceedingly nuanced work. The subjects Faulwell touches on have such relevance today and starkly illustrate the bitter reality of war in that there are ultimately no winners. 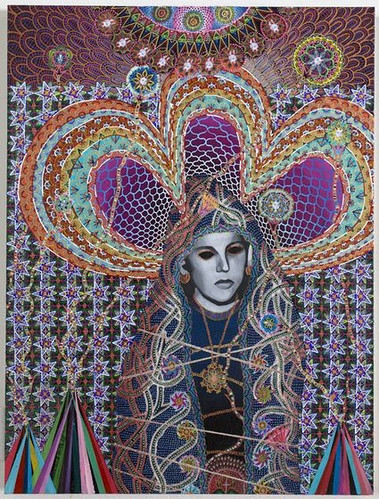 About the Artist
Asad Faulwell (b.1982) was born in Caldwell, Idaho and currently resides and works in Los Angeles. He graduated from UCSB in 2005 and Claremont Graduate University in 2008. While at Claremont he was awarded a Joan Mitchell Foundation Grant. Faulwell has exhibited at The Nerman Museum of Contemporary Art, Kansas; University Art Museum, Long Beach, California; Wignall Museum of Contemporary Art, California; Nassau County Art Museum, NY; Kravets/Wehby Gallery, New York; Untitled, Miami; Rogue Wave at L.A. Louver, Los Angeles; Josh Lilley Gallery, London; Lawrie Shabibi, Dubai and Marc Selwyn Fine Art among others. He has been featured in ArtForum, The Huffington Post, Harper’s Bazaar, The N.Y. Times and L.A. Weekly. His work is part of many private and public collections including The Oppenheimer Collection at The Nerman Museum of Contemporary Art, Kansas City; The Rubell Collection, Miami; The Franks-Suss Collection, London and the Jiminez-Colon Collection, Puerto Rico.

About Lawrie Shabibi
Founded in March 2011, Lawrie Shabibi is a contemporary art gallery housed in a 3000 square foot warehouse in Dubai’s Alserkal Avenue in Al Quoz industrial district. The gallery’s mission is to promote the works of relevant and innovative contemporary artists from the Middle East, North Africa and South Asia. The programme’s focus is on supporting established and emerging contemporary artistic talent. Lawrie Shabibi regularly publishes catalogues and organises public programmes such as artist talks and screenings, both at the gallery and non-profit spaces in Dubai.