From 13 July – 4 August, Art Space at Dbl O will play host to AUTOIDENTITY, an exhibition curated by fellow Artitute writer Joleen Loh. Through the personal experiences of the five young participating artists, Davy Animas, Jason Lee, Nel Lim, Sha Najak and Ummai Ummairoh, the exhibition seeks to examine the impact of the exclusive logic and artificial boundaries of ethnic classifications and stereotypes.

The enigmatic title is an ironic reference to the automated, mechanical classification of people and the personal act of writing autobiographies. It suggests the futility of attempting to find a sense of belonging through reductive taxonomies when the reality of our surrounding community is a medley of diverse influences and impulses. In a world of mass migration, ease of mobility and cultural intermixing, marginalization and its accompanying prejudices should seem laughable. AUTOIDENTITY asks all the right questions while addressing these pertinent areas of exclusion and alienation within our society. 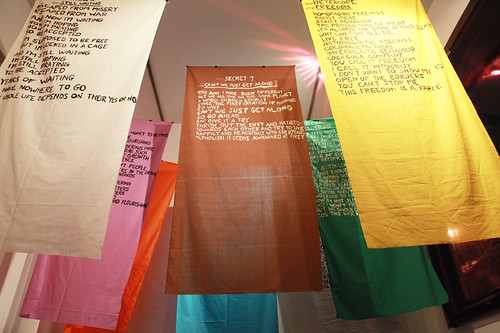 Being marginalized and ostracized is often the result of being misunderstood. Read the words printed on Jason Lee’s colourful flags and you might be inclined to think them written by pacifists or flower children. From the conciliatory, almost hippie-like tone of “can’t we just get along?” to the vulnerability and contingency of “my whole life depends on their yes or no”, these sensitive words were actually all borrowed from punk bands, making it difficult for viewers to imagine cacophonous guitar riffs or raucous vocals as their accompaniment. Taking these lyrics out of context, Lee suggests to viewers that punk subculture, while commonly associated with anarchy and rebellion, actually promotes cohesion and acceptance.

Another text-based work, poems written by artist and foreign worker Ummai Ummairoh, spells out the effacement and struggles she faced throughout her career. Originally written in her native Indonesian and poignantly translated by Kamiliah Bahdar, Ummairoh’s poems arouse sympathy and compassion for not only domestic workers, but also all who have been oppressed and demeaned. They are composed of pure emotion (“I want to scream out loud/ As forceful as lightning”), confronting readers with the cruel ill treatment of domestic workers. Do not let the absence of relevant punctuation fool you: the pair of poems displayed is meant to evoke the artist’s anger, frustration and sadness. Attendees of opening night, myself included, who watched Ummairoh’s recital of her poems in Indonesian, can attest to her compelling performance, replete with vocal dynamics and uninhibited gesticulations, during which she even moved some visitors to tears. But beneath the searing passion, these poems also allude to the emotional fatigue (“Ennui/ A constant company through the days”) and diffidence (“should I resign myself to this fate/ And keep silent forever”) that the artist grappled with. 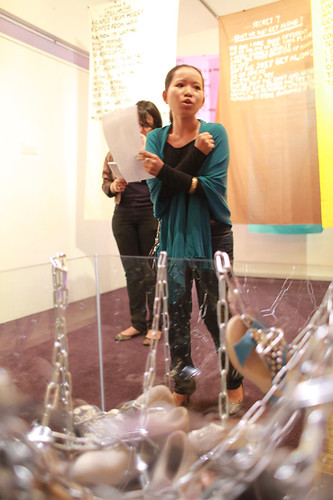 The stories of foreign domestic workers figure prominently in the exhibition. Nel Lim’s two works, created in collaboration with Loh, were motivated by the personal experiences of two domestic workers, Sari Uddin and Ann Amiya.

Alone, but Innumerably Watched, was based on Amiya’s ex-employer’s dehumanizing practice of watching her constantly with surveillance cameras. While I found this unfathomable, not to mention discriminatory, such horrific practices are actually commonplace, which begs the question: does the privilege of citizenship give us the right to alienate and differentiate others? 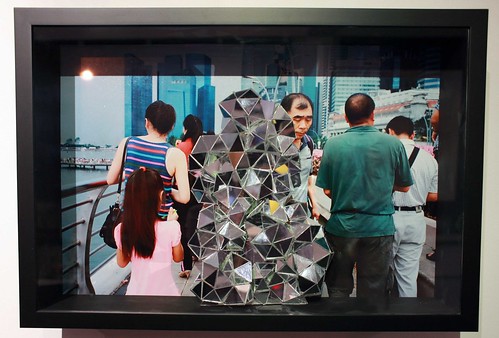 Nel Lim, “Here We Are Nowhere”

Despite its nihilistic title, the first thing that catches your eye in Here We Are Nowhere is a shiny, kaleidoscopic mirror structure. But look beyond this resplendent façade, and you will find a human figure overshadowed. This neglected figure is Sari Uddin, whose conversations with Loh and Lim inspired this artwork. Uddin ruefully recalls being reprimanded for smiling at a passerby at her ex-employer’s home. From then on, she was strictly prohibited from smiling or greeting anyone, stripping her of any trace of human personality and necessary interaction. Lim’s prints highlight the absurdity of Uddin’s exclusion: even while surrounded by passers-by in a crowded public arena, Uddin is completely ignored, not even given a passing glance. One of the passers-by in the foreground even seems to be pushing past her, peeved that she is blocking a common path. The mirror structure that effaces her thus underscores her loneliness and abandonment, while also referencing our vanity of wanting to always see ourselves. The human gaze, while capable of objectifying and denigrating, is clearly also able to alienate and disregard. While Lim has always photographed and corresponded with foreign workers in his artistic practice, his latest work in this exhibition feels more dimensional and thoughtful than anything he has attempted before. Here, collaboration with curator and subject has engendered ostensible progress in his practice.

Visually captivating, AUTOIDENTITY comprises artwork of varied, intriguing media, adroitly tackling sensitive issues, such as the plight of foreign workers and the detrimental impact of stereotyping and profiling, which may have been brushed aside for fear of arousing controversy and malcontent. But only by addressing such key issues will we be able to dispel desensitization, look beyond reductive categorizations and prejudices, and connect to the humanity inherent in all of us.