If there’s one thing to learn from Chinese contemporary arts painter Liu Mingxiao, it is to find one’s interest and develop it into a personal, unique style – after all, that is what rocketed him to international fame, with his iconic works entitled ‘The Flower Festival’ series exhibited in various high-profile exhibitions like the Chongqing Art Museum and the first Xiamen Art Biennale in Xiamen Art Museum. This same series made its debut in our shores on 9 January in an exhibition titled ‘Artistry of Mood’ at the Yunlore Arts Gallery at Raffles Hotel Arcade. 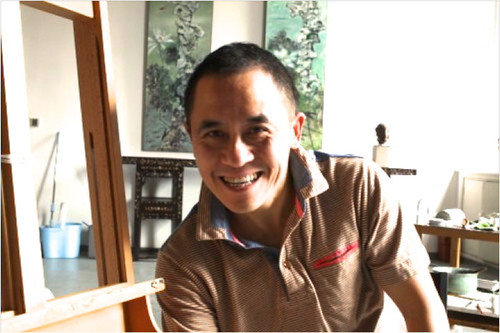 “It is my first here time in Singapore, and I really love the energy I’m feeling,” Liu expresses in Mandarin at his exhibition’s opening reception in Yunlore Arts. “I am very excited to showcase my works to the art lovers and enthusiasts in Singapore.”

Liu’s works are indeed an eye-opener. In his Flower Festival series, traditional Chinese elements such as chairs and vases are drawn in a two-dimensional manner while small animals with shading details grace the art piece. Liu masterfully integrates the two forms together, achieving a seamless work of art that is pleasing to the eyes.

“The Flower Festival series were inspired by the portraits of old Chinese emperors. In those portraits, they are always facing forward,” Liu explains, revealing his academic knowledge and acquaintance with Chinese culture. “This is the essential characteristic of Chinese paintings.”

“By adopting this form of style, and adding in ‘Western’ elements shadowing effects, I created my own personal style. So that when people look at my works, they would immediately know who the author is.” 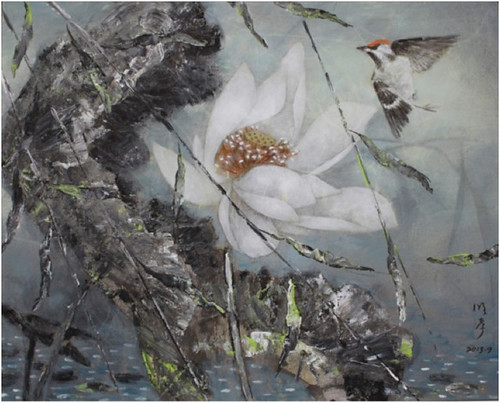 Liu studied in the Chinese Painting department of the Sichuan Fine Arts Institute, and is currently the  Director. During his time there, he was introduced to oil painting by teachers and fellow schoolmates, and quickly developed an interest in it. Later on, Liu found that crossing Chinese and Western elements of painting best expressed himself, and thus made it his trademark as an artist.

It is not all about the style, however – the thoughts and experiences of the artist play a vital part too. This is especially true for his other series, entitled ‘The Lotus Festival’, which is also showcased in this exhibition.

“In Buddhist philosophy, the lotus flower can be used to signify a lot of things. This is why many renowned scholars have chosen to draw lotuses since the old times. For instance, Chinese artist Zhang Da Qian’s ‘Lotus’ painting fetched USD$10.4 million in a recent auction in Hong Kong. Therefore, the visual experience concerning lotus flowers accumulated in these paintings have reached the point of saturation. If there is no unique perspective offered, your work would just be one of the thousands.” 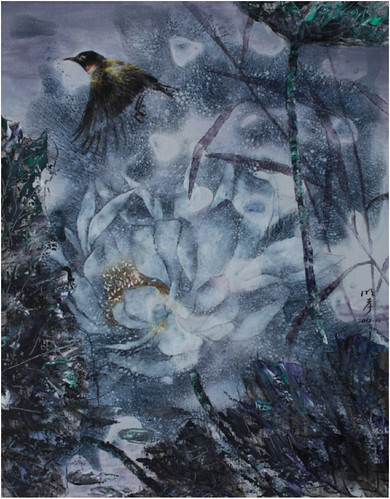 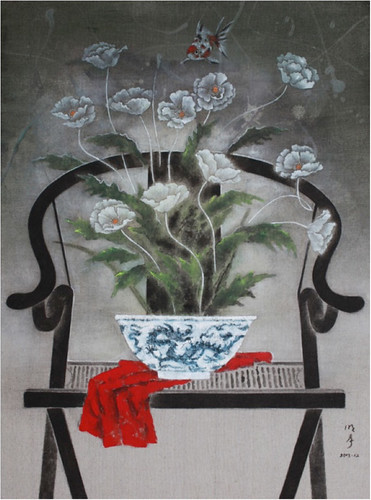 In this series, Liu is able to clearly express himself through the mixture of acrylic and water-ink on canvas, using fluid and natural strokes that make all his pieces one of a kind.

Moreover, the Lotus Festival series also stars little animals like birds and fishes positioned at interesting and unrealistic places. This, he shares, is intentionally done to create a surreal piece that pulls the audience away from reality.

“I want my work to allow the audience to step away from reality, giving them room to contemplate on it, because that’s what makes an art meaningful.”

Regarding his thoughts on contemporary Chinese art, he smiles and said: “I’m sure it will continue to evolve, if anything, because of the changing of times, which makes it impossible not to change along. As the society advances, the ways and methods used to express ourselves change, so it is definite that the expression of Chinese art by artists of this age will change too.”

The Artistry of Mood exhibition in Yunlore Arts will run till 18 February. Admission is free.