“Frame x Frame” is a new film series initiated by The Arts House to showcase and explore the different dimensions of Singapore cinema. This quarterly programme is running from now till mid December 2012. Its good to see an art venue taking the effort to feature first-run screening of upcoming films as well as retrospectives of noted filmmakers.

William Phuan, The Director of The Arts House, shared with us “At the heart of Singapore cinema are many compelling local stories told by talented filmmakers, but few have had the chance to watch them on the big screen. We hope that the made-by-Singapore films showcased in Frame X Frame, some of which were not screened before, would appeal to all film-lovers and thus allow the local film scene to grow and flourish.”

Arrangements were made to the film-makers or the casts to be at some of the screenings; hence allowing the audiences a chance to understand the local film industry by interaction during the Q & A sessions after the screening.

I dropped by for a few of the screenings, the first one was “FOREVER 我爱你爱你爱你”, where I got to meet the lead actress, Joanna Dong, and the Director, Ms Wee Li Lin.

I asked Singer-Actress, Ms Joanna Dong, about her view of Singaporean creative talents stepping out of Singapore; at the after 25 Oct screening of “FOREVER” during the Q & A session.

Singaporean Director, Ms Wee Li Lin, was very kind to spare some time for an interview 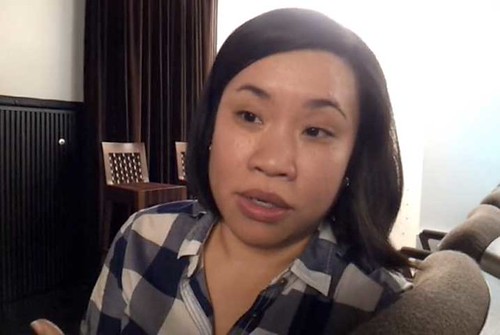 Weiteck: As a Film-maker, access to Local Talent or Funding, which is more difficult & what are the challenges for both?

Wee Li Lin: I think there is no shortage of local talent, but funding is always tough, the grants available by the MDA most certainly are a great booster, but making a film takes a lot of resources.

Weiteck: What is your outlook of the creative industry in Singapore, given the relative small domestic market.

Wee Li Lin: I think the outlook is positive, even though the domestic market is small, I think audiences for Singapore made (films) fare is growing and our home grown creative content is getting better and more diverse.

Weiteck: How does our creative industry fit in the creative eco-system of South-East Asia? Since regionally, we are able to relate to them more easily.

Wee Li Lin: I think we are going to see more co-productions between us and the region, its already happening and I think it is exciting and important. But in terms of infrastructure/facilities/expertise on making feature films, we still need a year or two to catch up with some of our neighbors who have been doing it much longer, but we are making good progress.

Weiteck: What is the difference in the industry as now compared to when you first started out as a film-maker?

Wee Li Lin: There are alot more filmmakers and it’s more a more competitive market, but there’s also more of a sense of protectiveness/togetherness, and a chance to illicit real change thanks to a few individuals who are making sure our
issues can be heard and the MDA being more receptive to listen and to nurture.

Weiteck: South Korea as an example, have been using their Creative & Entertainment industries very well to execute their Soft Power. How would you rate Singapore in this aspect?

Wee Li Lin: i think we need to get more Singapore films out to the international market for that to happen, it is slowly happening and I certainly hope to be part of that one day. But now we are just at the start of building a film industry and developing a voice. It’s very competitive in the international scene and so many good films do not get distribution beyond festivals, but ever so often there will be one that will fly out of the gate, like FOREVER FEVER, HOMERUN or TATSUMI, all of which have made some noise overseas.

Presented by The Arts House