Needles, threads, hammers, nails, blowtorches, pliers and so on are tools of the trade of the craftsmens at Hermès. It is not a glamorous job but a job that only a talented and skilled artist can achieve. 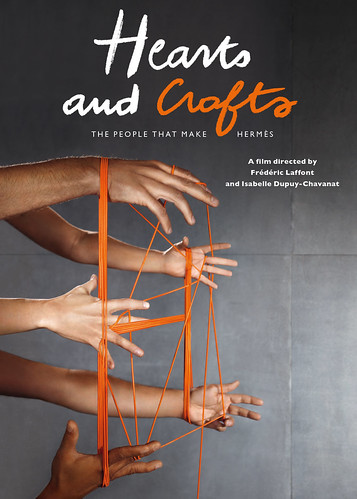 As I watched the film, “HEARTS AND CRAFTS: The People that Make Hermès”, I was transported back to the time when I was in the crafts business. Needles, threads, hammers, nails, blowtorches, pliers and so on were tools of my trade. And so are they to the craftsmens at Hermès. The job as a craftsperson has never been deem as a glamorous nor a well paid job. We all associate it as the type of chores that only our grandmothers or mothers did when they knit us a scarf or mend our hemlines. But we often forget that these were done with skills, dedications and love.

Out on the country side of Ardennes, Paris, where the skies are clear, the hills are rolling and birds are chirping. You will hear soft hammering of metal, in tune with melodic snipping sounds of leather from a simply French building. It is a workshop that belongs to one of the last luxury fashion houses, Hermès.

Hermès knows how important craftsmanship is as not only it makes each of their bags and accessories one of the kind. But by not succumbing to modern machinery, they also provide jobs and skills to individuals who are willing to learn, prick a few fingers but best of all give life to a piece of art created out of their bare hands. Yes, craftsmanship is a form of art. It is indeed the lowest form of art, however, it is also the most basic and valuable form of art. God has given us the best tools and that’s a pair of strong healthy hands.

As I watched “Hearts and Crafts”, I couldn’t help but noticed that the craftsmen worked with sense of calm and pride. Many of them are young and good looking adults who looked like they were just fresh out of grad school. In one interview, a craftsperson mentioned that finding a job in Paris was tough as the economy is still in the slums. However, she is grateful to be able to get into Hermès as a craftsperson. Now she not only have  a job, but new skills. Hermès craftsmen comes from all walks of life, some are slightly handicap or even worked as odd job labourours as they have no education nor certifications.

Ali, a polisher at Hermès, was told he can only be a cleaner for the rest of his life as he’s a deaf handicap. But Ali loves jewellery and decide to take on a polisher job at Hermès. Since then, he has learnt about jewellery, French, sign language and a new skill. But most of all, a respectable job and surrounded by beautiful art pieces.

Directed in 2011 by Frédéric Laffont and Isabelle Dupuy-Chavanat, they have captured the sounds of leather and crystal, the song of silk and metal, the words of the men and women and also their silences. In their cinematic testimonial they have brought together these sparks of life, enthusiasm, pride and passion, as each craftsperson assembles a handbag or a piece of jewellery. Step by step. Meticulously. With passion and respect, in the quest for excellence. This documentary pays homage to the artisans of the numerous Hermès métiers.

So now you know why luxury goods has their price and are so sought after, that’s because they were made from hours, days and months of dedications by the craftsperson. Catch the film “Hearts and Crafts: The People that Make Hermès” at The Cathay, opening on the 14th December 2011. Advance booking will be available on their website from the 1st December 2011. Tickets are going for $12. More details can be found on http://www.thepicturehouse.com.sg