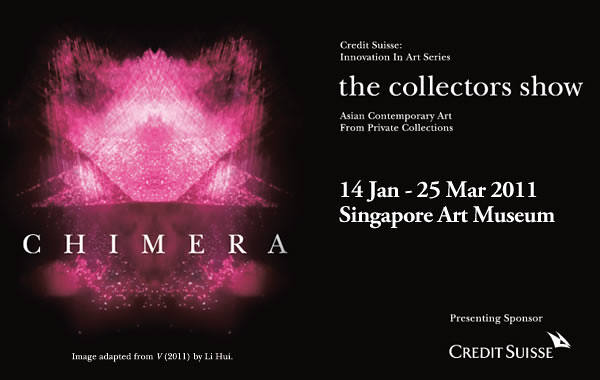 Honouring works by the local and regional contemporary art fraternity, The Singapore Art Museum (SAM) 2012 will jump start the New Year with a double-bill, The Collectors Show: Chimera and The Singapore Show: Future-Proof.

In contrast to the Future Proof exhibition, The Collectors Show: Chimera showcases contemporary Asian masterpieces from important private collections across the globe. While the Future Proof concentrates on the new generation embarking on exciting challenges, Chimera presents a more in-depth look into the many forms of contemporary art. The show offers viewers a rare glimpse of artworks by 18 of Asia’s most prolific contemporary artists.

Chimera is solely organised by SAM and sponsored by Credit Suisse as part of the Credit Suisse Innovation in Art Series. It will give viewers the unique opportunity to view these rare spectacular works which would otherwise not be accessible. Housed in the private collections of eminent collectors from around the worlds including North America, Europe, the Middle East, East Asia, South Asia and Southeast Asia, these works would otherwise be hidden from the public eye.

Titled Chimera, a deliberately evocative word that references both the mythological hybrid monster and the idea of an illusion, fantasy, or delusion, the exhibition presents contemporary art in all its various and hybrid forms, from painting to sculpture, to new media and interaction multi-media. The works selected eschew conventional spectacle in favour of a reflection on vision and visuality. 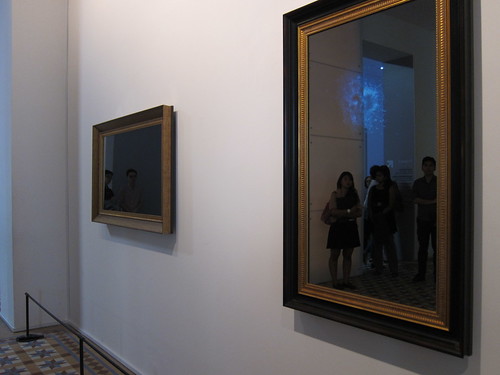 Lee Yong Baek’s Broken Mirror (Classic). Lee’s mirrors shatter before our eyes, unsettling our perceptions of the stability of the world around us, as well as that of the mirror (and art)’s role as a faithful chronicler of our environment. 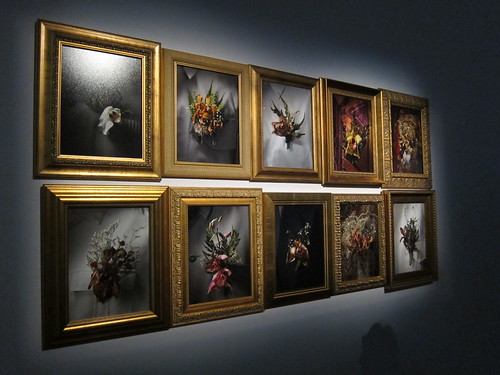 Yee I-Lann’s The Orang Besar Series: YB#1 – 10. Politicians and dignitaries in Malaysia frequently wear these corsages when they attend official functions held in their honour. The title of this work makes this clear – ‘YB’ is an abbreviation for the Malay term ‘Yang Berhormat’ (‘The Honourable’), used to address a person of political power or status in Malaysia. 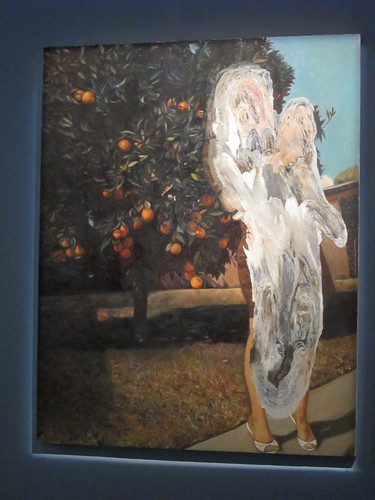 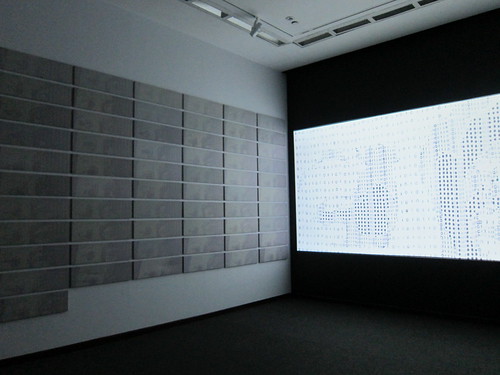 Tromarama’s Extraneous is an installation with video and batik panels.The animated image has been painstakingly created from 210 still frames, which flanked the video projection. Aptly enough, Tromarama have chosen to use batik as their medium – a traditional form of art unique to thei region that has been used as a means of recording the history in past times. Tromarama have updated this time-honoured art form by recording the images and issues of our time with binary code – a visual language befitting our digital age. 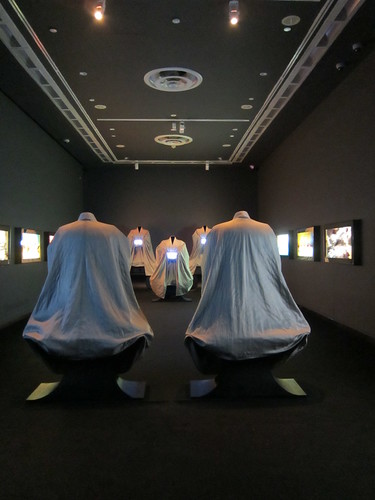 Sheba Chhachhi’s Winged Pilgrims: A Chronicle From Asia. Drawing parallels between ancient and contemporary time, the luminous and mesmeric images of this work tell the story of the journeys of various birds across landscapes drawn from both traditional art forms as well as contemporary documentary photography. 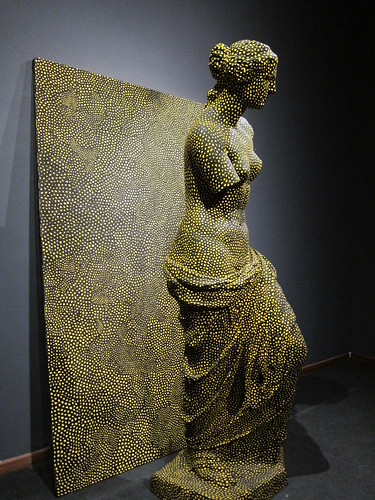 Yayoi Kusama’s Statue of Venue Obliterated By Infinity Nets 2/10. Yayoi Kusama is well known for her distinctive artworks with their obsessively covered surfaces. 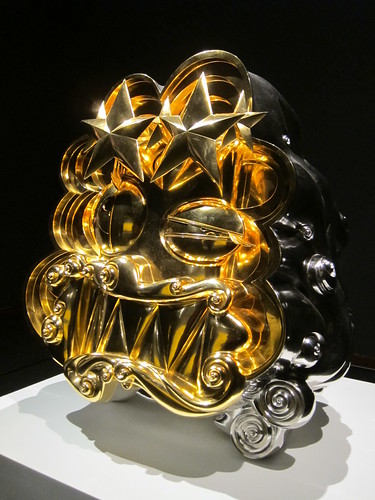 Takashi Murakami’s Jesus. In Murakami’s sculpture, a religious icon has been appropriated and stylised for contemporary times – Jesus’s visage is twisted and rendered in a pseudo-anime style. 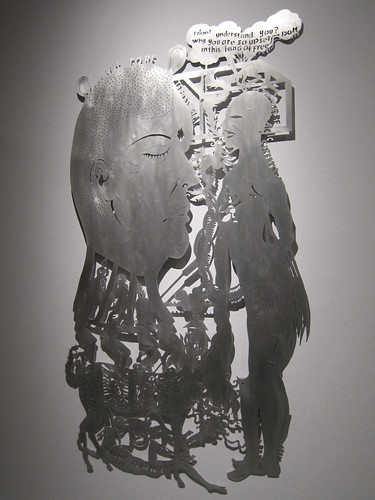 Entang Wiharso’s hybrid human forms recall the stylised, rhythmic figures carved into temple walls in Southeast Asia, such as those of the Hindu Prambanan temple which the artist lives close to, or those of the puppets used in traditional Javanese shadow puppet theatre. 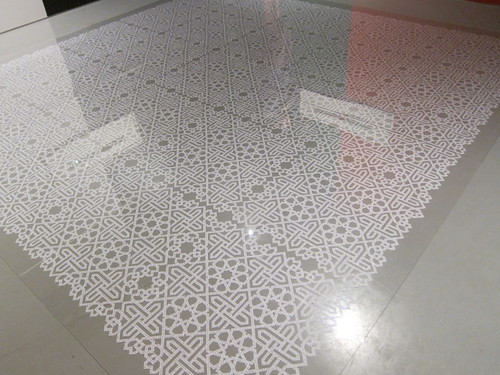 Hamra Abbas’ Please Do Not Step 1 is an installation work with enclosed wall as a space for meditation. The central space is covered with delicately woven paper strips bearing the text “Please Do Not Step”. 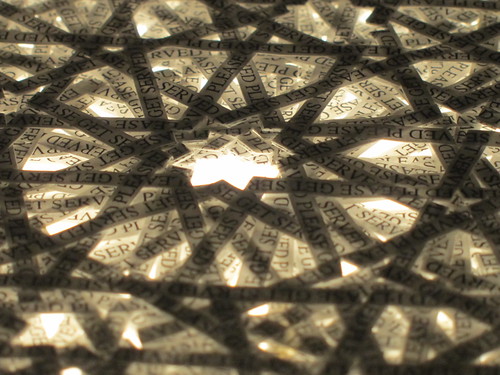 Harma Abbas’s Paper Plates, weaved together with thin strips of papers with words “Please Get Served” printed on. 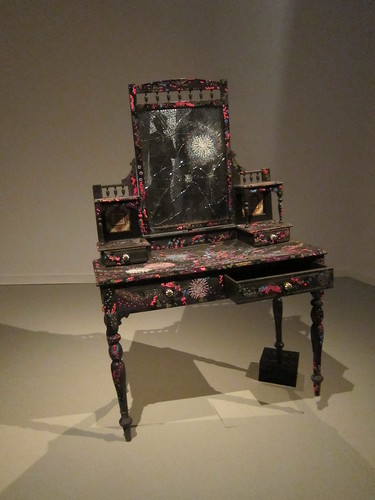 Bharti Kher’s Make Up (As You Go Along) makes reference to a woman’s daily toilette, the dresser with its mirror being a place for women to sit each morning to get ready for the day. 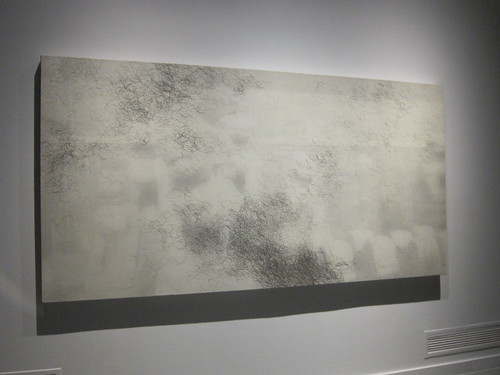 Lin Tianmiao’s Seeing Shadow series is composed from photographs of Beijing’s traditional classical courtyards and alleyways (hutong), which in recent years have been demolished to make way for the redevelopment. 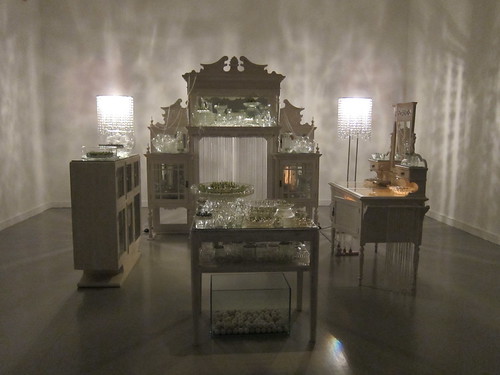 In Donna Ong’s The Sixth Day, everyday objects are transformed into a mise-en-scene of otherworldly beauty, an invitation to their audiences to enter, imagine, and create narratives of their own. 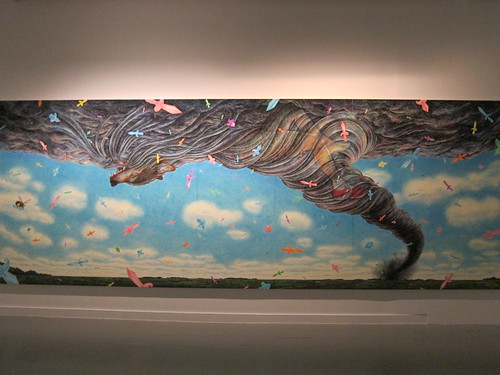 The works of Tomoko Konoike draw on a deep reservoir of myth and memories we have come to associate with our childhood or with fairytales. Chapter Two: Giant is from the artist’s Story series, which presents four chapters of a surrealistic narrative n reverse order, beginning with Chapter Four and culminating in Chapter One. 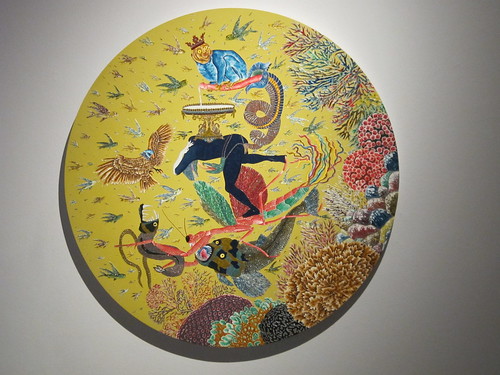 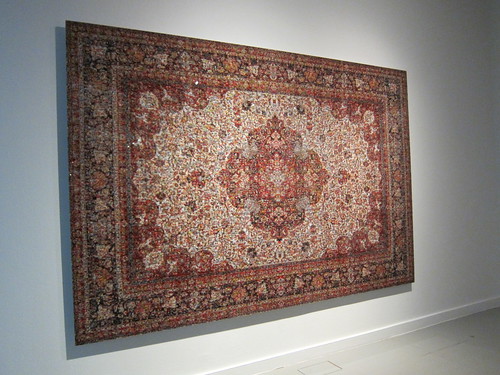 Rashid Rana’s Red Carpet IV. Rana’s Red Carpet series captures the violence simmering underneath the veneer of civilised society. It is composed from a collage of photographs from the slaughterhouse, a metaphor for the seething violence that Pakistan has witnessed in recent years.

Artitute will mention a few of our favourites here: 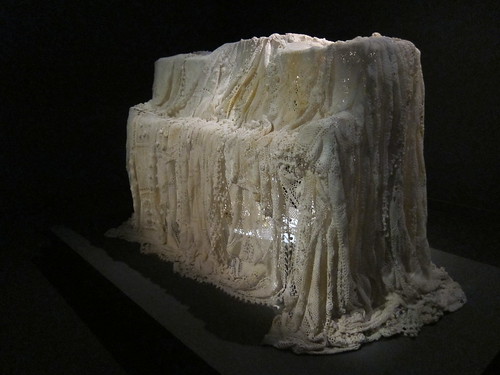 Fugue comprises a lace piano cover, swathed over an absent piano. Delicate in detail and haunting in its hollowness, this ghostly shroud calls attention to its absent object, poignantly emphasising its loss.

The work’s title makes reference to a musical term, the fugue. However, a ‘psychogenic fugue’ is also a psychological disorder, a state or period in which one loses awareness of one’s identity. This is often coupled with a flight from one’s usual environment. Both ideas are woven together in Eustaquio’s artwork, which is in part an homage to music, regarded by some in the past as the ‘highest’ of art forms but which, in contemporary times, has ceded its supremacy instead to the visual arts which now hold court in cavernous museums and elegant galleries. In the meantime, music languishes, compressed into digital bytes. In Eustaquio’s work, it exists as an exquisite carcass in place of the original object.

Eustaquio’s piano cover further challenges traditional hierarchies of art with its painstakingly detailed crocheted lace – an art form previously excluded from the realm of ‘fine art’, relegated instead to ‘craft’ or ‘women’s art’ – hence reminding us of how notions of art inevitably shift and change over time, as old forms are vacated to make way for the new, or return in new guises and forms, like a musical refrain. 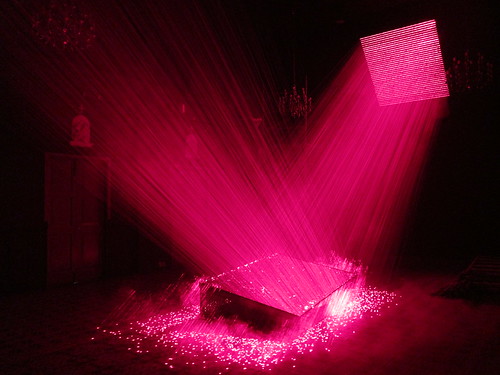 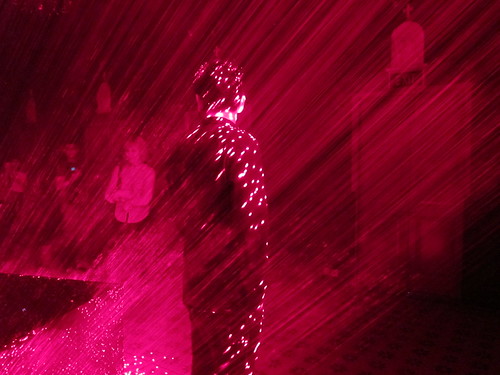 Li Hui creates atmospheric environments with lasers and light, suggesting the dizzying futurism of a science-fiction world that lies ahead, while offering an experience that borders on the spiritual and sublime.

V takes its name from the shape of the laser beams that sculpt the space, as they are beamed down from a laser board and reflected off an angled mirror, coalescing into pinpoints of red light in a cloud of smoke. The smoke and ethereal cluster of light recall depictions of the Ascension, and as visitors walk into the path of the beams, their bodies dissolve into pinpoints of light.

While its materials are minimalist and industrial, V is a powerfully evocative work which raises questions about physicality and immateriality; the spiritual and the transcendental. First exhibited at the Ullens Centre for Contemporary Art in Beijing, V is now re-installed for The Collectors Show in the Chapel space of the Singapore Art Museum (formally a Catholic school), giving the work an added resonance and power. 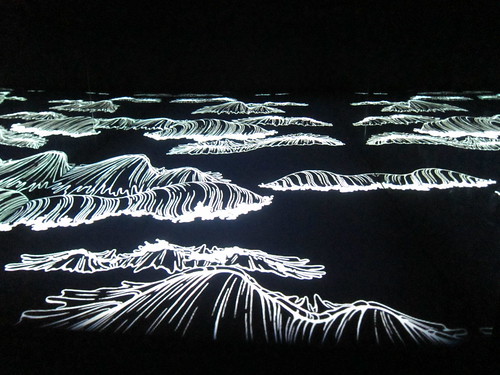 The sea has long held many in fascination with what lies beneath its mysterious depths. The sea at night is an even more unfortunate mystery, with the darkness of night further cloaking its impenetrable depths, inspiring emotions of wonder, fear, uncertainty and even contemplation.

Drawing on the sea’s evocative power, Tabaimo’s delicate yet powerful line drawings delineate a nocturnal seascape with breaking waves. Slowly, the viewer is offered a glimpse of the enigmatic, supernatural world that lies beneath the cresting waves, comprised of forms and organisms that simultaneously resemble corals or aquatic plants as well as human organs and entrails. Moving through these life forms is a strange creature, which could be a jellyfish, or a wig of white hair.

In the Japanese language, the word kaminoke refers to hair that grows on the head. It can also mean a supernatural spell, or an ailment thought to be caused by spirits or deities. In addition, the artist has explained that a wave is a metaphor for age-wrinkled skin, and in turn, a wrinkled is a metaphor for ripples on the surface of the water. Midnight Sea can therefore be seen as a metaphor for the human body or troubled subconscious, poetically reaffirming the intimate relationship between humanity, nature and forces that we cannot apprehend with our rational mind.

*All descriptions and explanations of artwork from SAM’s media pack.

Museum admission applies.
Open daily 10am to 7pm (last admission at 6.15pm), until 9pm on Fridays
Free admission every Friday from 6pm to 9pm