In light of Singapore’s upcoming 50th Anniversary, a group of artists have taken an alternative approach to the nation-centric celebrations, focusing instead on our ecological legacy and man’s relationship with nature.

In light of Singapore’s upcoming 50th Anniversary, a group of artists have taken an alternative approach to  the nation-centric celebrations, focusing instead on our ecological legacy and man’s relationship with nature.

Artitute chats with organiser Jacqueline Sim, as well as Karen Mitchell and Pang, all of whom have created new works for their show Working Title Not Working.

ARTITUTE: The title of this show – Working Title Not Working – seems at once declarative, yet also open-ended. Tell us a little more about it.

JACQUELINE SIM: The first thought that flashed across from my mind whilst deciding on the title was that it had to be oxymoronic… An organic title that rests on a strange equilibrium with no set definition, yet one that also stirs up dialogue between nature, artists and audiences

ARTITUTE: What particular dialogues do you hope will emerge?

SIM: I really hope that the conversations can revolve around the idea of humans having dominance over nature. Amongst the artists, some of the questions triggered by working in a natural environment include: are we continually trying harder to bend and manipulate nature to our will? Are we persevering to come up with solutions to environmental crises (whether they ultimately work or not?) Or are we even trying at all?

I began my research on Pulau Ubin (the island venue for the exhibition) at the start of 2014. My current investigations has been conducted with the help of Marcus Chua, who discovered greater mousedeer in Ubin. After gaining an understanding of the habits and habitats of these animals, I constructed structures for them. I wanted to upend the common notion of the loss of biodiversity in the face of  economic development, and instead build man-made features for animals in the name of modernity. 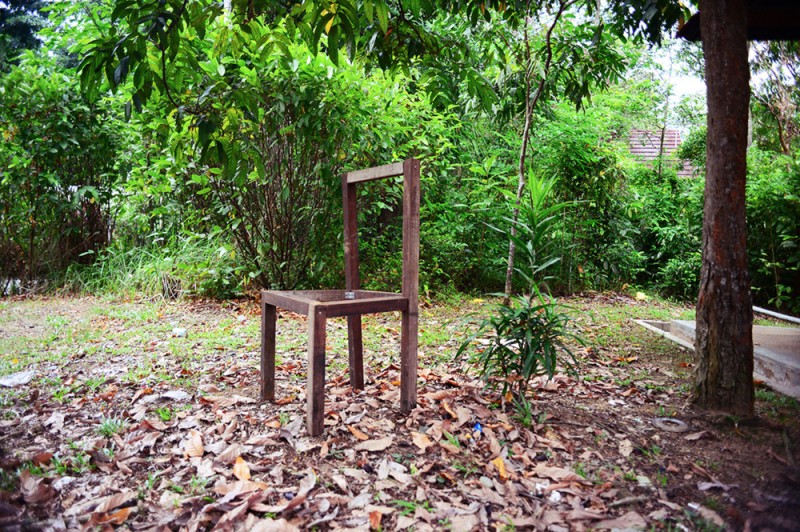 ARTITUTE: And how has working in an outdoor rural environment affected each of your artistic practices?

PANG: i think presenting a work in any new context inevitably has its influence. particularly this time with weather elements and material constraints. I see it as a catalyst to incite the concept rather – how can I still say what I want to say, with these amount of things I now have.

The structure I’ve made represents the artist as a guest, with the site as his host. This work portrays how I would prefer to interact with nature – leaving the latter untouched while maintaining my own identity.

KAREN MITCHELL: For me, so far my experiences working on installations have all mostly been site-specific. So not only do I have to consider the ideas presented in my work itself, but also how it stands within the space. This time round, the island and its predominantly green hues have made me think about my own colour palette. I wanted something that would stand out but still be part of the environment. To me, the greenery of Ubin represents the present and the living. My work looks into the future but at the same time reminisces about the past.

While weather presents an immediate logistical constraint, I am always interested to see the state of the work changes over time – how it evolves with external interaction, be it natural or through human action.

For this show, I’ve created an installation representing a portal inspired by time-travel, a dream-window into the possible futures of Pulau Ubin, and a way back to the island’s original form.  The use of crochet is a marker of time, just like the rings of a tree. 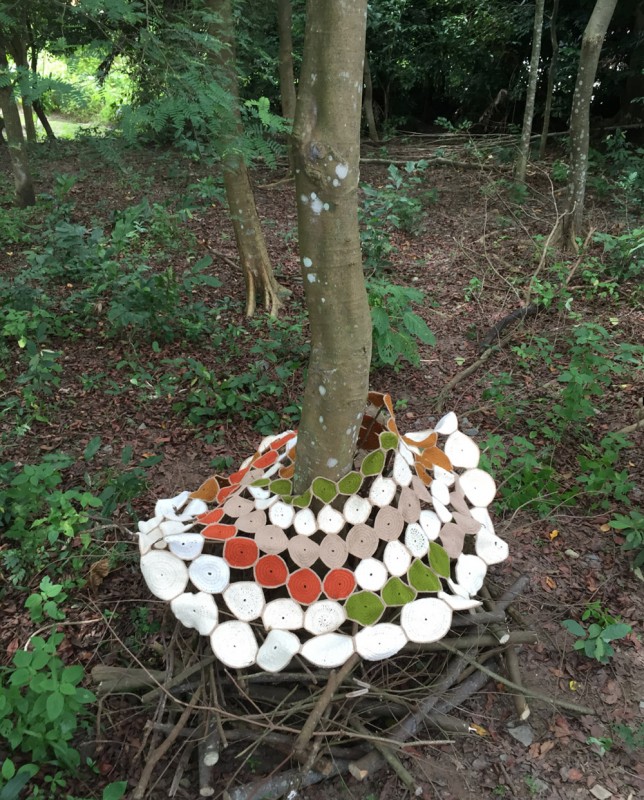 ARTITUTE: How has this experience shaped your own relationship with nature?

PANG: I think it’s made me realise that mankind was made to be part of nature. We attempt to tame it to reassert our control, but history has proven time and again that nature will take over what man has left behind. Nature’s resilience prevails, and we will only rest with great fatigue in our relentless act to control nature.

MITCHELL: This experience definitely has confirmed the reality that nature is the kind-hearted host and we are just the very thick-skinned guests, who have over-stayed. It is alright to co-exist, but the guests should really rethink about their behaviour. ARTITUTE: As the organiser, what are your thoughts on the role of the artist, and what would you like people to take away from this project?

SIM: I am not trying to judge here but I just feel that we are living in a transitional state whereby the old answers are no longer sustainable. We need to temper this hyper-rational view that economic development is way more important or critical than biodiversity, nature or even climate change. Having a few dollars will not help when the city we are living in is drowning.

Theaster Gates shared: ‘As artists, we’re always given the opportunity or we make the opportunity to say what a thing means.’ To add on this, there isn’t any role that artists can’t play, however we also need to accept that a commercial ad outreach is more efficient that an artwork, but that doesn’t mean as artists we need to abide with the mainstream.

We have lived in this competitive society too long, we forgot that it is okay to slow things down a little; the world does not come to an end if we don’t possess the material luxury that we desire. But the world will definitely come crumbling down if we continue to manipulate and package nature with a price tag.

For more information on the event, Facebook page: Working Title Not Working.