Chan Hampe Galleries’ last exhibition at its Raffles Hotel Arcade location closed earlier this month with a line-up of three solo exhibitions by four artists. The exhibitions which opened during Singapore Art Week in January  were curated by Khairuddin Hori and  brought together Kenny Pittock, Ruben Pang and the Le Brothers in three separate projects that were exhibited in various shop lots within the hotel arcade. Exhibition View – Kenny Pittock, She Smiled at Me

Kenny Pittock, is a Melbourne-based artist and his works are in the form of sculptures, drawings, books and paintings that are fun and light hearted. His maiden exhibition at Chan Hampe Galleries was titled She Smiled at Me and included all kinds of everyday material made of ceramic (a piece of gum stuck on a canvas; apples, oranges and avacados; a Lonely Planet travel guide to Singapore) as well as paintings, drawings and colouring books. At first glance, the works appeared childishly simplistic but the accompanying captions provided an alternate way of seeing and reading the works. 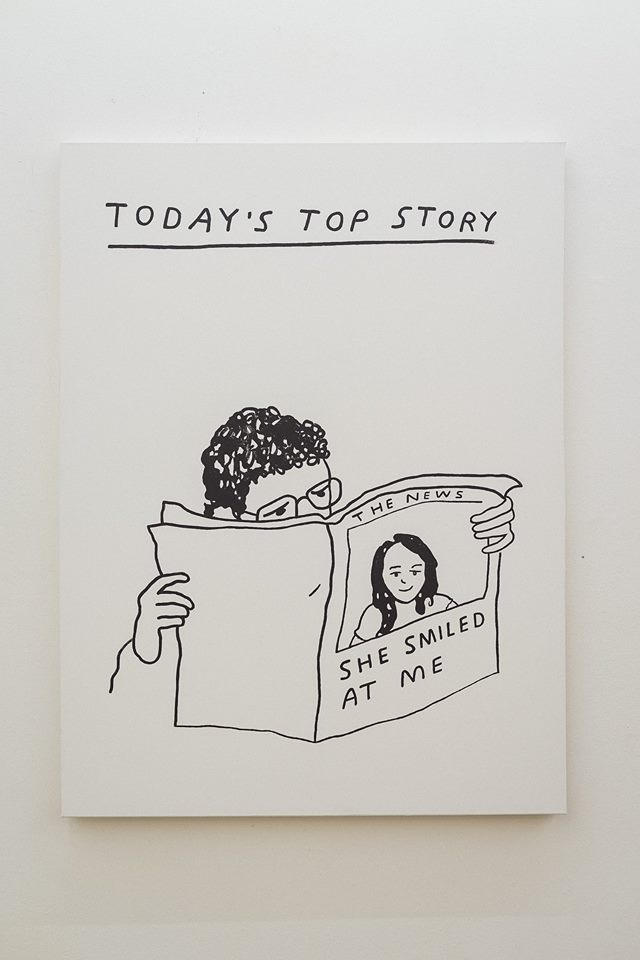 When asked about the show’s title Pittock explained: “I nearly called the show Single and Poor in Singapore, which I like as a title but it didn’t really fit the tone of the show. She Smiled at Me references the largest painting in the exhibition, which to me is a playful and sentimental look at the way we prioritise the importance of everything around us, (and our place within it). Like the work in the show, the title is simultaneously serious and silly.” 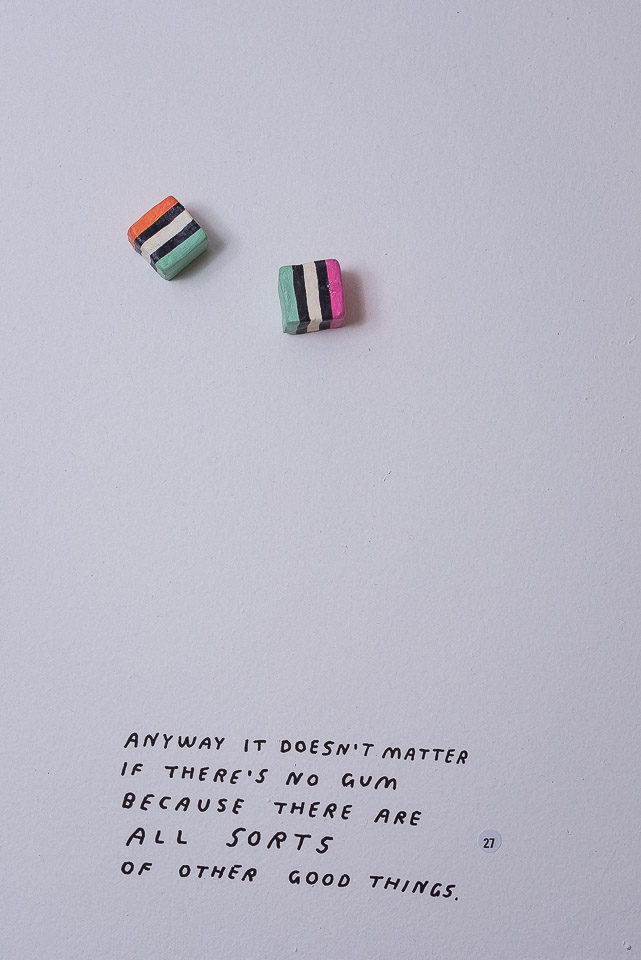 “Gum” and all things related to it featured prominently in the exhibition…. gum boots, Forrest Gump, bubble gumby – all alluding to the ban on chewing gum sales in the island. Pittock seemed to be pacifying gum lovers with a work that said “anyway it doesn’t matter if there’s no gum because there are all sorts of other good things”! 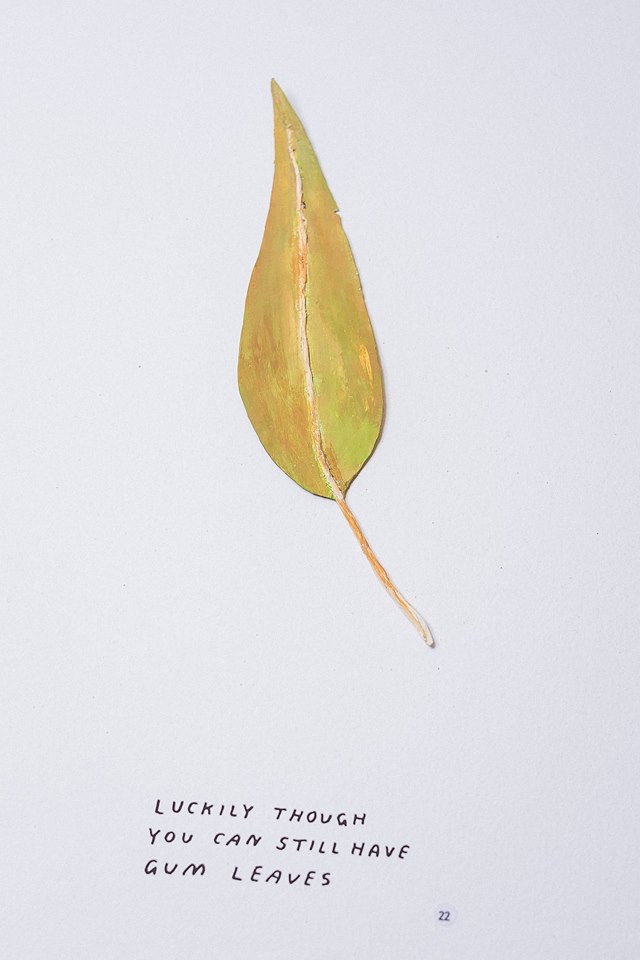 Pittock explains his fascination with chewing gum : “I was in a Singapore 7-11 and they had a whole range of souvenir mugs and tea towels with the heading “Singapore is a fine city”, with the word fine italicised and in red, and below the heading was a big list of things that are illegal in Singapore, including the gum thing. 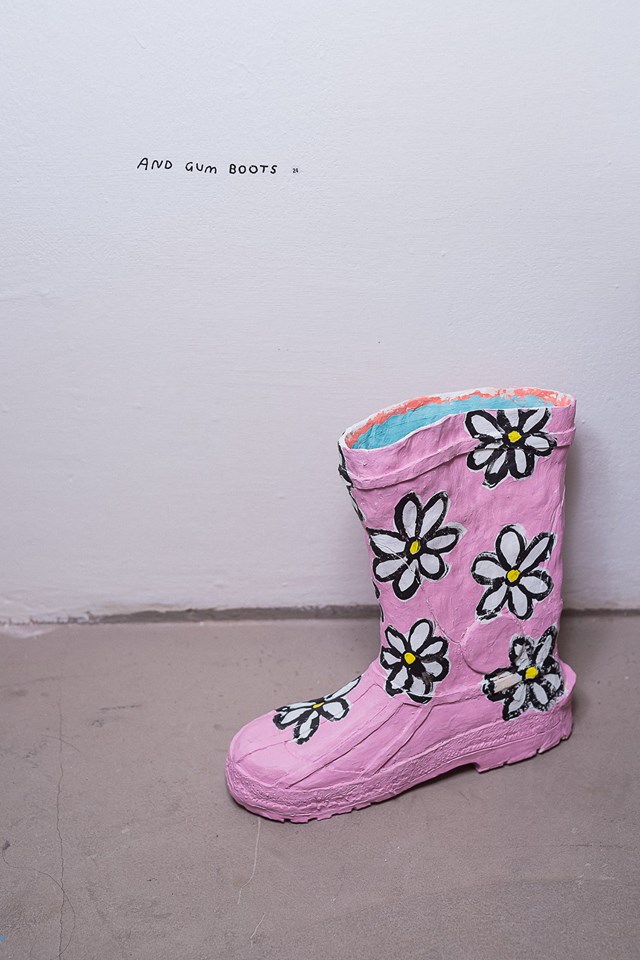 Besides the ceramic book, there were two “real” books too: a colouring book about birds and a limited-edition collection of 99 drawings of people whom Pittock encountered daily on his train commute to his studio near Flinders Street in central Melbourne.

The artist revealed that the main thing that he was worried about in Singapore was that it was illegal to eat on the train, which is something he’d done almost daily for over a decade. He adds: “In fact just last September I finished a project called Drawings of People Eating on the Train. So I was genuinely worried I might be on a train and start eating a banana just out of habit, and they’d lock me up and throw away the key.” 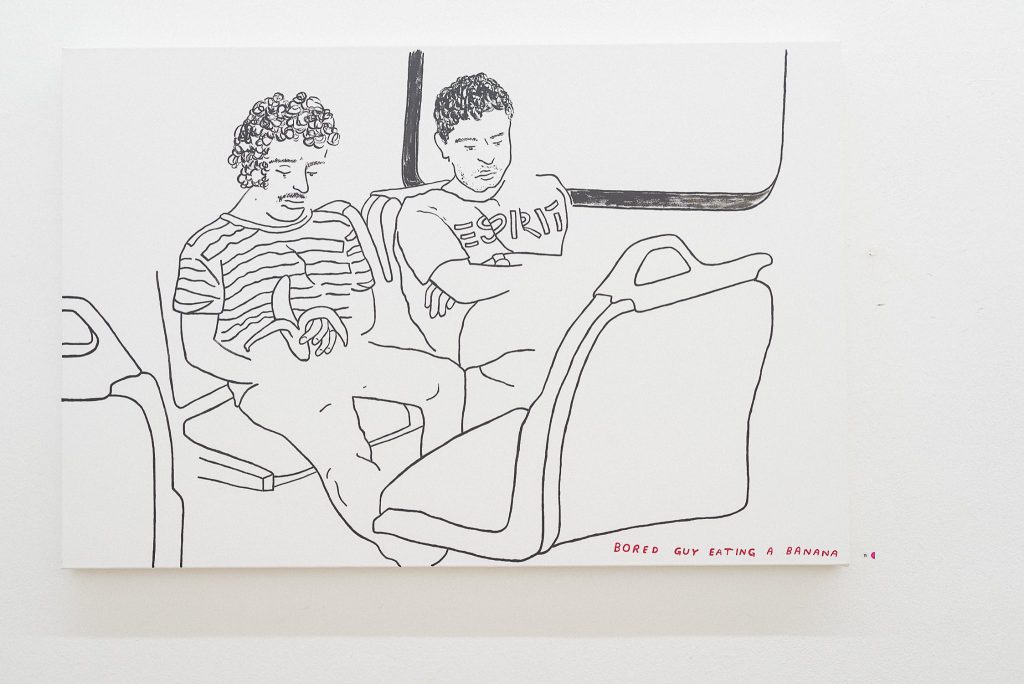 We asked Pittock, who has never been to Singapore before, what impressed him the most in this island city? “Mostly it was all the amazing people I met during my time in Singapore that left the biggest impression on me. It was a really special time and I made a lot of great friends. Also, I ate a durian, well, I tried to eat a durian. Far out, that certainly left an impression, and inspired a painting I’m working on called “The Picture of Durian Grey”. 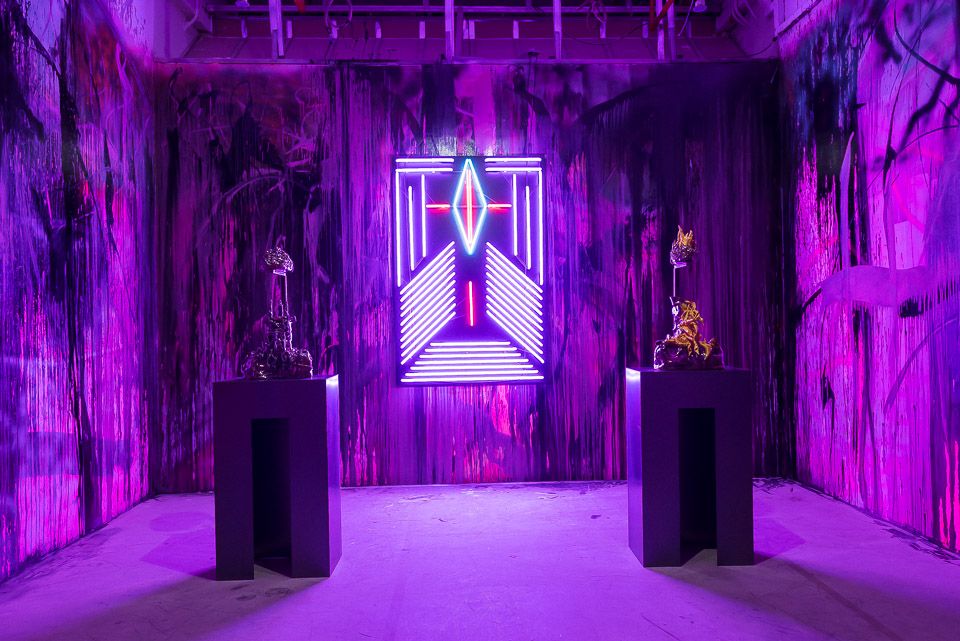 Installation view, Ruben Pang, A Totem for your Genuine Internals

Diagonally across from the gallery, in another shop space was Ruben Pang’s A Totem for your Genuine Internals. Not only spatially but visually and conceptually too, Pang’s work was quite contrary to Pittock’s. Unlike Pittock’s works that look outwards and observe the world, Pang’s installation was an inward reflection.

As you entered the gallery space what struck you immediately was how different this was from Pang’s usual oeuvre of ethereal paintings on aluminum. The space felt sacred and cultish …perhaps the pink-purple and black graffiti style painted walls that closed in around you evoked that emotion or was it the strange neon altar facing you that created this conflicting sense? The work drew you in and then wouldn’t let you leave as you tried to decipher the separate elements that made the whole. 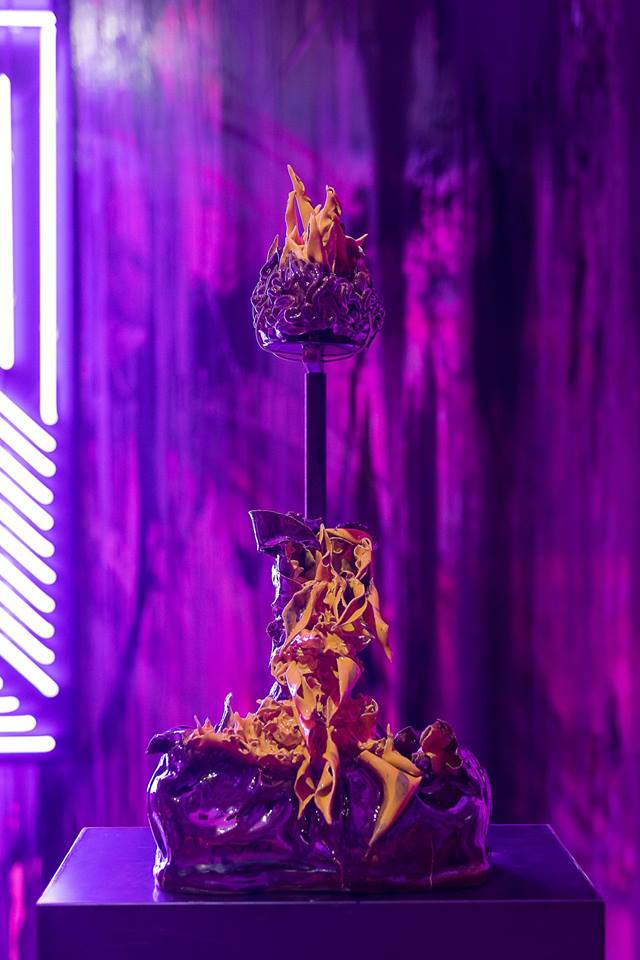 For this installation, Pang drew upon Chris Martin’s philosophy that an artist should avoid assessing his works as good or bad paintings, and simply see it as a work, that reflects a point in time. While working on this installation Pang was also reading Oscar Wilde’s Picture of Dorian Gray (where Gray’s flaws remain hidden from the public, while his portrait displays the unsavory elements of his character) and he said that all these elements drew him to the notion of confronting and accepting oneself. Pang elaborated that “I think we’ve all experienced times where we look in the mirror and see nothing but defects. And as an artist we look back at our past creations and only see what we’d rather have changed.”

Given carte blanche by the curator, Pang treated the walls with the intention of making gestures that he felt authentically and without thinking compositionally. He says he “did it quickly because I was very certain that if it mirrored what I was to myself at that moment, it had to be captured quickly. I stopped at the point where I could recognize myself in the present moment”. 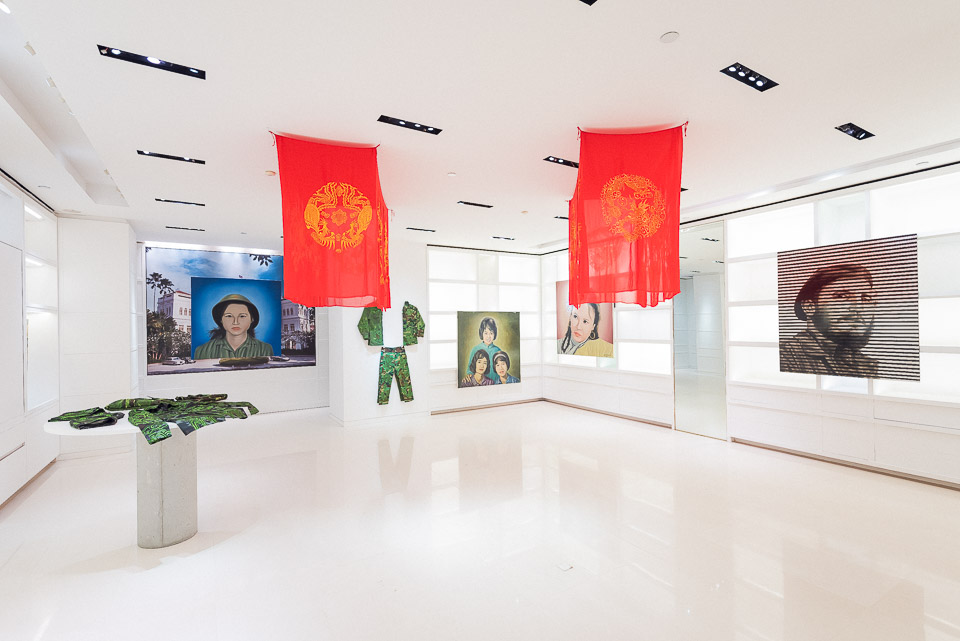 The third and last series of works at Chan Hampe Galleries was by the Vietnamese twin brothers Le Duc Hai and Le Ngoc Thanhe who are more commonly known as the Le Brothers. Titled North.Centre.South the exhibition included videos, installations and paintings that dealt with issues of post-war Vietnam. From the outside in, the war in Vietnam has been generally viewed as one between the North and the South. The Le Brothers who are based in Hue, a city which is in the centre of Vietnam, highlight the sentiments of those in the centre – caught between the differing ideologies of Hanoi and Saigon. 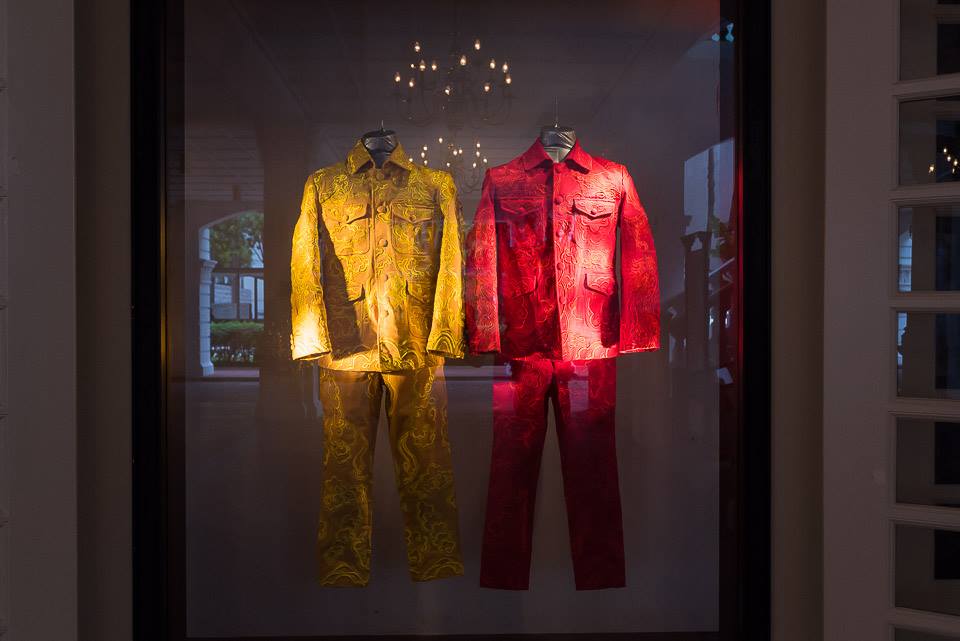 The Mao suit popularised by Mao Zedong, and synonymous with communist China is said to have been designed by a Vietnamese tailor for Sun Yat Sen when he visited Hanoi. Mixing Japanese, Chinese and western elements the suit has become an icon of communist doctrine because of its association with Mao Zedong. The Le Brothers appropriated this suit by reproducing and wearing them in red and bright yellow – colours of Vietnam’s national flag. Unlike the Mao suit, these outfits were embroidered with motifs of the dragon and phoenix and a set had also been made in military camouflage. 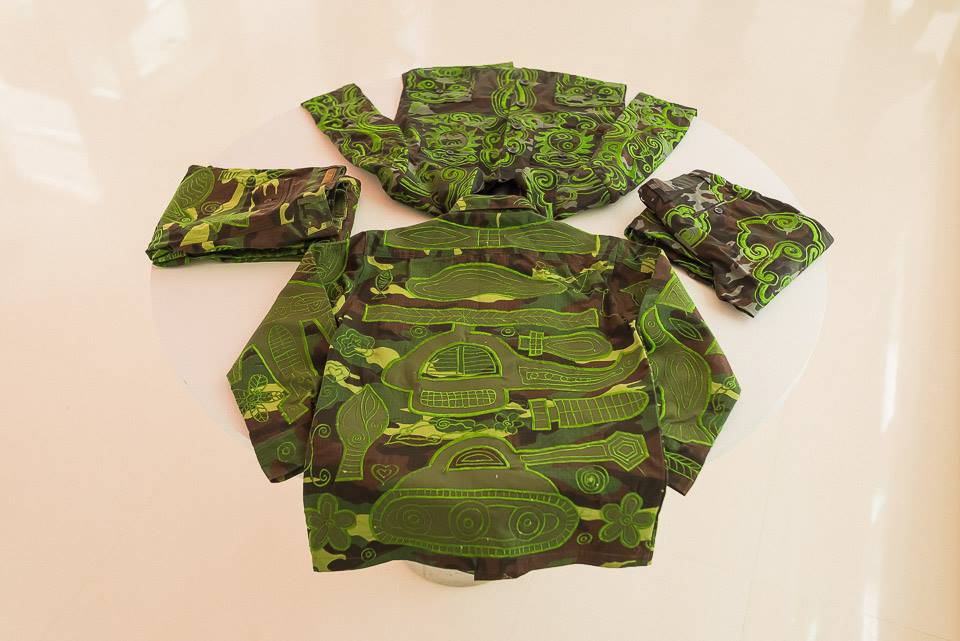 The military imagery re-appeared in The Game Project as motifs that had been cut and patched onto the two uniforms of the People’s Army of Vietnam (North Vietnam) and the Army of the Republic of Vietnam (South Vietnam). Interspersed with symbols of peace, like birds and flowers the motifs were cut in duplicates from one uniform and stitched onto the other. Originally signifying opposing factions of the country, these uniforms continue to evoke painful emotions of the past and point to the desire for peace and a true union of the Vietnamese people while the stitches alluding to the process of healing. 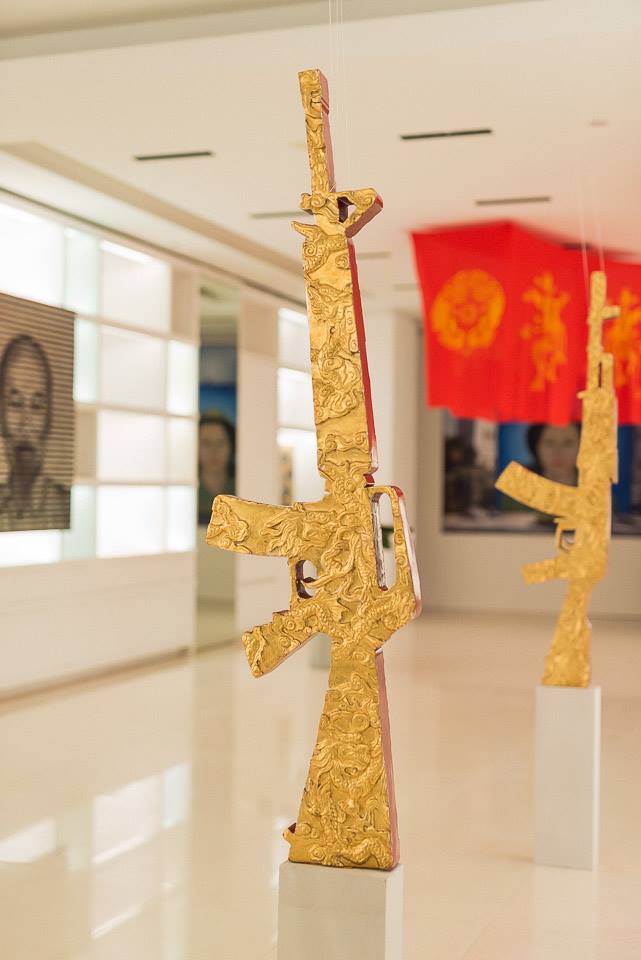 The Bridge Project, a 5-channel video continues the narrative from the Le Brothers project “The Bridges of Vietnam, Korea and Germany”. Illustrating a post-war and post-communist consciousness, the work documented a performance by the twin brothers on the borders of the three countries that navigate a North-South/East-West identity. It showed them dancing with local artists and passersby and explored the consequences of living under a communist rule even if the governance and rule of law had changed.

The multitude of projects and works by the Le Brothers are overwhelming. The past seems to have a tight hold on the artists’ consciousness even though they were born post war. But the serious themes of their works are offset by a playful and humorous style – a device that is used by Pittock too.

Chan Hampe Galleries is now Chan+Hori Contemporary and moves to Gillman Barracks this month. More information on upcoming exhibitions can be found at http://www.chanhori.com/