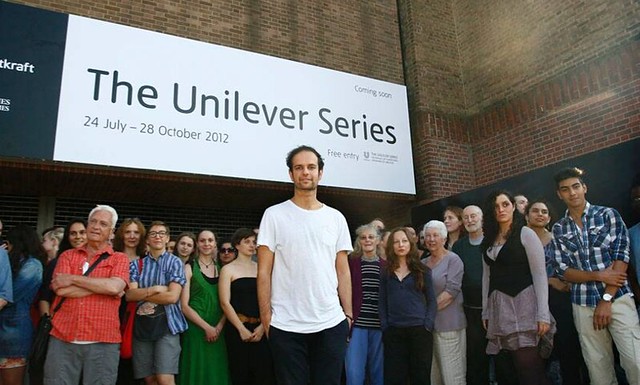 The 2012 Unilever commission for the Tate Modern is unprecedented. For the first time in the history of the yearly commission, no tangible art object will be displayed at the Tate Modern’s Turbine Hall, an expansive space that welcomes visitors to the Tate. Instead, Tino Sehgal, this year’s commissioned artist, has created a, for lack of a better word, performance piece. (My hesitance to term Sehgal’s piece a ‘performance’ stems from the artist’s own aversion to that classification.) Ephemeral and unable to be captured on a concrete medium, it breaks the distinction between art object and spectator, destabilizing the bourgeois pedagogical paradigm of art institutions. Undocumented and experiential, “These associations” left me in awe. Agreeable or not, Sehgal has now inducted himself into the prestigious roster of predecessors including Ai Wei Wei, Louise Bourgeois and Bruce Nauman.

Moving past the sensationalism of unorthodoxy, These associations totally and completely dissects and re-examines the artist-spectator relationship. From my personal experience, performance art is meant to be uncomfortable, intrusive, and spatial. It entices and incites a response from the neutral, static spectator, whose bourgeois role of the past was simply to observe and be enlightened and edified by art objects. Through the activation of independent agency and thought, the spectator morphs into a dynamic participant, blurring the line between performer/artist and spectator.

Architecturally, because the Turbine Hall begins where visitors enter the Tate, I was unsure whether the group of people I saw moving in what seemed to be a choreographed circular dance were performers in Sehgal’s piece or not. Confronted with the immediacy of the situation and space, I was already unwittingly immersed, mixed in with the performers as part of the puzzling piece. Many fellow visitors adopted a static, observatory perspective, choosing to sit by the sides or stand at the overhead bridge to witness this strange choreography. Deciding against safety and comfort, I joined the performers, walking amongst them, actively engaging in intensely personal conversation about loss, emotional deficiency, existential epiphany… the list has endless permutations not just because each performer seems to have rehearsed a unique anecdote but also because each visitor experiences this piece differently. The performers who spoke to, stared at and surrounded my friend did not necessarily interact in a similar fashion with me.

While a performer and I were discussing the ugliness of the human condition, she saw my friend video-recording our conversation and warned against the futility of doing so. “You’re not going to get anything from it you know. This is a private conversation”. In the midst of the giddy transience of singing, shouting, dancing, walking, running, conversation and stillness, I had lost sight of the fact that each conversation you have is deeply personal. Topically, the anecdotes are personal experiences and realizations, particular and precious to the performers. The Turbine Hall is undoubtedly a public space, but one that has now been transformed to foster and expedite the particularity of stranger-relations. In the words of a friend who strongly encouraged me to experience (not watch) this performance: “this project reveals how much people actually long for meaningful encounters.”

From today’s profound physical, spiritual experience, I confidently assert the importance of spectator participation in performance art. Only then can one gain a truly meaningful encounter. In an interview with Artforum, the artist himself attested to the ability of involvement to ‘empower the viewer’. Don’t be ‘scared’, as I heard many a visitor whisper. Instead, step into the wholly different, inclusive world of These associations. It only takes one word, gesture or movement. Whichever you prefer.