‘Five Minutes With Nicola’ is a column where two artists have a conversation, to bring you the inner workings of the creative mind.

Whilst in London, Nicola Anthony visited Singaporean artist Jason Lim’s durational performance Inside/Outside, which is part of the international touring showcase of Singapore’s contemporary creative disciplines, ‘Singapore: Inside Out’. 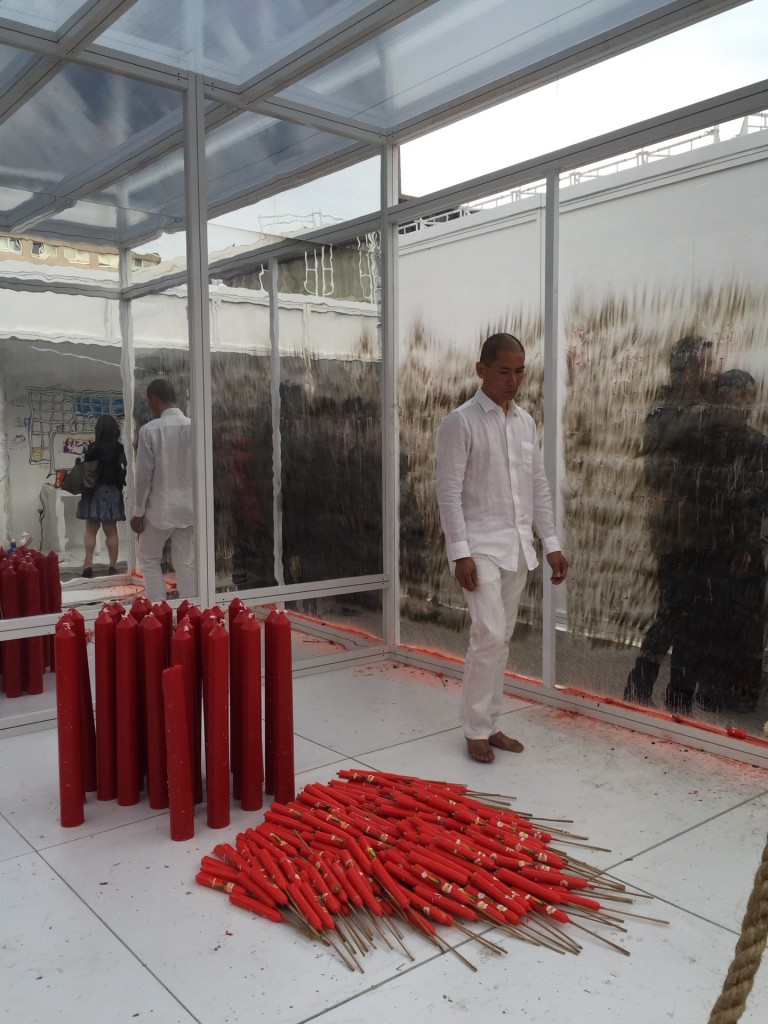 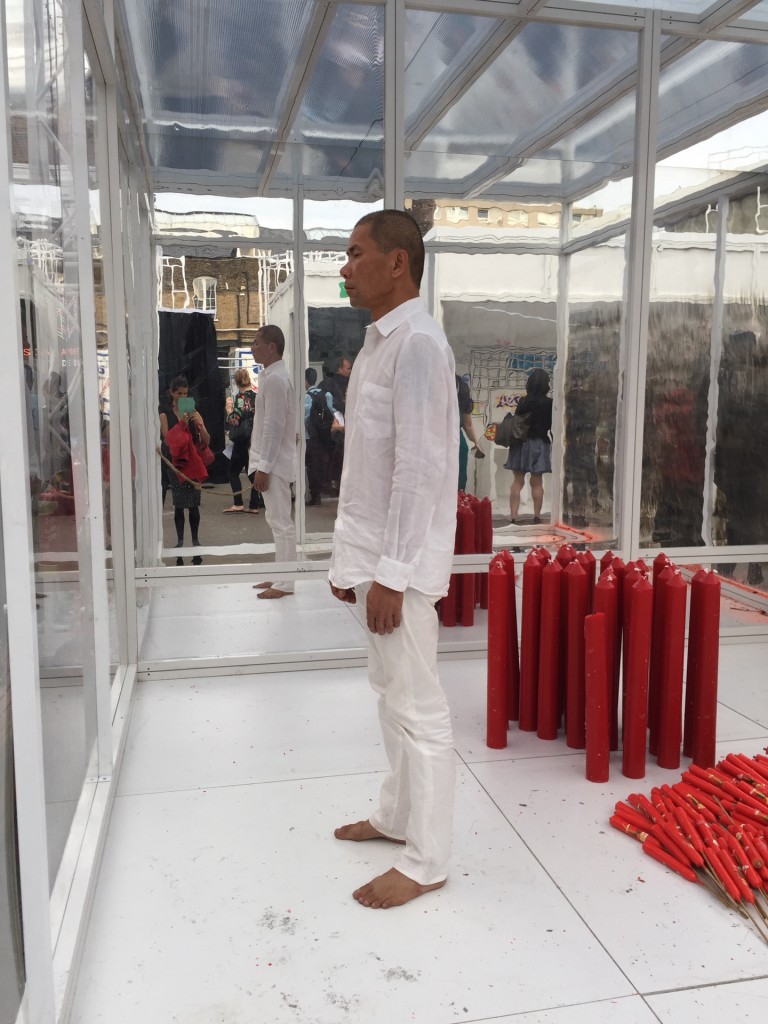 On my recent travels I had a whole new experience of London. I was embraced by the local Singaporean scene in this city which was my UK home for many years – my two wonderful worlds came together inside the space of Singapore: Inside Out.

A slice of Singapore landed in Brick Lane – the heavily graffitied, gracefully decomposing, old quarter of East London which in many ways is so opposite to the Little Red Dot. Contrarily, there were also resonances in this site possessing a rich history of migration, Asian influence, and newcomers becoming absorbed into the fabric of British culture. It has been the Little India of London, welcomed all manner of outsiders, been a site of tension, as well as more recently oozing creativity from every fracture in its disheveled shop fronts.

In the architectured space of Inside Out (designed by award winning Singaporean artist and architect Randy Chan), I was mesmerised by the performance artwork of Jason Lim. You may also know him as one of Singapore’s top ceramists. To find out more about his artwork and the creative process behind it, I invited Jason to give us further insight. 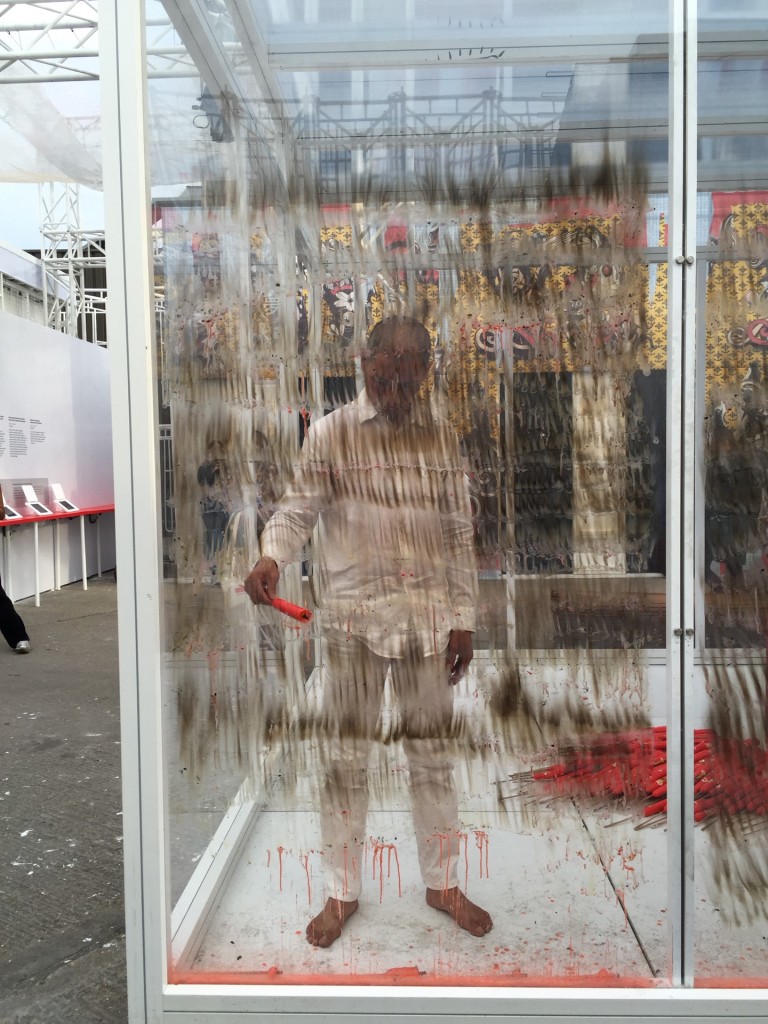 Nicola Anthony: Could you tell us a little about the work, the unusual materials and what they represent in the piece?

Jason Lim: The inspiration for this piece comes from how we perceive the exterior and interior (physically and metaphorically) therefore the title, Inside Outside. I am interested with this image that I had in my mind of how a transparent ( to be read literally and metaphorically) box through a series of accumulative and progressive performances and processes transforms into something ‘dirty’ and non- transparent. Using candles as a material is not unusual in my performance practice as I have used candles before in a series of performances entitled Duet with Light. In that series, I used smaller yellow colored candles. I understand that the reading of the red candles can be quiet different and has many connotations but my choice of these candles is for three main reasons.

1. The use of red candles and me outfitted in white provides a meditative context.

2. Red and white are symbolic of our national colors.

3. For technical reason, these are the only candles that burn with soot.

The marking of the surface with soot and melting of wax shows the passing of time and this material illustrates the point in a visually poetic manner. It is interesting that the binaries of destruction and creation, clean and dirty, disappearing and appearing and ephemeral and permanence occur naturally in this piece. I hope to slow down the time for the audience,- instead of feasting their eyes on the general picture, I want them to take time off to focus on what they choose to see – the markings, details, wax dripping, candle flame, being still with me even for a minute. By doing that, the mind becomes quiet for a few moments which is so precious in this fast moving, image and information craving world. 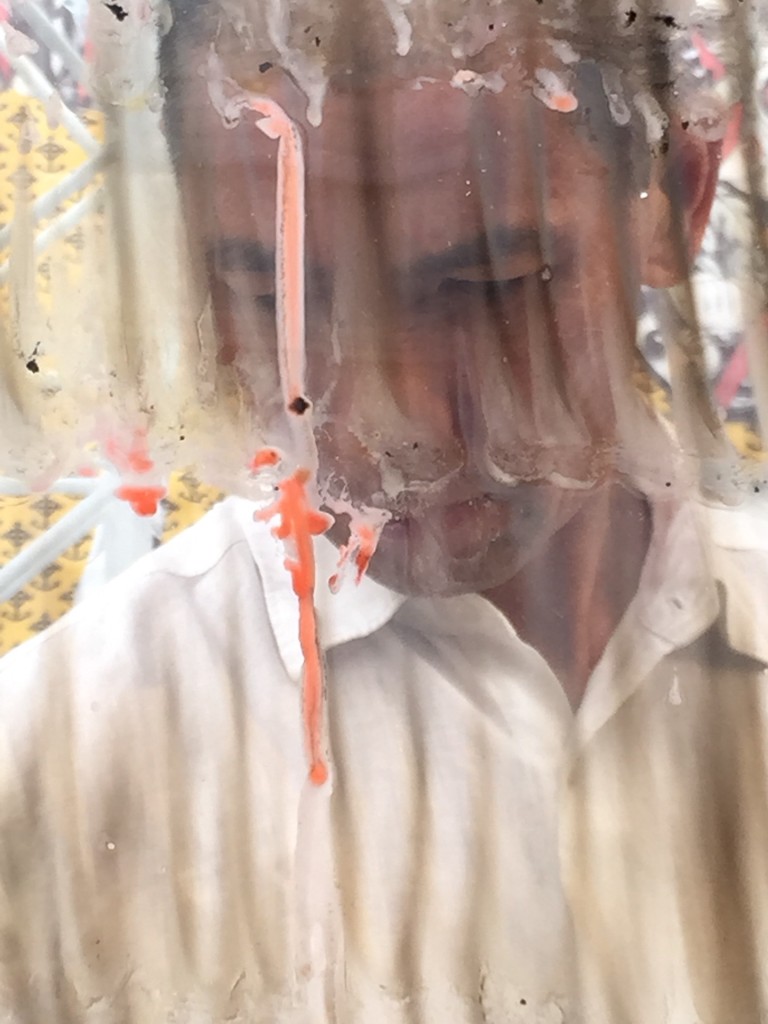 Nicola Anthony: It feels that this artwork, rather than being seen as four separate performances, will simply continue as the same artwork, but in four geographically diverse places over the course of 25 days. Have there been different reactions dependent on differing locations and cultures?

Jason Lim: So far this performance has been to two cities, Beijing and London. From what I hear from the audience sometimes (sometimes I loose focus and come out of my meditative state), the audience in Beijing are more curious and amused, asking question without trying to understand.  Whereas in London, I feel that there is more understanding or at least they work harder in trying to understand the work. I think the reason being that the performance art genre has had a longer history in the English culture than in China.

Nicola Anthony: Performance art is often very sensitive to its surroundings and audience. Have these elements of place and people made you feel or perform differently in any locations?

Jason Lim: Most of the time I am quite focused with my actions whether I am in the process of sooting the acrylic panels or in moments of stillness. I try to cut off the awareness of the audience around me and focus instead of the space that I am in and on the task at hand. For me, the markings on the panels from the two cities shows some distinct differences. The wind/draught aids in the burning of the candles and the directions of the flame. The panels created in Beijing were darker and the soot marks straighter because there was less draught and being the first venue, I spend a longer time getting to know how to use the material more efficiently. Those in London, the markings are all slanted because of the light breeze and also posed a challenge for me to get the markings done.

Nicola Anthony: As well as the physical endurance, it must be quite emotionally or mentally intense at times? To me it seemed like such a powerful and also meditative piece, that I was wondering if you had personally found any new meanings/interpretations of the artwork, through the process of performing? I hope you don’t mind me asking this personal question, I think it is often fascinating to look inside the artist’s mind to see how the artwork evolves but rare to have access too.

Jason Lim: The original proposal for this work was a performance piece for a duo or duet piece, with my ex-partner, working in sync with me either inside or outside the space. At times, I did wish that this piece was executed that way. Through the meditative process during the performance, I tried to let go of thinking what could have been. The process has been very challenging and I worked hard in making use of how I am at the present stage of being, purging my suffering from within and aiming for the outcome to be abstractly poetic.

Nicola Anthony: Finally, this work was part of the Singapore: Inside Out which curated artists and performers from Singapore into the pop-up architectural space. One of the intentions of the space is to gently introduce Singapore to the rest of the world through its arts culture.

I am keen to know how this fits with you as an artist, as on one hand it could be a bit jarring to be showcased as a representative, on the other hand of course an artwork is always presented to communicate something, so perhaps it felt very natural?

Jason Lim: I am honored to represent the visual arts segment of Singapore in this project. Randy has followed my career closely for many years. I trust that his choice in choosing me for this project is one with appropriate intention and not by token. As a performance artist, I do not find this  situation jarring because in many other international events that I have attended, I am deemed as a representative of the country that I come from.

Nicola Anthony: Have you had any findings about how others learn about our culture and us theirs? Any memorable moments or reactions?

Jason Lim: The main feedback and comments that kept coming up when I was talking to the audience is that they are surprised by the diversity and high quality of artistic standard in  Singapore. For many, they find it mind boggling, that for a country with tight policies and control, it has so much creativity coming out from it.

Find out more about Singapore Inside Out: http://singaporeinsideout.com/