Maiko’s black and white art works depict mythical creatures who dwell in the mysterious realm of the unknown and compel the viewer to confront the human fear of the dark. Now exhibiting at Nikei Fine Art at Raffles Hotel Arcade till 30th November 2013.

Maiko Kitagawa, a young Japanese female artist, is known to fascinate art lovers with her fantastical black and white art works. Nikei Fine Art at the Raffles Hotel Arcade will be exhibiting her creations from September 4-November 30 2013. Only 30 years old, Maiko is an up-and-coming new talent who is currently a student at the Tokyo University of the Arts. 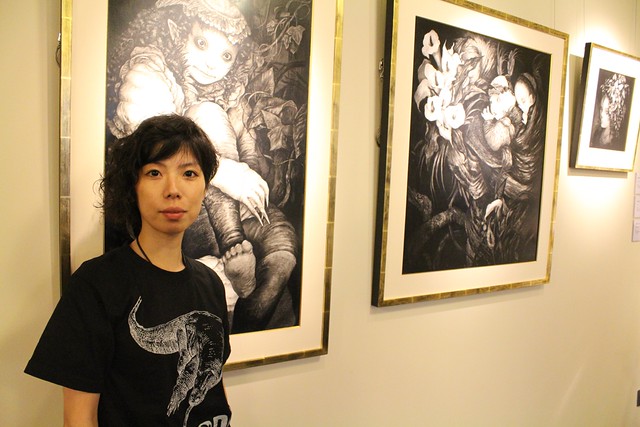 Maiko’s black and white art works depict mythical creatures who dwell in the mysterious realm of the unknown and compel the viewer to confront the human fear of the dark. “’The mysterious sense of someone’s existence’ and ‘fear of the dark’ are the general motifs of my art and I believe that black and white are most appropriate medium to express such themes,” Maiko says, “The experience of my artworks for viewers is like that of gazing into obscurity and gradually seeing various creatures hiding in the forest as their eyes adjust to the darkness.” 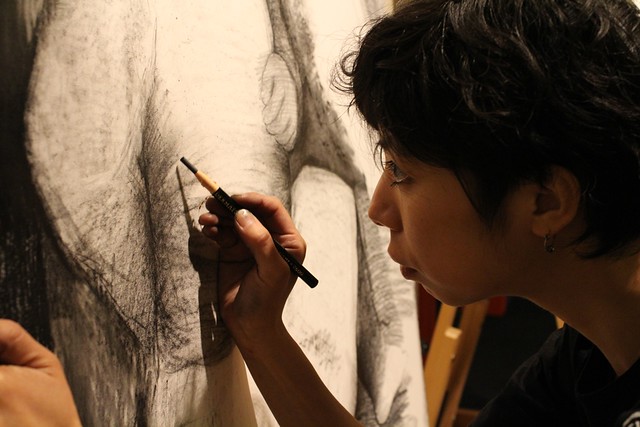 Maiko is inspired by both Western and Japanese fairy/folk tales. Storytellers from the West that have influenced her include Charles Perrault, the Brothers Grimm and Aesop, while Japanese writers that have moved her imagination include Kenji Miyazawa and Kunio Yanagita. Maiko read a lot as a child and she always had the feeling that the imaginary world in the books really existed.

When asked to describe her style, Maiko replies with one word – “black”. Maiko is fascinated with darkness. “Since young, I can always sense someone or something in the dark. It’s a feeling of anticipation, that there’s an imaginary world in the darkness. I always felt like this when I was a child and the feeling still stays with me to today.” 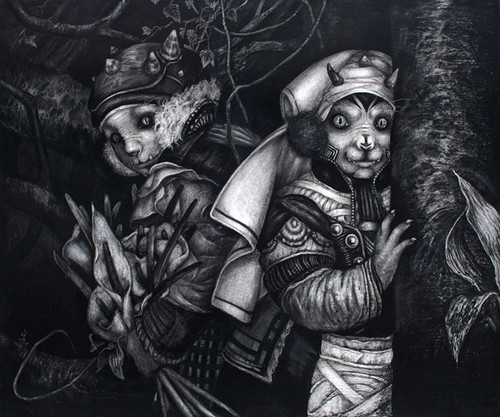 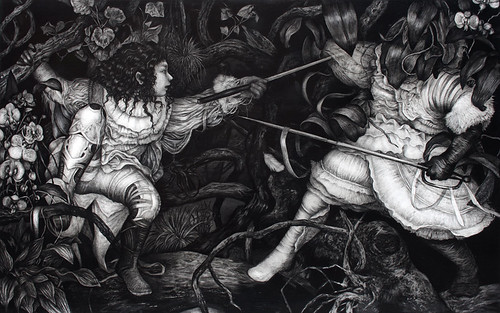 Maiko has a deep reverence for animals and that is reflected in her art. “I believe that animals have a higher existence,” she says. “I don’t see them just as things you can keep as pets. I believe that animals can take control over the world and have powers over humans. I see animals as more powerful, stronger and more beautiful than myself.”

Most of Maiko’s art takes place in the forest and that may be because Maiko lives next to a forest, in the Saitama Prefecture an hour away from Tokyo. “When you enter the forest, the temperature drops, making it feel ominous,” Maiko says. “The forest feels like a very different space, different from where I usually live, it’s a special space, full of shadows and darkness.”

Maiko enjoys keeping active and her hobbies are intensely physical – she enjoys mountain biking in the forest near her home and kendo.